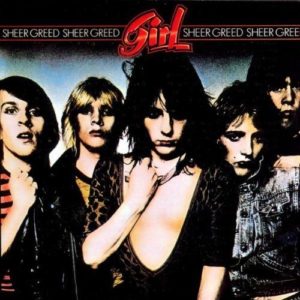 For those unfamiliar with the band, or perhaps not old enough to remember this album’s original release, it has four tracks that are incredibly strong – with each showcasing the individual musician’s talents very well. The band’s glammier aspects come across excellently on ‘Lovely Lorraine’, an excellent driving rocker that casts these London lads in the “classic Kiss” mould. The main riff comes straight from Paul and Gene’s 1974 debut and it’s got a sound and style that Girl seem to emulate very naturally. With a brilliant riff augmented by a couple of absolutely killer solos from the young Phil Collen, a world of gang vocals and a short and sharp duration, it instantly has it all. Girl show how they’re a little more talented than mere copyists by injecting an off-kilter pre-chorus with an unexpected power pop twist and some great drum fills along the way, resulting in a superbly trashy number.

Another essential listen, ‘Doctor Doctor’ conveys some fantastic, punchy hard rock that’s sympathetic with both Lewis’s unrestrained lead vocal and the glammy gang vocals that swell throughout the chorus. It’s one of those tunes that proves you don’t have to be clever to make an impact and by the time Collen steps up with a really aggressive (and busy) solo, you have to wonder why this track isn’t considered an early 80s rock classic. The rather fine ‘What’s Up’ showcases some furious bass work from Simon Laffy while Phil Collen and Gerry Laffy go for maximum force in the guitar department. The combination of speed, melodic aggression and Lewis’s carefree vocal are often reminiscent of Sweet’s noisier offerings, which sounds especially good when fused with a little metallic bluster. In lots of ways, this represents what Girl always did best.

The early 80s had more than their fair share of UK bands harbouring obsessions with the USA (with Def Leppard’s ‘Hello America’ providing one of the best and most blatant examples), and Girl, too, looked overseas for influence on the superb ‘Heartbreak America’. It mightn’t offer quite as much youthful joy as the Leps, but there’s definitely more of a transatlantic sound at play. Those with a keen ear should be able to pick out an influence or two from the brilliant Starz and this power pop/glam hybrid is perfect for the band. There’s three minutes of pure melodic rock gold here – almost enough to forgive the album’s obvious misfires. Laffy and Collen really gel in the guitar department; Lewis offers his most confident performance on the entire record and the use of gang vocals on a huge chorus is enough to make this a winner from first listen.

Outside of those tracks there’s enough to entertain, even if the end results don’t always equal the amount of enthusiasm put into the recordings. Showing off a keenness for variety, ‘Passing Clouds’ explores the era’s fascination with white guys channelling reggae influences. To be fair, following a slightly wobbly start, it’s something Girl do well enough. The track shows Simon’s bass playing has plenty of muscle (he’s mixed a little too low on at least half the album) and the way a standard reggae rhythm is adorned by some lovely twin leads certainly makes this track worth investigating decades after the fact. At the time of release, The Police were reaching their commercial peak and 10cc’s chart topping ‘Dreadlock Holiday’ was still heard with some regularity, so it’s a track that makes more sense when placed in a period context.

While ‘Lovely Lorraine’ offered a great stab at a Kiss homage, the band doesn’t do such a convincing job on their cover of Kiss’ ‘Do You Love Me’. Again, Collen’s input is decent enough, but the way Lewis curls his voice through every syllable is a little irritating. Obviously, over familiarity with the original doesn’t help its case, but Girl too often come across like an enthusiastic pub band here. It’s worth hearing for some excellent twin leads – something Kiss failed to exploit anywhere near as well – but that’s about all it’s good for. The album’s weakest track, ‘Strawberries’, is very much an acquired taste. A robotic riff overlaid with sharp tinkling guitar noises wears thin after a couple of minutes and while the lead guitar solo has a great tone, it really isn’t enough to save face. It’s hard to know what the band were thinking, but given the amount of new wave sounds that were in vogue at the time of release, it probably made more sense back then. In the twenty first century, this hybrid of UFO and The Cars (at their most obtuse) seems incredibly forced. You’ll have heard worse things for certain, but in terms of keeping up the album’s momentum, it’s somewhat of a misfire.

Luckily, ‘The Things You Say’ adds a little more quality with a selection of moody, disjointed riffs. It’s possibly not entirely intentional, but the way the number plays out with a tough yet simplistic stance carries a faint echo of The Runaways – more specifically the darker aspects of their debut from 1976. Lewis’s lead vocal has an odd slurred presence, reinforcing the weird and sleazy mood that cuts through the track, while Dave Gaynor’s flat drum sound lends the arrangement a very natural punch. With a cool verse in place, perhaps some concession to an actual chorus hook would have been useful, but as it is, between the solid riffs, sneering attitude and a well crafted guitar solo, it very much holds its own. ‘My Number’, meanwhile, kicks off with a solid chuggy riff. Something that carries through the bulk of the track, it could be seen as the band experimenting with new wave influences. It’s very simple, but also very effective, especially in the way its used as a base for Collen to throw out huge lead guitar sounds along the way. Factor in the semi-brattish lead vocal and some spiky gang vocals filling space, it’s all a little of its time, but no less enjoyable for that.

Another of the album’s weakest links is the chosen single. ‘Hollywood Tease’, from a musical perspective, is fantastic. Inside of three minutes, the band’s youthful energy comes across – and even more so than on some of the other numbers. The guitar tones and all round heaviness are a fairly solid fit with the NWOBHM scene, occasionally echoing the faster tracks on Def Leppard’s ‘On Through The Night’ album. Lewis’s lead vocals are more than assured, Gerry Laffy’s rhythm guitar work has plenty of drive and Collen’s lead guitar work is flawless. The problem stems from the lyrics: a three minute celebration of being the dominant force in a manipulative, almost abusive relationship is particularly crass from the outset, but one of the final rhyming couplets (“I can be sarcastic / I’ll treat you like a spastic”) is unforgivable. Yes, of course, in some ways we can sweep this under the carpet and label it with “outdated attitudes”, but that wouldn’t be entirely appropriate since the use of that word in such a flippant and derogatory way was not especially acceptable in 1980 either. [Joe Jackson’s ‘Sunday Papers’ missed out on a top 40 placing the year before; it should be assumed that this was due to a similar disability slur, also used for shock value. After all, Jackson was far more marketable than Girl would ever have been at that time.]

‘Little Miss Ann’ shows off another solid rhythm from Gaynor, setting up a grubby hard rocker that could definitely be considered one of Girl’s better tunes. While various guitar fills are a highlight, the true star is Phil Lewis, as he tackles a sassy proto-hair metal vocal that pre-empts his fame as mouthpiece for L.A. Guns, while the quirky ‘Take Me Dancing’ comes with a brilliant groove laden riff, pushing Girl into UFO territory. The way the riff dominates the strutting feel, it doesn’t matter too much that Gaynor’s drumming is a little stiff in places and the use of melodic backing vocals gives the track a real lift when and where needed. If not for ‘Heartbreak America’ and ‘Doctor Doctor’s towering status, this would have been an album highlight.

‘Sheer Greed’s original release in January 1980 came too late to make a connection with the fringes of the UK glam scene and about eighteen months too early to capitalise on the US glam revival and burgeoning hair metal scene. In some ways, Girl were out on a limb stylistically, and although the album yielded no hit singles it peaked at #33 in the UK LP chart. Never destined for classic status, it least found a connection with more than a few hard rock fans at the time – and it’s definitely worth revisiting…warts and all.

[‘Sheer Greed’ was reissued by Cherry Red Records/HNE Records in 2019. The hard to find ‘Live In Osaka 1982’ was also included as part of a deluxe 2CD set.]

Further reading:  Def Leppard – On Through The Night