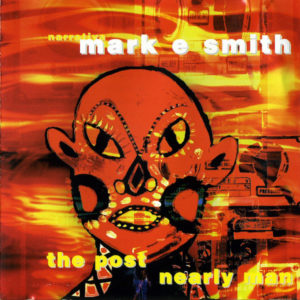 “Modern Energy…and what it means to you and I” spouts Mark E Smith at the beginning of one of the tracks on this CD. A man with a skewed take on life, you may be forgiven for thinking a spoken word release from The Fall’s front man (and only constant member) could be an interesting prospect indeed. He goes from mentioning energy – something this collection of ramblings severely lacks – to mentioning Richard and Judy and then “Fred West’s sweaty family” in the space of less than a minute. As he does so, it becomes obvious that rather than being an outing of interesting beat or slam poetry as championed by Tom Waits, Henry Rollins or that under-rated wordsmith Mike Doughty, this is little more than a vanity project from a man who’d rather confuse and frustrate than entertain.

Most of the pieces on this CD feature just Smith’s drawling voice (which at times sounds like a self-parody, complete with ‘…ah’ uttered at the end of his lines at semi-regular intervals).  Sometimes, though, there’s musical accompaniment, but it’s hard to say whether this was designed for this on purpose, or whether it was leftover music just thrown in to relieve the boredom. You’d think that any kind of musical accompaniment would add colour, but it’s largely ugly, Casiotone nonsense.

‘The Horror In Clay’ touches on the workings of the human mind at the outset, but that’s only because Smith quotes from HP Lovecraft. After a clanking noise, the listener is thrown into a montage of tapes containing bits of random speech recorded on a tape deck, complete with hiss. At times, the speech is drowned out by aeroplanes overhead.‘Visit Of An American Poet’ (split into two parts) may sound like an anecdote about meeting a mentor, but instead, it’s a collection of seemingly unrelated words which barely make sentences. Throwing in an echo fails to make this any more interesting; it just masks the delivery. This is punctuated by a jarring keyboard noise, over which a woman asks ‘why is there so much shit music?’ There are sounds of conversation, but aside from a couple of uses of the f-word, and “…American poet…plagiarism…“, it’s near impossible to make out any intelligible words. Smith then comes back with some specially written prose: here he talks about Hitler and a dolphin restaurant but follows it with some other mostly incoherent stuff. The music stops and Mark begins to shout. It’s still gibberish, of course. Move along, there’s nothing for you here.  When his voice returns for the second half, there’s a mention of a radiator, three people, a girlfriend and a can of fifty-nine pence beer. I suspect it makes no sense to anyone but Smith.  ‘Typewriter’ as the title suggests, features a dominant typewriter noise with some speech thrown in, as if someone is doing dictation. It’s rather pointless again, although it has a pleasing bass riff in the middle…but it’s fleeting.

There’s about another half an hour or so of bits and pieces on this CD, pretty much all of which is difficult to digest, let alone pretend to be entertained by.  Even the most patient Fall fans among you will struggle to find any real coherence in anything Smith has written much of the time; at some points he’s even reading out the punctuation, as if it helps give this any real structure. Smith seems to delight in being difficult and it is likely he loves the deliberately impenetrable qualities ‘The Post Nearly Man’ offers.

On paper, this recording should be something of great interest to the Fall fan – something to lend a closer working of the thought processes that power many a MES lyric.  In reality, it’s pretty frustrating.  For Fall completists only…and even they should approach with caution.