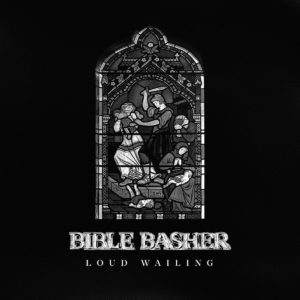 That’s exactly what Bible Basher have done on their 2020 cassette ‘Loud Wailing’. Its four tracks take different aspects of the religious text and use them for lyrics, while the band churns out riffs so slow, the music makes Kurokuma and Morag Tong appear somewhat frivolous. The religious concept is laid on especially thick too, by opening the EP with a sample of an evangelical charlatan, leading into ‘So Samson Sang’ – a number which wastes no time in demonstrating the band’s uglier side. Across four minutes, the musicians repeatedly crank a slow and sludgy riff that barely changes from its first chord until its very last. This could appear tedious, but the laboured approach is balanced by a harsh hardcore vocal. A voice that almost seems black metal infused in the way it husks and screeches is an interesting counterpoint to the otherwise deep and swampy sound that seems set to break your speakers. …And if more observant listeners feel there are obvious parallels between Bible Basher’s brand of sludge and Kurokuma’s wanton heaviness, there’s a good reason: this brilliantly obtuse sledgehammer of sound is the work of that band’s Joe E. Allen – one of the UK’s finest riff-lords – based on an idea from Tich of Sheffield’s Temple of Coke.  They’ve teamed up with a member of Archelon to create the ultimate in doom. [A member of another band is also involved, but he deserves no further acknowledgement since his “other” band are horribly offensive – they regularly use the disability equivalent of the n-word and their Facebook page also displays regular disability hate speech. It’s not 1981 any more. They have no excuse for such an ignorant attitude. Real Gone has reviewed Bible Basher purely on our previous interests in Kurokuma and we wish it to be known that we hereby want no absolutely no association with that other band, any of its members, or the material they peddle elsewhere.]

Moving on, ‘Plagued’ takes a fuzz bass and rattling cymbals and places them against a buzzing sound, thus creating a really ominous atmosphere, before launching into a selection of flawless riffs that recycle the best elements of 80s thrash and boost them with a doom metal weightiness. With the arrival of a vocal – in this case, a fine and traditional death grunt – the band go for some genuine extremities. The bass and guitar sounds settle into something much doomier, and in terms of riffs, it’s almost perfect. The combination of thrash sounds, doom’s moodiness and – eventually – an almost circular grinding provides an entertaining crossover sound. That’s “crossover” meaning the crossing over of three relatively extreme metal subgenres as opposed to having any crossover potential for people outside of obsessive metal circles, of course. With such heaviness played with complete precision and delivered especially concisely, this is the EP’s most accessible number.

‘Burning & Blackened’ plays a little more for atmosphere at first, fading in so slowly you might think the band are taking the piss, but once the track finds its feet, sludge fans will be able to lose themselves in a riff that’s so slow that it almost sounds like the ultimate in doom. A growling voice places this much closer to Kurokuma’s usual fare, but that doesn’t make it any less interesting

than the other Bible Basher material – in fact, between the pure doom riff, a few sampled voices and a lead vocal that’s given a little more breathing space, there’s a lot to love here. By the time the throaty voice gives way to pained howls, Bible Basher reach their peak…and following an abrupt end, they move quickly into ‘Sodom & Gomorrah’, another track that doesn’t move far out of trad doom territory. Perhaps more than the previous offerings, the use of passages from the Book of Genesis actually lends a surprisingly natural metal-oriented lyric. The musicians seem (self-) aware of this, since the vocal performance is also a little more audible than the others. With a slow buzzing lead guitar break and an eventual swamp of noise topping an already insanely heavy riff, this is the essential cut. You want something approaching perfect sludge? Look no further.

Any longer, and this could have been accused of labouring a point, but by distilling a great, religion-baiting idea into just four tracks and under twenty minutes, ‘Loud Wailing’ is a great concept. With more than its share of great doom and sludge riffs to reinforce the found lyrics, as one of 2020’s heaviest releases there’s something here for doom devotees everywhere. …But be warned: you might only make it through one listen before extreme fatigue sets in!