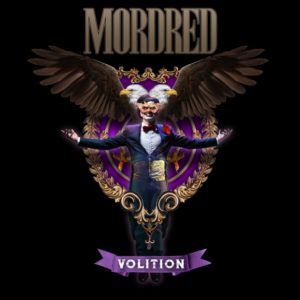 Finally, a full time return gave fans the ‘Volition’ EP in the summer of 2020. A four track release, three of its songs present Mordred at somewhere near full power. Two seconds into the opening track ‘Not For You’, the chugging riffs lock down a groove against a hefty drum sound and the Bay Area thrashers absolutely nail a sound that could be Anthrax circa ‘Stomp 442’. The scratching sounds kick in thereafter, lifting a very solid metal sound to new heights and it takes all of thirty seconds for Mordred to sound as if they’re not just back…but back and ready to wipe the floor with almost everyone. In terms of the song itself, everything about this is just spot on: the way the vocals lean towards a funk metal wordiness but never sound obtrusive lends extra interest, while the gang vocals on the main hook give fans something else that’s hugely familiar. Throw in a fantastic lead guitar break, a few electronic beeps and a couple of off-kilter grooves and this becomes an instant classic.

The intro of ‘Love of Money’ suggests more of the same, save for a slightly thinner drum sound, but moving into a slightly more spacious verse, an odd vocal really changes the tone. What transpires is an interesting hybrid sound where Scott Holderby’s performance is much looser, but within that, he taps into all manner of cries and croons that pull the listener in different directions. If you’re not used to Mordred – or perhaps haven’t listened in a while – this takes some adjustment, but the riffs are amazing throughout…tight enough and heavy enough alone to win over most fans from first listen. A re-recorded version of 2015’s ‘The Baroness’ gives the EP another welcome highlight. The original take caught the band’s mix of metal and funk well enough, but the final recording sounded a little thin. There’s no fear of that here: the guitars have been turned up to eleven, giving the riff the same kind of weight as heard on ‘Not For You’; Scott’s vocal has more gravitas and Pause Vaughan’s turntables sound more natural. You might think that with everything else turned up he’d be buried, but he retains a very strong presence throughout. For those who enjoyed the original version, this beefier rendition will be a favourite track for sure. It’s also a great entry point for any new listeners – a fine showcase for a funky metal band who aren’t actually falling into easy or dated funk metal tropes. In short, ‘The Baroness’ (mk II) is just over three minutes of Mordred at their most direct and should be heard by everyone.

Unfortunately, joining the three absolutely stellar metal-oriented workouts, things take a drastic left turn with ‘What Are We Coming To’, as the band present a full compliment of heavy beats and drum loops against an overly autotuned vocal. There are no guitar riffs and no absolutely concessions to old-school thrash. Instead, the socially charged messages are presented as if they’ve been lifted from an old Notorious B.I.G. LP and the vocal inspired by Wiz Khalifa or Future. It’s well done, (assuming you like that sort of thing, of course), but feels incredibly out of place here.

At its best, ‘Volition’ brings more metal excitement than most bands manage in an entire album. Looking at the opening track alone, it’s everything a Mordred fan could ever want. Its near perfection means you no longer have to dust off your much loved copies of ‘Fool’s Game’ and ‘In This Life’ and hope for something extra – it’s got the riffs, it’s got the hooks and it’s got the wicky-wicky in time honoured Mordred style and is nothing less than brilliant. Obviously, this EP’s best material doesn’t always showcase the band in a new and exciting, reinvented way; it wisely gives the fans exactly what they want, but is all the better for it. When Mordred deviate from that blueprint – as per the rap track – it’s a different matter entirely, but with two absolute bangers to be found among the four chosen cuts, fans should be more than happy with this comeback release.