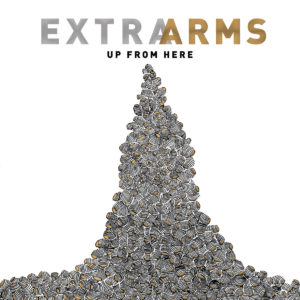 For those who love good, melodic punk, the subtle as bricks ‘F.L.Y.’ will be a favourite from first play. Allen makes no apologies for his bad mood, nor does he waste any time – or flowery syllables – in getting his point across. Barely before a note has been played, he tells everyone how he’s lost his wife and his house and been metaphorically “punched in the mouth”. Lyrically, it’s got bite (the repeated refrain of “fuck last year” is irresistible) and musically it’s an absolute corker. A tune absolutely loaded with muted chords, it revisits the great sounds of bands like Goldfinger (at their punkiest) and Fenix TX, making it a great starting point. ‘Secret Friend’ tackles the subject of affairs in a really accessible way and while it’s pretty much as punchy, the music takes a sidestep into an almost glammy power pop with hints of Cheap Trick and Ryan Roxie, Allen’s lead vocal is hugely appealing, but if anything leaves a lasting impression, it’s the guitar work throughout. From the opening trashy riff through to the glam metal solo, there’s not a note out of place. How could one man’s pain be so catchy? It’s a twisted world…

The Ramones/Dan Vapid-ish ‘Disruptor’ is a superb pop-punk banger, giving drummer Daniel Stover a solid workout which, combined with some great punk guitar sounds, blasts through a couple of minutes while Allen’s multi-tracked voice lends a great power pop edge. A brief shift from punk into something a little more metallic gives an extra layer Extra Arms – a superb demonstration of their range – while the dirty rock of ‘Comes In Waves’ offers a superb chorus against a grubby hybrid of Butch Walker, Replacements and Bowling For Soup influences. Although retaining a punk-ish punch, the various layers and brilliant production sound will certainly be enough to draw in the keener power pop fan.

A heavy bass drum and dual guitar sound pump the intro of ‘No Enemies’ before branching out to deliver a superb, guitar heavy piece of power pop augmented with a Cars-like synth. The way Allen’s vocal drops between the jagged verse chords takes influence from many cult power pop acts, but there’s always a feeling that he’s still ploughing his own take on the genre, especially in the way he’s able to take those sounds and really beef them up. Like ‘Comes In Waves’, a really simple hook proves to be incredibly catchy, making this a stand-out for long time fans and first time listeners alike. A wall of guitars thrash out some great indie rock during ‘Hold Me (All The Time), occasionally hinting at early Buffalo Tom and Superchunk influences. Once a massive power pop vocal bursts through, pretty quickly, this mix of trashy rock and power pop becomes another gold standard number, before ‘Space Jam’ throws out a world of howling lead guitars. Leading the charge into a very 90s slab of alt rock, Ryan seems a little more positive, singing of how he “was lost” but has “been found”. These allusions to feeling like he belongs, along with metaphors suggesting a lack of gravity and a “rocketship [that’s] been repaired” more than suggests a new relationship – or at the very least a change of heart. Very much by design, this reinforces the idea that these songs are best heard together as a song cycle moving through anger, realisation, disruption, sadness and, eventually, an ability to move on. In closing, the title track is a fine piece of bubblegum punk, loaded with harmonies and a world of jangly musical layers. “You can always turn shit into gold” Allen opines between mentions of a “ray of sunshine”, which might seem a little too simplistic a viewpoint in isolation, but it’s one that’s so well suited to his chosen arrangement which, with nods to Bowling For Soup, rattles along at a fair pace while always keeping a firm hand on a melody.

It might sound like pure hype, but this release – although short – is pretty much flawless. If this is to be Allen’s own ‘Blood On The Tracks’, then its been a great outlet for both his emotions and talent. There mightn’t be anything as saddening as Dylan’s ‘If You See Her, Say Hello’, but thankfully there’s none of the genuine spite of his ‘Idiot Wind’ either. The anger is a document of a man lashing out in a more general fashion, meaning that so much of the material could easily apply to anyone’s misfortunes – divorce proceedings or otherwise – while the gradual positivity picked up en route is a strong reminder of how lots of things can seem better in time. The fact that so much of his emotive energies come coupled with great tunes makes this release even stronger. If you’ve never heard Extra Arms before, this will be enough to win you over. It might have started as one man’s therapy, but you’ll be glad he chose to share his feelings with the world. Absolutely loaded with classic influences, ‘Up From Here’ is a great record.