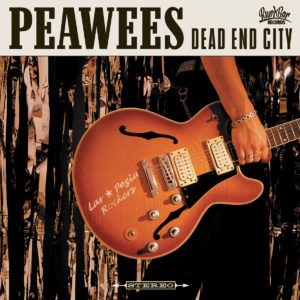 Any reissue at all is a very welcome one.’Dead End City’ is the kind of record that deserves a wide distribution, as its chock full of feel-good, riff heavy tunes that are as much about melody as speed. The opening track ‘The Road To Rock ‘N’ Roll’ sets their musical stall out very clearly, kicking off with their frontman Hervé stating that the band are back and deserve a standing ovation, before the tune throws itself headlong into some top draw, punchy punk ‘n’ roll that is an easy match for the early Rocket From The Crypt and sadly missed Thunderfucks. The verse is so tightly wound, you have to wonder if there’s anywhere further for the band to go, but between a gutsy rock ‘n’ roll guitar solo and chorus full of shouty gang vocals, it has all of the genre’s main concerns more than covered in a near-perfect three package. ‘You Don’t Know Me’ adds further to the band’s legacy with another three minute, guitar driven blaster that combines the more commercial feel of early 90s Social Distortion with the chorus thrills of Gaslight Anthem, all wrapped up in something that pays homage to ‘I Fought The Law’. The guitars are dirtier, but that doesn’t detract from a great melody and the old style mood cutting through every bar results in some fine rock.

In a slightly punkier mood, traces of Groovie Ghoulies meet Generation X at the start of the title cut before a chorus suggests something a bit closer to trashy bar-room rock, but the melding of two very strong styles results in a very confident sound. The lead guitar break is suitably dirty and the gravelly lead vocal really adds something to the relative rawness of the number, even though the production and mix on this album is fairly slick. Deeper into the punk ‘n’ roll aspect of their sound, The Peawees sound absolutely on fire throughout ‘No Reaction’, a tune that blends thrashing guitars with an unashamedly 60s lead guitar break. A few backing vocals join the kind of rhythm that’s suggests handclaps have leant a big boost both of which show the band’s constant desire to be more than just another Euro punk act, while the slightly more subtle ‘In The Heart Tonight’ shows off Hervé’s abilities as a vocalist on a multi-layered tune that occasionally tips its hat to Ramones’ more 60s influenced numbers. Including influence from The Clash and something that sounds like a punky Ritchie Valens in almost equal measure, this presents yet more punk ‘n’ roll gold.

After hearing those tracks, it should be already clear to all listeners that they’re in the presence of a more than solid disc…and the remainder does everything in its power to keep up the momentum. ‘Ready To Go’ demonstrates Peawees’ love of overdriven rock ‘n’ roll in its purest form, especially in the way the lead guitar fills spaces with various familiar retro sounds during the instrumental part. Not only is it one of the album’s real highlights – on an album full of highlights – but Hervé sounds like he’s enjoying every moment. Grabbing a firm hold on a great walking bassline, Lalo seems firmly in charge of ‘Boss Hoss’ with some really taut playing, over which Hervé and company really cut loose, but it still doesn’t quite have equal the fire of the very Rocket From The Crypt inspired ‘I Know Your End’, a track with some fabulous guitar playing throughout. Here, the overall trashy vibes are improved with some great backing vocals and overall it’s another fine listen. In terms of capturing the essence of the Peawees’ style in one brief hit, it’s all here. For those looking for punkier jollies, ‘I Don’t Give A Fuck’ goes all out in the attitude stakes, while still very much applying a few of The Peawees’ finely honed skills to lend a touch more sophistication. The sheer drive of the lead vocal is, perhaps, this number’s best trait but, at the heart of these two minutes, you’ll quickly discover another fat bassline that values toughness over complexity. Even more concerned with attitude, ‘Don’t Look’ almost feels like a throwback to the band’s formative years with a minute long thrasher that places guitarist Jacopo very much in the spotlight during the intro and coda sections, as he throws out something that sounds almost as if it were inspired by an old Motorhead banger. Somewhere between, the whole band thrash their way through an intensive thirty seconds as if the studio were on fire…and with no desire to repeat anything resembling a hook, they bow out almost as quickly as they began.

Among the Peawees’ excellent originals, a couple of very well known covers show off the band’s abilities to apply their own guts and speed approach to other peoples’ material. Perhaps this album’s weak link – all things considered – Dion’s ‘Runaround Sue’ gets a kick up the arse and comes across as reasonable fun despite some particularly raw backing vocals. It’s good, but doesn’t quite hit the heights of the rest of the record, but that’s more than made up for by the band tearing through Creedence Clearwater Revival‘s ‘Proud Mary’ at full pelt. John Fogerty’s best tunes not only have a near timeless appeal, but also benefit from an almost bulletproof edge – by cranking the speed here, The Peawees give more of the feel of a live performance, while a heavy Italian accent throughout – but especially obvious on the word “river” – just adds to the fun.

Without putting too fine a point on it, this is a fucking brilliant record and you want it. You might not know you want it, but you really do. It’s easily one of the best punk ‘n’ roll records to ever be released – up there with RFTC’s seminal ‘Scream, Dracula, Scream’ and The Living End’s debut. Get it now!