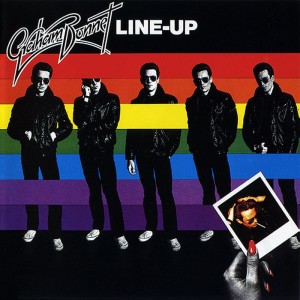 After departing Rainbow in 1980 after just one album and tour, Graham Bonnet found himself at a career high. Returning to solo work, the third LP released under his own name, 1981’s ‘Line-Up’ is a huge step forward from his two solo discs from the 1970s. To be fair, it couldn’t be any worse; 1978’s ‘No Bad Habits’, in particular, borders on being a terrible waste of plastic.

First off, as one of many pluses afforded to ‘Line-Up’, the sessions reunite Bonnet with ex-Rainbow drummer Cozy Powell, with whom he performed on Rainbow’s ‘Down To Earth‘ and while the lighter and sometimes more AOR direction of the material often dilutes Powell’s trademark heavy, thumping style, Bonnet, by comparison, sounds more comfortable than ever. It’s not just Powell who’s along for the ride, either; Bonnet has had enough clout to summon up a roll-call of impressive friends, each helping to make ‘Line-Up’ the best of his solo works.

The sparkle in most of the performances rarely comes across more than on the opening track and lead single ‘Night Games’. A number penned by Ed Hamilton (sometime of the Young & Moody Band), this tune is almost as friendly as the best works of Russ Ballard, with a strong focus on a chorus hook, some smart harmonies and even smarter and timelessly memorable melody. On this slightly pompy AOR nugget, Bonnet goes to work much in the same way as he had with Rainbow. Following an intro of stabbed keys that sound like they could drop into Rainbow’s ‘Makin’ Love’ at any given second, a pumping bass leads the way for a great melodic rock verse…and Bonnet’s in his element. His voice, natural but hugely tuneful, carrying all the power of his best Rainbow performances, while the chorus hints at far greater melodies. Meanwhile, an understated synth colours everything and Micky Moody – on loan from Whitesnake – fills space with some classy guitar leads, never stepping to the fore and allowing the vocal to carry the weight. A deserved UK hit at the time of release, ‘Night Games’ should have become a radio staple much in the same way as Rainbow’s ‘Since You’ve Been Gone’; it’s weathered the passing years exceptionally well, but it’s seldom heard. It almost makes ‘Line-up’ worth the price of admission alone.

Thankfully, the foray into AOR territory doesn’t stop there. The first of two Russ Ballard compositions, ‘S.O.S’. brings another great hook and superb contributions from all concerned. Obviously, Ballard was the golden boy at the turn of the decade; his ‘Since You’ve Been Gone’ had finally become a huge hit in the UK thanks to a cover by Rainbow with Bonnet at the helm (now a rock radio staple) and at the time of ‘Line-Up’s recording, Rainbow – sans Bonnet – would score another hit with Ballard’s ‘I Surrender’. So, then, it seemed only natural – and quite savvy – that a couple more of his songs would find their way to Bonnet’s recording sessions. ‘S.O.S’ doesn’t quite have the class of Ballard’s best known compositions, but it’s a track that deserves much wider recognition. On this number, Bonnet is joined by Moody, some twin synths, a punchy riff and some great gang vocals. The combination of stabbed keys and Moody’s dirty guitar fills makes for consistent entertainment, but Bonnet gives his all, curling his voice with some confidence. The repetition of the title in the name of a chorus might appear a little lazy, but the use of harmonies is superb and using those voices to occasionally replicate Morse code is unintentionally funny. Dropping the mood into something a little bluesy, ‘I’m A Lover’ really allows Bonnet to shine with a bigger performance (a la Rainbow’s ‘Love’s No Friend’) and, expected, he shows why he was one of the UK’s finest vocalists at this time. You’ve heard him in similar style before, but there’s no effort in his delivery. The contrast of ache in his lead voice and the smoothed out harmonies helps carry the piece with ease. This track is a neglected gem.

In a thowback to Bonnet’s early solo releases, ‘Line-Up’ then presents an obvious flaw. Tackling the Ronettes’ classic ‘Be My Baby’ in the manner of a work a day rock singer called in to croon for a TV advert, Bonnet threatens to sabotage his own work. Naturally, hearing his bellowing pipes imploring us to be his baby just doesn’t work. Strangely, though, it’s not Graham’s lead vocal that’s the biggest problem here, but the use of shrieking backing vocals and genuinely uninspired arrangement. A couple of clean toned guitars are passable, but the eventual arrival of a cheesy, honking saxophone makes this once questionable cover almost unlistenable. By the end of the three minutes, the memories of ‘No Bad Habits‘ come flooding, like the music fans’ equivalent of a Viet Nam flashback. Thankfully, as nasty as this is, by a minor miracle, it doesn’t spoil the rest of the LP irreparably. Closing the first side, ‘That’s The Way That It Is’ (written by The Moody Blues’ keyboard player Paul Bliss) comes across as a reasonable Survivor tribute with it’s simple combination of plodding rhythm, punchy bassline and big chorus. Musically simplistic it may be, but any shortfalls are made up for by yet another thoughtful harmony, and faced with such solid a melodic rock base, Bonnet comes up trumps, pushing his voice just a little for extra drama.

Kicking off side two, ‘Liar’, the album’s second single, is another stab at chart friendly rock. Whereas ‘Night Games’ got it so right by making best use of a shameless AOR chorus, this one gets is so, so wrong by hammering home the title repeatedly. Even so, Bonnet does his best, with his voice biting each line in a performance that’s the musical equivalent of a scenery chewer. Those vocals are the best thing here, pitching Bonnet as the consummate professional, as he battles against sheer bombast and some ugly keys that sound as if they were lifted from an eighties sci-fi theme tune. Man, this track is a chore to listen to if not in the mood…and yet it’s strange and unnerving manner is almost compelling. Above all else, it’s so hard to believe that this kitchen sink mess came from the pen of Russ Ballard! Unsurprisingly, ‘Liar’ did not score the follow up hit to ‘Night Games’ Bonnet hoped for. Another cover, Chuck Berry’s ‘Anthony Boy’ instantly comes across as sounding like Bonnet having a stab at something from Status Quo‘s ‘If You Can’t Stand The Heat’. It should be shit, but somehow, thanks to a bucketful of enthusiasm, a Pip Williams production style (though not actually the handiwork of Williams this time out) and the glaringly obvious presence of Mr. Richard Parfitt on rhythm guitar, it manages to be tremendous fun, following a slightly wobbly start. Honking eighties keys don’t really have a place on a Chuck Berry cover, but once Parfitt hits the groove and Bonnet rises to the occasion, the whole band fall in line and the end result captures what sounds like a really enjoyable session. It might not break any musical ground, or even have the lasting appeal of ‘Night Games’, but as a cover, it works more than well enough, standing head and shoulders above most of Bonnet’s prior attempts at putting his mark on pre-existing material.

Rivalling ‘Night Games’ as ‘Line-Up’s crowning glory and musical pinnacle, a pair of tunes written by Micky Moody with sometime Quo co-writer Bob Young provide superb entertainment. Both ‘Out on the Water’ and ‘Don’t Stand Out In The Open’ are completely sympathetic to Bonnet’s range and style. ‘Out on the Water’ allows Bonnet plenty of scope to reach full belt on a bar-room rocker that’s driven by a great no-nonsense riff, featuring Moody with an interestingly fuzzy tone. The band rock hard; Bonnet rises to the challenge, giving his all via a loud vocal, along with a couple of ad-libbed oohs that signify more fun. Quo man Andy Bown is on hand for some energetic, rollocking piano and Moody eventually sets the studio alight with a ripper of a slide guitar solo. Hearing this is much like hearing Bonnet tackle one of the early Whitesnake rockers – ‘Wine, Women An’ Song’, maybe, or perhaps even ‘Bloody Luxury’. For those who like the style, the results are thoroughly enjoyable. ‘Don’t Stand In The Open’ sounds like two songs bolted together; both elements are great, though don’t necessary suggest being of a piece. The verses have the air of 70s pop rock – a kind of hybrid of early Chris Rea and a more low-key Quo offering, perhaps even being inspired by the long forgotten Young & Moody LP on Magnet Records from ’77 – before a slightly bigger chorus has more of a Micky Moody feel; occasional hints of the early ‘Snake threaten the 70s radio sound, though never win out. Bonnet, meanwhile, sounds great, marking a welcome addition to an already enjoyable LP. Lastly, a third cover, The Kinks’ ‘Set Me Free’ updates the Ray Davies composition, taking it from 60s jangler to swirling, keyboard heavy, eighties flair. There are only a few suggestions that this is really that old Kinks track. The band totally run with it: it’s got the feel of an 80s TV theme with a rock singer belting over the top; much like ‘Liar’, the kitchen sink is in evidence, but while it doesn’t entirely work, it at least has the distinction of trying hard, of bravery and above all, of not being ‘Be My Baby’.

Despite being home to some very strong AOR-ish material, having had money spent on promo videos for singles and scoring a UK top ten hit single, ‘Line-Up’ limped to #62 on the UK album chart and was destined to be quickly forgotten by most. It’s not necessarily one that fans of Rainbow’s ‘Down To Earth’ will fully appreciate – it’s more about good times than grandeur – but as a melodic rock album taken on its own merits, it’s a terrific listen; as close to perfection as Graham Bonnet’s solo career was ever likely to get.

[A remastered and expanded reissue from Cherry Red Records, issued in March 2016, adds single edits of ‘Night Games’ and ‘Out on the Water’, alongside two non-album b-sides]