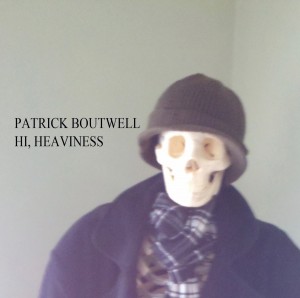 Singer-songwriter Patrick Boutwell is best known for being a member of alt-rock band The Brother Kite. For his 2016 solo release, he takes a side-step from some of the noisier and spikier aspects of his band work to increase the focus on some good, old-fashioned power pop, but without losing too much of the grit. Although the title ‘Hi, Heaviness’ may suggest an inward looking approach, the nine tracks on the album are largely concerned with a brighter outlook, helped no end by most of its tracks being awash with a clean toned guitar. Obviously, the power pop, Posies-esque influences should be enough for some of you to seek out this recording immediately, while for those already familiar with The Brother Kite, there are chunkier elements that provide a link with the past. He’s got both ends covered…and with ease.

The album starts in a slightly more subdued manner, though, with the compromisingly titled ‘Go Big and Go Home’ (possibly the first time we’ve been instructed to do both; no “or”), a stripped back track that features just Patrick and his guitar. The arrangement, chock full of ringing chords, is one that would certainly suit a Posies-like full band blow-out, but instead, the work is left to a multi-tracked harmony and shimmering electric guitar. Any edge has been smoothed out; although unaccompanied electric guitars can be hard on the ear, here there’s no such worry – it’s stark, but the production style ensures it’s friendly enough. It’s with the title cut where things fall into place and it’s quickly obvious that this release is essential listening. Over four minutes’ worth of full scale jangle, Boutwell teases with melodious key changes, an all round beefy sound and a guitar tone that’s just superb. There are big influences from Teenage Fanclub during their ‘Bandwagonesque’ phase, but it’s those combined with the performer’s alt-rock roots that brings this piece to life. Without losing too much of the melodic edge, there are between verse dalliances with noisy guitars that just lift everything to a whole new level, while the pay-off line is rather infectious. This has it all.

It doesn’t stop there. ‘Pressure Party’ brings more of the same, but with extra crashy guitar work and a genuine feeling of pace. As before, the vocal stylings are friendly and melodic, while the chorus rises to leave the listener with something genuinely catchy. Musically, it’s like the Delays reworked a Ben Deily penned Lemonheads tune. Although it wears some of its nineties influences proudly and boldly, it’s none the worse for that; the guitar sounds alone should provide just enough entertainment for the more discerning power pop geek. With a thicker sound, ‘Tongue Tied’ reverts to 90s styled indie rock, starting off a little like an old Sugar tune before dropping into a sparser, fuzzier verse. The alternative slant is perfectly counterbalanced by a poppy vocal, leaving behind a bouncy and thoroughly enjoyable number – potentially high on the nostalgia scale – while ‘The Big Sea’ could have come from the pen of Jon Auer back in the day. The multi-tracked guitars lend what could have been a standard jangler a much thicker tone all round, but it’s Boutwell’s slightly filtered vocal that stands out, often dominating everything and bringing forth a classic retro melody. ‘Scotch The Snake’, meanwhile, isn’t afraid to throw out some huge guitar chords for a great, full sounding rocker. A simple pounding drum sets the pace – almost with a metronome meticulousness – allowing Boutwell plenty of scope to chime his guitar over what’s essentially a near empty canvas. Another tune that owes a small debt to Sugar and The Posies, this noisier end of the power pop scale is clearly where he feels more at ease and should appeal to fans of either band.

‘Standing Waves’ has an interesting alt-rock sound, while still retaining many typical power pop rhythms and quirks. Boutwell dons the acoustic guitar and lays down a heavy strum, over which a meaty bass carries the weight of the melody. After placing his slightly wistful voice against this and taking everything into consideration, there’s more of a Folk Implosion mood and by the track reaches a climax with a distorted guitar solo, it becomes a very pleasing hybrid of Boutwell’s musical past and present. With the use of twelve string guitar, ‘Love Lies Waiting’ brings a perfect marriage of ringing guitar and deep bass. The vocal, too, is strong, ranging from friendly and understated into a huge cry for the chorus. The hook is an easily loveable one, designed to stick after just a couple of listens. If you were to imagine a jangly Boston band reworking something by the UK’s retro pop crew Delays (yes, them again), it might sound something like this. Closing this all too short affair, ‘I Lost You’ is a cast iron power pop classic. The vocals are enthusiastic and the incessant rhythm ensures the listener is more than carried along with the sound. Patrick’s voice retains a similar melodic friendliness as evidenced throughout the previous eight tracks, but it’s the guitar playing that impresses most: a crisp, ringing tone displays a huge fondness for Big Star and barely lets up from the get-go, and although the chorus hook manages to be the least important element to this track, all things combined leave us with something that Teenage Fanclub’s Norman Blake would be hard pressed to equal.

With sunshine pouring through (nearly) every crack of this recording – even the noisier moments have a sense of optimism about them – it really won’t be too long before you’re totally grabbed by ‘Hi, Heaviness’. The influences may be sometimes rather obvious, but that’s really not an issue since the song writing is very good throughout and, occasionally, Boutwell proves he’s an equal talent to some of the greats. With superb arrangements and a man at the helm who clearly knows what’s needed to lift the spirits, this is one of the essential discs of 2016…no question.