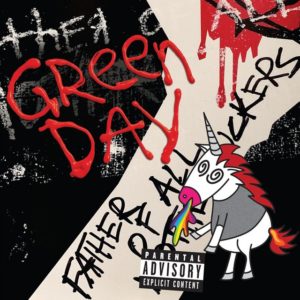 END_OF_DOCUMENT_TOKEN_TO_BE_REPLACED

These guys can be seen scattered across the internet, but it seems every time you find something, it’s often the same snippets of information and speculation. Take five people, put them in disguise and throw in a bunch of new wave tunes with pop-punk edges and it’s widely believed that you have a collaboration between Green Day and Devo. The first half of this theory is certainly correct: Fink sounds like Billie Joe Armstrong and close ups of his eyes blow away any doubt. The same goes for their drummer, The Snoo, who is unmistakably Tre Cool. Of most interest, though, is bassist/vocalist Van Gogh (Mike Dirnt). He handles a majority of the vocals on this release, with a delivery rooted in the new wave.

As for the second guitarist and keyboard player, it remains unclear who they might be. One thing’s almost certain – despite what you may have heard, they’re not members of Devo, even though Devo are an obvious influence on these songs. Although there’s still no concrete proof, I’d hazard more than a guess they’re old friends and Green Day touring band members Jason White (Billie Joe’s band mate in Pinhead Gunpowder) and Jason Freese. It’s also certain that this release exists as an outlet for Mike Dirnt’s vocal and songwriting talents as well as giving White and Freese greater creative roles.

Enough of the speculation and hype – what about the songs? There’s plenty here to enjoy. ‘Reto’ is spiky pop-punk in delivery, but the guitars are turned town giving it more of a new wave feel. The lyrics are biting, about someone who uses internet technology for exciting teenagers with cyber-sex; this may or may not be a true story (again, check your Green Day ‘American Idiot’ CD single – it’s engineered by someone called Reto – yet another clue?). ‘Right Hand-A-Rama’ also explores the smuttier side of The Network’s little world, being a song about buying porn and beer to pass the time. It’s rather more obvious who is involved on this song, with Billie Joe taking lead vocals.

Again, ‘Roshambo’ is more obviously a Green Day number, but treated vocals give this a fuzzy sound and the music between verses gives it a very mechanical feel, which seems to be a recurring approach. ‘Love and Money’ exploits the new wave side of things completely, being nearly all droning keys, coupled with a quite spiteful sounding vocal delivery. ‘Supermodel Robots’ was one of the earliest tracks available from this album, available at one point as a free download before the album was released, so I’m told. It’s obvious why. The vocals are unmistakably Billie Joe’s; less of an attempt has been made to disguise the Green Day input here, and this track was a favourite of mine from pretty much the fist time I heard the album (I have to say, though, most of the other songs took repeated listens before they took hold). One of the weaker offerings, ‘Spastic Society’ perversely offers one of the strongest musical arrangements, but is let down somewhat by seemingly stream-of-consciousness words on the verses, coupled with a fairly obvious ‘society is screwed’ chorus.  (Great tune, though their choice of words is an absolute travesty.)

Another album high point, ‘Joe Robot’ nods towards Devo’s ‘Whip It’ musically. It has lyrical concerns with changing technology asking whether these changes are helping us or hindering human progression. It’s almost certainly deliberate that one of the songs here most influenced by Devo has a lyrical concern that’s almost the anti-Devo. Also balancing out the fun and smutty offerings, ‘Spike’ is a piece based around telephone calls by a teenage heroin addict desperate to get money to get a fix. Like Devo, concerns of human wrongs are strong within The Network. Closing the original twelve track version of the album, ‘X-Ray Hamburger’ is slow and brooding, showing obvious homage to Tubeway Army.

The UK issue of this album features two bonus tracks, ‘Hammer Of The Gods’ and a quirky cover of The Misfits’ ‘Teenagers From Mars’. Neither of these add anything special to the overall feel or quality of the release, but from a fans perspective, it’s good to have them if you can track them down. As for the actual album itself, after a quick buzz, it seemed to go largely un-noticed here in the UK and full price copies of it sat gathering dust in the racks at HMV. If only Green Day would stop pretending they had nothing to do with it and start shouting about it a bit more, so many other people would have discovered this great album.