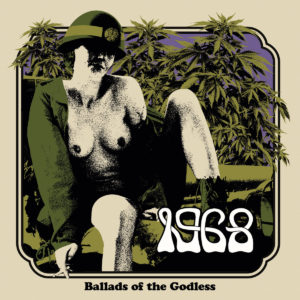 At the very beginning of 2016, a doom-blues/stoner trio crawled from the wilds of Cheshire and into the ears of an unsuspecting audience. Amping the blues much further than most had dared, their debut EP presented a cornucopia of heavy riffs; their music a fuzzy love letter to metal’s founding fathers. Almost twelve months later, that EP remained almost unsurpassed, marking a place among the year’s finest metal achievements. A year on, the band signed with Black Bow Records – home to Bast and Mammoth Weed Wizard Bastard – for a well received follow up.

2018’s ‘Ballads of The Godless’ – released through HeviSike Records is, well, heavy. Sometimes drainingly so. However, if you’ve already been acquainted with the 1968 sound, the album brings forth plenty of superb riffs; riffs which, when dressed in the band’s signature sludgy sound, have a timeless appeal. Timeless, of course, if you like Orange Goblin, Electric Wizard, Sloburn and Slomatics. As before, if you’re able to see through the heaviness, it also includes some fine, blues tinged sounds that – thanks to a very old-fashioned production style – are a welcome nod to a world of fuzzy analogue grooves in an all too digital age.