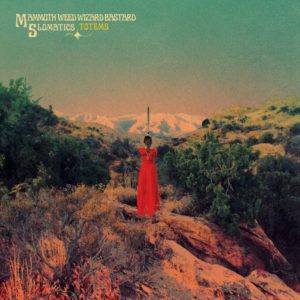 Welsh doomsters Mammoth Weed Wizard Bastard have been building a cult following since they unveiled a thirty minute track as their debut offering back in 2015. On the basis of their two contributions to this split release, they have absolutely no intent to lighten up or attract new listeners by mixing up their doom riffs with anything catchy. This time around, though, they have made a slight concession to something more digestible length-wise. That said, both tracks on this disc clock in at a lengthy ten and twelve minutes each, which is great if you love doom and are content with being swallowed head first by a weighty and treacly sound, but probably quite tedious if you came craving songs. That said, if you wanted songs and hooks, you’re unlikely to be even considering listening to MWWB.

‘The Master & His Emissary’ – the stronger of the two Weed tracks – is prime doom and could be the best thing the band has recorded. They take the twelve minutes and then use it thoughtfully, guiding the listener through a variety of moods – and for “moods” read “various insanely heavy pounding grooves”. Before the heaviness sets in, though, there’s a treat of dark electronica, as the band build tension by wielding an ominous keyboard loop that sounds like ‘Force Majeure’ era Tangerine Dream re-tooled by Hawkwind in a mighty strop. After a couple of minutes of this, one of the heaviest riffs ever crushes everything within a thirty mile radius, as if someone has slowed down an Electric Wizard LP to a crawl. MWWB know this is ridiculously heavy and so set about repeating what sounds like the same chord over and over until they’re sure their audience have reached breaking point. …And then, finally, at almost five minutes in, the fun really begins. The doom riff is replaced by a heavy riff that fuses doom and groove metal influences and Jess starts to sing. As before, the greatness comes from the band’s ability to place a clean and melodic – almost angelic – voice above one of the heaviest things ever. The vocal melodies are almost gothic, taking in fuzzy 90s goth influences as well as something that sounds inspired by Gregorian monks. It’s great…and bizarrely, the ethereal edge to the vocal almost makes it feel entirely detached from the riff, which – obviously – continues to plough ever forward, slow, slower, grinding merry hell as it goes. To finish, everyone opts for a slow groove that’s very close to The White Swan – arguably this band’s US counterpart – while a deep and almost blues-laden guitar solo tips the hat to the obligatory Sabbath and Orange Goblins of the world and the spacy keys drop in and out for maximum effect.

The ten minutes of ‘Eagduru’ really don’t offer much more respite, but if you’re a fan of MWWB, that’ll surely be a blessing. Although another fairly draining experience, it does offer a little variation on a theme by way of a fast intro and a main riff that serves up more of a buoyancy (relatively speaking). The band are also keener to immerse themselves within song-based materials here, too, ushering in Jess’s vocals as soon as possible. She’s a little lower in the mix, but this never diminishes her overall presence. The rest of the band, meanwhile, use their time wisely, experimenting with a few different ideas from deep tribal-infused drumming set against a riff downtuned to about three miles below sea-level and a rather threatening interlude that sounds like the overture to a public execution in a horror film (it makes sense when you hear it, honest). Although only a couple of minutes shorter than ‘Master’, it actually isn’t anywhere near as much of an endurance; this is possibly due to the fact you’ve adjusted to MWWB’s bonkers style by this point, but also the fact the vocal provides more of a melodic centre.

If you’re one of those troglodytes who thinks that female vocals have no place in metal, MWWB won’t do it for you, but Belfast sludgers Slomatics will provide an alternative with a bearded growler up front and with three equally heavy numbers.

At almost fifteen years into a career of heaviness at the time of this recording, Slomatics definitely have more experience with a riff, but with that experience comes a far less impulsive musical approach. That said, the drone aspects of ‘Ancient Architects’ have a great and really full blooded sound, helped no end by Chris Fielding’s production; the main riff recalls the kind of doomy and monolithic sounds practised by Kurokuma and Cult of Luna, while a secondary riff drops into a repetitious buzz-groove. While actually far less musical, the second part of the track is driven by some superb and almost mechanical drumming. At the point the riff is subjected to phased sounds and an occasional Electric Wizard-ish pseudo melody, this number has gone from merely good-but-predictable to potentially great, assuming you don’t mind a musical challenge and a vocal that sounds like a man bellowing into a void. Almost an interlude by doom metal traditions, the three minutes’ worth of ‘Silver Ships Into The Future’ changes the mood entirely with a haunting piano melody and gothic metal teasing, before ‘Masters Descent’ wastes absolutely no time in offering a very heavy and slow head-bobber of a riff. The amps are cranked to eleven (or possibly further), the riff threatens with a sludge like tendency and somewhere from within, a vocal wails with occasional words being audible. It’s like hearing an old Melvins demo reworked by Boris and Cathedral members and then dragged mercilessly across a rough eight minutes. Occasional shifts into something more drum-oriented and a closing section introducing a droning mellotron sound add some interest, but as before, there’s not too much that attempts to push the boundaries of doom. Still, Slomatics really achieve maximum heaviness and if you liked them before, this will be a great addition to your collection.

The best thing about this release – other than its relentless heaviness – is the fact that these newly written tracks neither sound rushed or like polished up leftovers. You can almost hear the mutual respect between each band coming from the wax. While the still relatively new Mammoth Weed Wizard Bastard are definitely the more appealing of the two acts featured, for doom lovers, ‘Totem’ has plenty to excite and feels like something more important than a mere stop-gap.