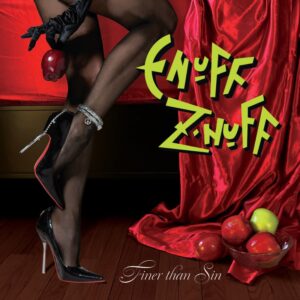 2022’s ‘Finer Than Sin’ is Chip’s fourth release in a little over three years (fifth if you include the three disc ‘Never Enuff’ anthology of leftovers), and much like the rest of the output from that batch, it’s a mix of good, bad and indifferent. Never classic – the days of a top tier tune like ‘Fly High Michelle’, ‘These Daze’ or ‘Baby Loves You’ are an ever fading memory – but it is the kind of record that serves up a few strong numbers for the more forgiving fan.

Opener ‘Soundcheck’ celebrates the band’s trashier aesthetic by working a chunky riff that takes the energy of Johnny Thunders & The Heartbreakers and mixes it with interludes that call back to the hazy 60s vibes of ‘Strength’. Despite the slightly sloppy lead guitar work from Tory Stoffgren and the fudgy production sound, there’s something here that’s easily recognisable as EZN, before ‘Catastrophe’ crashes in with a heavy 4/4 beat, phased vocals and soaring guitars. Even with Donnie Vie’s massive, curly voice long absent, this has the potential to be one of the best Enuff Z’Nuff tunes in many a year. Chip’s best attempts at singing convey plenty of the older magic as he works through a very Cheap Trick-like melody, and his bass work cuts through a semi-murky production with a reasonable amount of muscle, before Stoffgren overlays everything with a thoughtful, hazy guitar part. Granted, the chorus doesn’t have the same immediacy as, say, ‘New Thing’ or ‘There Goes My Heart’, but its heart is in the right place, and by the time the Roy Wood-esque descending scale is put in place during the climax, there’s a great familiarity that makes the track work.

Having set the mood, ‘Steal The Light’ presents some punchy power pop where Dan Hill’s drums punch through with a heavy beat, creating a solid groove. With that in place, Stoffgren seems happy to throw out clean, chopping chords, while Z’Nuff adopts a wavering and hazy vocal that takes plenty of cues from the band’s glory years. Although there’s a lot within the power pop/pseudo-psych pop blend that’s Z’Nuff by numbers, the fact that this is one of two numbers where it’d be easy to imagine Donnie Vie handling lead vocals automatically makes it better than a lot of the band’s later output. Similarly, the slow and Beatle-esque ‘Hurricane’ sounds like a direct descendent of ‘Innocence’ with its 60s keyboards evoking the sounds of the mellotron and Chip warbling in a particularly lax fashion. Obviously, it brings absolutely nothing new to the table, instead merely acting as a reminder of how much better this sort of thing sounded in the hands of the classic line up. That said, for a less discerning ear, it’ll still stand as one of this record’s most archetypal Z’nuff tunes, which is more than can be said for ‘Lost and Out of Control’, a speed driven rocker that aims to reawaken the knockabout fun of tunes like ‘Kitty’ and ‘Long Way To Go’, but falls rather short. It comes with a lot of energy and a punchy intent, resulting in a rocker that sounds like an homage to Ryan Roxie that would certainly be rousing as part of the band’s live set. As with a lot of this release, though, it sounds a bit lashed up from a half formed idea and suffers further from a lack of sympathetic mix.

Released as a digital single ahead of the album, ‘Intoxicated’ is very much EZ’N by numbers, with its mid tempo arrangement, 60s derived harmonies, layered arrangement and hazy feel. On paper, that would make it the ideal choice for an advance track, but it’s actually quite boring. There’s no real chorus to speak of (‘Intoxicated / It’s overrated’ is lazy, even by Chip’s worst standards) and the guitars never really do anything inspiring, meaning a second rate Beatles-ish plodder is left in the hands of an average vocal to make it work – and as previously stated by many, Z’Nuff’s best efforts in that department really don’t match Vie’s career bests. It actually sounds like a working demo for a track that’ll have a lot more bells and whistles added later…if only there had been more time and money. How this got chosen over the superior ‘Steal The Light’ to create that all important first impression is anyone’s guess.

If there’s anything else that’s obvious about ‘Finer Than Sin’ even right from first play, it’s that Chip doesn’t even have enough good material to sustain even a forty two minute, ten track release. During the second half of the record, there’s obvious filler: ‘Trampoline’ is a lumpen, glam fuelled number that sounds like a band trying to be Enuff Z’Nuff, smothered in vocal effects and hampered by a poor chorus hook; a cover of Sex Pistols’ ‘God Save The Queen’ is afforded a couple of more melodic guitar flourishes, but is otherwise played straight, resulting in something nobody needs to hear, and ‘Reprise’ is a reprise of ‘Soundcheck’ which already sort of played like filler anyway. The tail end of the album is only really rescued by ‘Temporarily Disconnected’, another decades old number that’s been recycled from EZ’N’s massive pile of 80s demos. The vintage quality is obvious since the core of the melody sounds like something from the band’s glory years, with an opening riff that wouldn’t be out of place on the first three records. Although, in some ways, the old demo with Donnie does all that’s required and this doesn’t especially improve on that, there are some great harmonic guitar sounds and, eventually, a really sparky pre-chorus and main hook reminds everyone that this band once served up the purest pop gold. In this re-recording and in Chip’s trademark 70s-meets-90s way, the tune rattles along gleefully, unconcerned with fashion, making the best of buoyant rhythms and a melody that pulls from Cheap Trick, Jeff Lynne and The Raspberries. If only the production job hadn’t been intent on smothering the pop with a fuzzy murk, it would be glorious.

Overall, this isn’t as good as the hit and miss ‘Brainwashed Generation’ or even Chip’s own ‘Perfectly Imperfect’, released just eight months previously. It’s a big step up from the tossed off collection of Beatles covers, but then, most things would be. Nevertheless, you’ll find four or five tracks that make the grade, and for the diehard fan, as usual that’ll be enough to lend continued support. Unfortunately, that won’t bring back the lapsed fan or draw in the halfway curious ear. If only Chip would think about quality rather than quantity: the best bits of this, coupled with the highlights the previous three records would’ve made a very strong album, rather than yet another patchy affair that only hints at how good Enuff Z’Nuff once were…and potentially still could be.