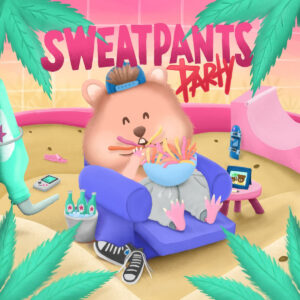 A new band for 2022, the terribly named Sweatpants Party marks a long overdue return for the almost legendary Kevin Aper. Marketed as sounding “just like The Apers”, fans are automatically given a heads up as to what they can expect, and indeed, the new band’s core sound recycles many elements of Kevin’s past works brilliantly. Although working from a solid pop punk stock, there’s a little more to the Sweatpants, though, since this musical vehicle – teaming Kev with members of Jagger Holly and Stockkampf – takes in bubblegum punk and a little power pop along the way. The focus is on unashamed pop punk and trashy lyrics, of course, and that’s enough to win over The Apers’ entire fan base in a heartbeat.

In and out in a little over a minute, ‘I.K.E.A’ mixes old Apers styled riffs with a cheerleader chant and a barrage of bad language to serve up a superbly trashy punker, setting the mood by throwing out a world of speed and crassness, but with the focus firmly on fun. As an opening statement, it tells you everything you need to know about this musical union between Kevin and his new friends in the most obvious way, before ‘Gimme Gimme Wok Treatment’ opts for something even more purist in terms of melodic Ramonescore. An instant classic, this punker models itself on at least a dozen Screeching Weasel tunes and blatantly steals an old Ramones hook, mangling it for everyone’s amusement. That means you won’t find anything new from Kevin, but between an amusing but really obvious hook and some tight playing, it serves up some classic punk. Keeping with the speed, ‘Weird Brain’ calls back to those early Apers tunes that were keen to recycle Screeching Weasel’s ‘Television City Dream’ era output with even more force, and here, the playing is superb and the huge guitar sound actually makes everything sound multi-layered in a way that a lot of pop punk doesn’t quite manage. With some great music in hand, it’s a shame that from a lyrical perspective it’s one of the album’s emptier offerings – the two words repeated ad nauseam are passed off for the chorus – but it’s a minor point. For those who spent most of the 90s sucking up a lot of material of a similar ilk, this’ll still be a favourite.

Relying on more really tried and tested sounds, ‘I Will Never Drink Again’ marries a repetitious hook and thrashy riff to create something that sounds like an old Apers number colliding with a couple of old Queers and Weasel classics – something made even more obvious via the use of a ringing lead guitar tossing out a simple, siren-like lead over parts of the main riff – and also presents a fabulously snotty vocal. The marriage of guitar and vocal is one of the album’s finest, and the dual vocal combined with a catchy hook is enough to see everything through with ease.‘Nibb-It Party’ delves even deeper into thrashy punk and fills a little under two minutes with one of the tightest riffs ever, but being smart, the band adds a brilliant cartoon inspired guitar riff and parping horn sounds in a few places to avoid everything descending too far into a relentlessly trashy mess, and the rollocking punk of ‘Luigi/Mario’ mixes more thrash punk and horns with the kind of puerile humour that made The Apers great. In terms of long term laughs, it doesn’t match the classics ‘Dear Ben’ (a lawsuit waiting to happen) and ‘Jamie Oliver’ (a brilliant ode to kitchen failure and a relationship doomed thereafter), but the refrain of “let me put my Luigi in your Mario” is certainly a novel twist on sexual euphemisms.

For those hankering after the more melodic elements of The Apers and Jagger Holly,‘Super Disappointed’ adopts a Dan Vapid-esque, mid tempo riff and applies a huge bounce, accentuating the bubblegum aspects of pop punk, before topping that with a harmonious gang vocal that aims – above all else – to hammer home a simple refrain. There are traces of early Kurt Baker material lurking beneath the punkiness too, but in the main, it’s the kind of track that mixes melody and punk in a way that would’ve made Johnny and Joey proud. To a lesser degree, ‘Happy Heart’ adds a melodic core to the punk via a deep guitar tone with a 50s twang and female harmonies. Sounding like an old Queers leftover, Kevin and company are within their comfort zone, but it’s great to hear more melody shining through a slower groove and the quirky extra vocals really make it stand out, regardless of the overfamiliar style.

Elsewhere, you’ll find some flat out punk on the swear-tastic ‘Fuckin’ Useless’, repetition aplenty on the Apers like ‘Elevator’, and some really buoyant punk on ‘Wasting No More Tears’ which adds a fierce bass rattle to a now solid Sweatpants Party blueprint. Each track helps to flesh out this release with a superb set of riffs and simple hooks, and if it hadn’t been clear before now, this band are probably the greatest thing to happen to Euro punk in a long while…

This is allegedly a full length album – and indeed, the twelve song format presents a full work in punk terms – but clocking in at barely twenty one minutes, it sells fans quite short on actual quantity. Nevertheless, it’s “all killer, no filler” (as Sum 41 once said) and between some insanely catchy, often expletive hooks, a world of whoahs and even more speed than ever, it’s a sure fire pop punk/Ramonescore winner that punk fans shouldn’t miss.