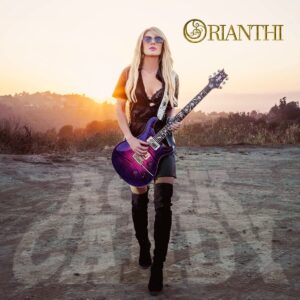 Orianthi’s 2020 album ‘O’ marked an overdue return for the Australian guitarist. Her first album in seven years and her first for the Frontiers Records label, it appeared during the pandemic lockdown, adding to an ever growing pile of welcome distractions for rock fans the world over. You’d be hard pressed to call it forward looking in any way – the bulk of the music ploughed a furrow where classic 80s melodic rock was very much at the forefront of her semi-bluesy sound, and the video for its second single ‘Impusive’ seemed to want to set the feminist movement back by decades – but, as melodic rock long players go, it was enjoyable enough.

A little harder around the edges, 2022’s ‘Rock Candy’ presents a selection of tunes that mix hard rock, blues, and occasional hints of pop in an often unchallenging way, seemingly designed as a quick and easy CV for Orianthi’s musical skills. Written and recorded in just twelve days, its best bits are enough to make it an interesting addition to her catalogue, and even a couple of weaker moments display a natural gift for a decent melody or two.

The opening ‘Illuminate (Part I)’ places a blanket of keys under a huge, bluesy lead guitar, weaving a melody that appears to be very much modelled on Gary Moore’s ‘Dunluce’. At the point it ends, it leaves the listener wanting so much more, and although it seems as if that wish will be granted at the other end of the disc, Orianthi has other ideas when ‘Illuminate (Part II)’ takes shape via some really mechanical sounding notes, clearly inspired by Jeff Beck’s terrifically inventive ‘You Had It Coming’. ‘…Part II’ is the kind of recording that very much advertises why this performer has been sought for session work, but also how she’s able to take various semi-mangled melodies and often make them very accessible.

Between those two bookends, Orianthi steers the listener through a variety of other rock-based moods, some of which are better than others, but for the lesser demanding ear, all are enjoyable – especially when played back at a high volume. ‘Light It Up’ supplies an early highlight on a three minute bluesy rocker that sounds like an arranged marriage between a glam rock band and Samantha Fish. It doesn’t take long before the stomping groove takes a hold, and a chorus full of gang vocals and massive whoahs wastes no time in attracting the listener in the most simple way. Despite her reputation as a guitarist – having played with the legendary Alice Cooper – it’s actually Orianthi’s voice that leaves the bigger impression here, and her huge tones carry a great melody throughout, adding a soulful edge to a full rock cry in a way that seems wholly natural.

‘Fire Together’ adds a pleasing and contemporary sense of melody to the album via a tune where muted guitar notes take the lead, interspersed by a light clanging sound, whilst Orianthi steers a pop/rock arrangement. Although staying within an AOR framework, there’s more than a slight influence from P!nk here, and even after hitting a heavier chorus and launching into a massive melodic metal lead guitar break, the poppier undercurrents never seem far away. Diving even further into a pop laden world, ‘Where Did Your Heart Go’ offers more clean notes and finger clicks set against a pop/R&B vocal, tapping into something that would’ve sounded chart worthy in the late 90s. This has such an effortless sound – especially when tempered with some blues guitar runs in the second verse – so it’s almost a shame that it was felt that a rockier chorus and instrumental break would be necessary. Nevertheless, the lead guitar sound that emerges during the second half of the track further displays O’s great tone. Even though this ends up sounding a little laboured in places, there’s no questioning the musical talents on display.

Completely switching gears, ‘Burning’ has obvious roots in tunes like Muse’s ‘Uprising’ and Goldfrapp’s ‘Ooh La La’ with its electro/glam rock fusionist stomping verse. As with a couple of the other standouts on this album, though, it doesn’t take long before other moods are thrown into the musical pot, and in this case, listeners will discover a strong chorus that sounds like P!nk with some hefty boots. That chorus doesn’t really compliment the verse, but between a strong melody and some great multi-layered vocals, it’s still good in its own right. A really energetic, metal lead guitar break, on the other hand, genuinely feels as if it’s been shoehorned in at the record company’s behest to pander to their core audience. This track sometimes sounds like a collection of ideas rather than a coherent piece, but if you’re able to latch onto one or two of the bigger riffs, there’s enjoyment to be had. At least it has a bit of imagination, which is more than can be said for the clumsily titled, almost nonsensical ‘Living Is Like Dying Without You’, a semi-acoustic ballad that seems to have been airlifted in from a country/pop album from the 90s. With very little of Orianthi’s guitar work in the spotlight, this could be anyone, and although only three minutes long, it has a light and semi-drippy feel that just seems to amble in too much of an easy listening manner.

Any disappointment dissipates once ‘Witches/The Devil’ hits with a heavy blues groove that favours a dirty sound set against a huge bass chug. The end sound marries the loudest elements of 70s rock with the more melodic parts of stoner rock, and with a vocal half buried under effects, it conveys a pleasingly sinister mood. Stopping abruptly once it hits two minutes, however, this sells a great idea short; there was definitely scope for expanding on this dark piece, even with many of its influences not being especially original. Also worth an ear, ‘Void’ adds something even heavier to this disc when a drum groove inspired by Zep’s take on ‘When The Levee Breaks’ drives forth a meaty, distorted guitar and vocal on a crashy chorus, and a heavy blues lead guitar break playfully mangles familiar tropes in a way that would surely please Stevie Salas. Strangely, there’s time enough here for a little pop too, and another mechanised rhythm fills a middle eight when a busy arrangement driven by flat bass beats and finger clicks – almost Billie Eilish style – provides an interesting detour.

At a little over thirty minutes, ‘Rock Candy’ is short. Even when viewed within a vinyl friendly landscape at a time when the fashion has returned to the forty minute format, it seems to come up a lot shorter than it probably should. Orianthi isn’t Van Halen; she doesn’t have the once youthful arrogance of Diamond Dave and EVH, and probably shouldn’t be passing off a 60s length LP as a full and complete work, but here it is. Nevertheless, between ‘Light It Up’, ‘Fire Together’ and the superb ‘Void’, it’s obvious that this is much more than a stop-gap, and its best bits are good enough to recommend spending half an hour discovering a few great tunes and enjoying a terrific guitar tone. For those who enjoyed 2020’s ‘O’ and are happy to embark on any of Orianthi’s chosen musical detours, there’ll be enough here to warrant an addition to your overflowing CD shelves.