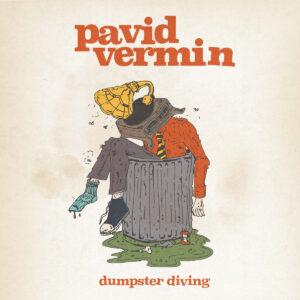 Despite the global pandemic side lining most bands’ plans, Pavid Vermin made the best of the downtime, recording and releasing some great DIY punk straight from Glenn Robinson’s home studio. The resulting ‘Cutting Corners’ LP was, aside from one nasty lyrical faux pas, one of the greatest pop punk releases ever, and its timely follow-up – ‘The Beach Boys Never Surfed’ EP – suggested they’d be more future greatness from this one man project.

By comparison, 2021 was far quieter, yielding just two new tracks issued as one half of a limited split EP with Phenotypes. However, Glenn made up for a less prolific output with the release of ‘Dumpster Diving’, a well curated dig through the archive which presents all manner of cool off-cuts. As far as leftovers go, most of these are still top drawer listens, bringing together various tracks that appeared as bonus tracks on limited edition vinyl LPs, compilations and other stuff. This disc actually plays well in its own right, with the self-penned ‘Outside World’ especially showcasing Robinson’s ear for punk and power pop melodies. The intro for the number comes straight from the classic era of Parasites circa ‘Punch Lines’ and that shimmering, cool slant on pop punk carries through to a really great chorus and melodic lead guitar break. Linking these elements, the tune is a little rougher, drawing from both the early 80s Ramones material and the rawer elements of retro power pop in an effortless way, whilst an accessible vocal teeters between a melodic charm and sem-gruff stance, calling back to some of Robinson’s earlier solo works. The demo recording is a little rough, but never so rough to spoil an otherwise great pop-punk experience. Much better soniicly, ‘Caffeine Nightmare’ was originally recorded for a planned EP of coffee themed tunes, and it’s great that this number wasn’t lost in the mists of time, as it could be one Vermin’s greatest sub two minute belters. In just 1:40, it serves up some sharp Ramonescore driven by buzzsaw guitars, always showing Robinson’s love of Screeching Weasel, but due to a great harmony vocal and a descending vocal melody put to great use, it manages to sound far greater than your average Ben Weasel lift. Factor in a crashy melodic hardcore breakdown and buzzing lead guitar break, and it’s nothing short of great punk.

Tapping into more of a power pop mood, ‘Half of Me’ blends punky guitar chops with beach friendly harmony vocals, a stabbed piano, and a vocal hook that’s an unashamed 60s throwback. Although the sound quality is a little woolly, it’s a fantastic showcase for Robinson as an arranger, putting a harmonic vocal through its paces – especially on an upbeat pre-chorus – and bringing in a bigger and more multi-layered sound for a superbly executed guitar solo. It’s the kind of number that deserves pride of place on any decent alternative playlist, whilst the punkier ‘Whoa Dude!’ latches onto a purer Ramonescore stance, whipping an energetic riff into a frenzy before Glenn pulls out an especially catchy round of whoas for a simple hook. You want great, melodic punk with an accessible power pop core? Look no further. This is every bit as good as the Pavid Vermin album tracks of the past…if not better. Returning to the caffeine theme, ‘Have A Cup of Coffee While The World Implodes’ was inspired by the relative safety of lockdown whilst the outside world ground to a halt. For those not interested in social commentary, it offers some great music by way of a distraction, and across this especially taut two minutes, Robinson drops into a superb Ramones derived riff, mixes that with a touch of old Lookout Records charm and even squeezes in an understated retro lead break, before bowing out with a slower, grander, melodic twist. In all, it’s a fine addition to his rapidly assembled body of work, and those who especially enjoyed the ‘…Never Surfed’ EP will certainly find a new favourite here.

Slowing down a touch, ‘Where Has Your Head Gone?’ ushers in some huge power pop chops from the late 70s with a chunky riff, subtle piano stabs and uses great, chiming guitar riffs as a hook. It wouldn’t be a huge leap to imagine an older act like Pezband or Shoes knocking out this kind of music with ease, but the sneering lyric reflecting on Brian Wilson’s state of mind and Mike Love’s general disregard for being friendly more than shows Robinson’s more distinctive hand. It’s unlikely to ever rise to the top tier of Vermin belters, but the guitar riff alone has enough charm to keep it afloat. ‘It’s Not You’, meanwhile, seems to be more of a casual throwback to the raucous punk/jangle pop hybrid sound perfected by the Lemonheads on their ‘Lick’ album in 1990, which coupled with an obvious Robinson derived vocal melody, results in two minutes’ worth of knockabout brilliance without challenging the Vermin blueprint too much. Rounding out the originals, an alternate version of ‘Throw Me In The Trash’ (subtitled “Trash Version”) is little more than a grubby punk demo, and yet within its sheer energy, there’s enough spirit to ensure it fits among these decent quality “regects”, and has enough of a punky pull to amuse an ever growing fan base.

Joining the Vermin originals, a handful of cover tunes more than add to the fun. Somewhat eclectic, these show Robinson’s carefree spirit, but also suggest a musical taste that’s broader than your average punk. Napalm Death’s ‘You Suffer’ is re-imagined as a four second pop punker with Glenn’s distinctive vocal out front and centre, and although he gets to do no more than sing the title, you get enough of a musical glimpse to suggest this had stemmed from the recording of the brilliant ‘Maxwell’s Silver Hammer’, a highlight from ‘Cutting Corners’ name checking Cannibal Corpse. At the other end of the scale, Dolly Parton’s ‘It Must Be You’ is redressed as a short and sharp punker that throws a focus on a great, fuzzy sounding vocal set against some sharp, rhythmic chords and musical stops. An occasional vocal affectation gives away its country roots, but country haters need not fear, as Pavid Vermin really make this their own. Elsewhere, Daniel Johnson’s ‘Psycho Nightmare’ is presented as a lo-fi punk ditty that casts Pavid Vermin more in the mould of a Euro punk band, all distortion and buzzing chaos with an occasional melodic vocal poking through; Kung Fu Monkeys’ ‘Summer School’ allows Pavid Vermin a little time on autopilot with a slice of Ramonescore 101 that sounds like something Ben Weasel might drop during a more carefree session, and ‘Shout Your Lungs Out’ (originally by cartoon band The Beets) pits a catchy as hell hook against a punk infused Devo riff with great effect. The highlight comes from a huge metal infused lead guitar break from guest Chris Chilton, absolutely melting his frets in a way that fits the original number’s spirit. The slightly new wave edge and screaming solos suggest that it’s a small sidestep from the usual Vermin fare, but the recording still retains a strong punky core with which extant fans should be able to identify.

Overall, this is a cool collection that holds its own against Pavid Vermin’s “proper” albums. Its main purpose is to make a few vinyl only tunes more accessible to buyers and fans of more convenient formats, but it seems far more than that. It celebrates the past, shows how prolific Glenn Robinson remains as a DIY composer and artist, sort of looks to the future, and still has enough of an all round completeness to appeal to the potential first time listener. Some of these leftovers are better than some pop punk bands’ finished albums. ‘Dumpster Diving’ is loaded with treats, but is definitely worth the small change for ‘Whoa Dude!’, ‘It Must Be You’ and ‘Have A Cup of Coffee’.
Being offered on a “pay what you want” basis, it’s technically available for free, so you’d be foolish not to grab it, but it would seem fair to throw a dollar or two into the Vermin kitty to keep the wheels greased for further musical adventures.