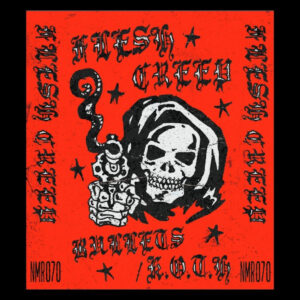 Hardcore punks Flesh Creep made their mark on the first quarter of 2022 with ‘Distributed Lethality’, a brilliant EP that delivered four pieces of unrelenting noise that mixed the classic anger of bands like Discharge, Government Issue and early Black Flag with the more contemporary sounds of UK bands Pizzatramp and Incisions. The fact that the release came packed with speed driven riffs and incendiary vocals would have been enough for it to make an impression, but the fact that Cult of The Fly Records were happy to release the material with a really unforgiving, heavily distorted production job gave the material even more of an edge.

Although still looking to classic influences, the pair of brutalist bangers that make up this limited cassette release present Flesh Creep with a cleaner, broader sound. It doesn’t make the band sound any more commercial – even in the slightest – since both tracks still work within some classic hardcore/D-Beat roots, but it’s great to actually hear their crushing hardcore riffs with a little more clarity. That’s especially true in the case of ‘King Of The Hill’ which captures everyone in a heavy, stomping mood in places, presenting a brilliant hardcore breakdown during a lengthy intro, before breaking into the speed driven riffs most listeners will be expecting. Whether chugging through a heavy groove that sounds like Sick of It All tackling one of their more forceful refrains circa ‘Built To Last’ or hammering through some speed oriented punk worthy of peak Poison Idea, the guitar riffs and relentless drum parts are always exceptionally tight, and this – perhaps more than any other Flesh Creep outing to date – supplies vocalist Tom with a much more interesting musical canvas.

Offering something a little more “traditional” at first, ‘Bullets’ packs a whole world of US influenced hardcore into a little over a ninety seconds. Following a spoken intro, the riffs explode into great punk that pulls the pure anger of UKHC’s Incisions and places that against a wall of guitars that could easily be drawn from many older hardcore recordings. What’s most important here is that, even with the reduced playing time, Flesh Creep don’t just settle for the easy thrash route. After a few bars of pure hardcore, they throw in a more jagged, melodic punk riff – the kind of thing that could instigate some good, old fashioned pogoing – before switching gears a third time to deliver the kind of breakdown that mixes hardcore punk with an almost sludge metal tone. Like a more modern take on a band like Earth Crisis, these few bars give a brilliant insight into how much of a sledgehammer sound Flesh Creep can summon when the mood necessitates. It’s brutal, but absolutely brilliant – a signifier of a band who are certainly more talented than your average punks, and a hint of great things to come.

Even though there are more musical moods present here than on any Flesh Creep recording to date, there’s still plenty here for pure hardcore fans to love. More impressively, despite presenting just the two tracks, the band’s keenness to mix things up and switch effortlessly between different hardcore moods actually gives the impression of there being more songs on offer, allowing this to play out like a full EP. If you’ve followed the band’s progress thus far, then you’ll certainly consider this a welcome addition to their growing catalogue, and for new ears, it’s likely to offer the kind of hardcore thrills that’ll make listeners want to seek out the recordings they’ve missed. Although ostensibly just a stop-gap release, this is a win-win for band and listeners alike.