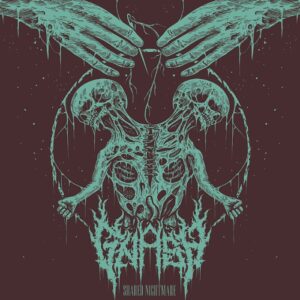 Newcomers to the sludge metal scene for 2022, Gnash make a brilliant noise on their debut release ‘Shared Nightmares’. Its four songs are devastatingly heavy, and right from the opening bars of ‘The Darker Half’, there’s a sense of absolute commitment to conveying weight via those riffs, since bassist Ethan Martin wields a tone that sounds like he’s playing back an old Melvins riff at half speed. Even when the guitars make a slightly later arrival, Gnash sound like a band wading through a musical swamp, and the layer of distortion that covers a massive doom riff only serves their purpose greater, and in less than a minute, they seem set to win over a whole raft of doom and sludge devotees even before this release is barely off the ground.

Things take a dramatic shift when Josh Richter starts to sing, however: instead of the expected deep growl, he casts forth a high pitched demonic yelp, more of a sub-black metal weirdness than trad doom. It either makes him sound utterly possessed, or as if acting the role of a petulant teenager, but whichever way you look at it, his choice of style is most unexpected. Nevertheless, given time to adjust, there’s a ferocity there that still suits Gnash’s angry noise, and as the number gains traction, his rasps contrast with the sledgehammer, funereal paced groove in a way that’s particularly striking. “They can’t deal with the way I feel”, he screams over a riff that makes early Sabbath seem half-arsed, before the whole band lurches forward into a slow groove that really shows off their almost ridiculously weighty tones. As opening numbers go, ‘The Darker Half’ is particularly uncompromising, but it still offers enough interest for most sludge fiends to plug onward, and sliding into ‘Broken Mirror Image’ things become more interesting whena piercing roar and feedback lead the charge into a slow, head nodder of a riff that takes cues from greats like Slomatics. Gnash continue to make this sludge a little more distinctive than most by throwing in a harsh lead guitar sound, which casts a siren like tone between the crushing doom, and applying an even harsher vocal throughout, they manage to create a musical landscape where the black metal of Bast and the pure doom of Byzantian Neckbeard become natural companions. As before, there’s no time for smart embellishments, no time for solos, and not even anything that could be called a hook – at least beyond another absolutely crushing riff. And yet, in barely three minutes, Gnash bring the kind of sludge that genre fans will absolutely love; even making the crossover elements of their noise seem like the most natural thing in the world.

The EP’s highlight, ‘The Amniotic Lake’ takes the heavy sludge and adds far more of a groove. Drummer Keenan MacNeil keeps things moving throughout with a hard, waltzing time signature, which makes it much easier for the bass to anchor an obvious groove whilst guitarist Nicky Richter continues to apply a sludgy tone throughout, even threatening to break into a solo, but never actually getting there. With elements of Sleep, early Cathedral and another dose of Slomatics styled goodness at the heart of some unrelenting riffs, there’s a world of stuff to enjoy here, despite Josh sounding as if he’s recorded himself retching into a plastic bucket. A few plays to get the measure of the heaviness only serves to make the performance sound even stronger/more scary, and a closer ear shows off Keenan’s drumming in the second half to have an incredible amount of oomph. In closing, ‘Sacrificial Bastard’ opts for a slow, bass-led groove, and its lengthier opening really shows how easily this heavy quartet gels, before reverting to a typically heavy, swampy sound where snare drums pierce through a wall of sound driven by a massively downtuned guitar. Although sounding like a small step backwards into predictable territory after ‘The Amniotic Lake’, these three and a half minutes arguably capture the band at not only their heaviest but in a way that makes the unrelenting noise seem like a more natural fit with the vocal. At a crossroads where sludge and black metal mantras meet, Gnash’s pure doom is set to take no prisoners. Even when nothing feels especially original, there’s a real density to the riffs that certainly comes through in a very pleasing way, and for fans of the style looking for another great sound from the underground, this could well become a favourite in fairly quick time.

These four tracks set up a sound that’s seriously weighty, but perhaps more importantly, Gnash aren’t afraid to make their point in a succinct way. In an age where so many sludge metal acts insist on pulling their riffs slowly and mercilessly over six or seven minutes at a time (sometimes longer), this band’s short and sharp approach is somewhat refreshing. By keeping everything around the three minute mark, the numbers arrive, make their dramatic impact, then split, leaving the listener in the wake of an obvious suckerpunch each time. Even at this early and somewhat raw stage, and even armed with a somewhat scary vocal presence, Gnash sound like a band determined to take sludge metal forward with an extreme confidence. For anyone halfway into a world of doom oriented noise, ‘Shared Nightmares’ is pretty much guaranteed to make an impression.