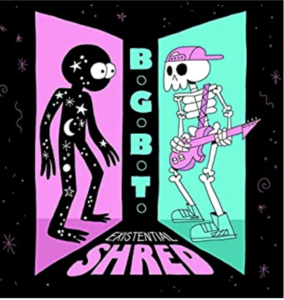 Having survived, presumably, the worst of a global pandemic, several degrees of lockdown and the arse end of the Trump presidency in an ever divided America, you might expect the band to be suitably miffed on the 2022 release, ‘Existential Shred’. However, in keeping with their abilities to stay one step ahead, they seem to be a little more optimistic. The upbeat nature of the EP’s material is probably as a reaction against a crumbling world, but it results in a surprisingly strong release.

‘Full Circle’ opens in an unsure way by contrasting a ringing guitar tone with a world of programmed beats, heavily treated vocals and r ‘n’ b rhythms, instantly wrong-footing the listener. Once the drums finally kick in, fans will recognise the band they’ve come to love, and the track blossoms into some perfect pop punk. As is often the case with BGBT, the focus is more on the pop than the punk, but the playing is very tight with a melody that New Found Glory would have loved at their peak. Eventually, a few buoyant riffs hint at huge breakdowns, but the commercial edge to the vocal and the tune itself ventures into a place that feels a little more emo. In terms of crossover, it’s very bold, but the band’s gift for taut harmonies and placing a strong jangling element within the light crunch wins out, leaving a strong first impression. Cranking the guitars a little more, ‘Season Ticket’ mixes a dirty chug with a cleaner emo-ish riff, and, in the band’s typical genre bending style, offsets that with a deep beat drawn from more of an r ‘n’ b school. Throwing some hefty “na na”s against the hybrid noise is a great move, since it’ll help to reel in anyone that might still be unsure, and there’s plenty of appeal in a guitar riff and tone that captures a late 90s mood, even a few of the riffs hint at a love of tech metal over the expected pop punk. Chorus wise, things level out rather nicely though, with a Sum 41 styled riff complimented by a soaring vocal that conveys talents that might just be far greater than the material actually requires.

More crossover goodness fills ‘Don’t Go Quietly’ with sharp guitar chords chiming against a hard bassline, before twisting through a riff with a couple of arty stops and settling on a riff that owes a lot to mid 90s emo and hardcore. The off-kilter time signature is seemingly never happy to settle, and a jagged vocal melody is brilliantly offset by a smooth-ish vocal delivery where male/female harmonies come together in a grand way, even at times when they’re smothered by a fierce lead guitar. It should be an absolute mess – and in a less talented band, it could well have been – but it all works brilliantly once you’ve tuned in your ears. There’s even time enough at the end for a few of BGBT’s beloved programmed beats, which further showcase a genuine desire to take pop punk into an inventive musical landscape where anything goes. Teasing with a hard rock chug before throwing a pop/emo melody ‘What Your Friends Think’ has elements that are more traditionally associated with pop punk – particularly a strong call and response element to the vocal and a crashy riff used to drive the chorus – but BGBT add plenty of their own ideas to keep things fresh. Here, a soulful lead vocal contrasts the heavier elements and a few dance oriented beats fill spaces unexpectedly, but by always dropping back to a strong twin lead guitar sound, a tune that could’ve been scattershot for the sake of it actually comes with one of the band’s strongest musical hooks to date.

It’s more than fair to suggest that this EP is quirky and musically varied, but it’s not as if BGBT are shy of delivering classic pop punk in a more traditional way, too. This EP’s highlight ‘Model Minority’ often sounds like a funkier twist on an old Sum 41 banger, making it a little more accessible for the first time listener. Taking a ‘Fat Lip’-esque riff and mixing that with a few deep basslines and an off-centre rhythm, the summer sound of the late 90s collides with something that occasionally sounds like a mangled Living Colour as chunky guitar riffs dance against pop hooks and a deep, funky bass. The chunky guitars are often in the driving seat, but there’s still plenty of space for harmony vocals to shine brightly, and more than ever before, a straighter arrangement allows for the interplay between the drum and bass to come through with a great clarity. Although there’s a lot about the track that plays very much like a more predictable pop punk/emo hybrid, the punch and enthusiasm within the performance is enough to suggest that, at the time of recording, this genre/style is far from dead.

Despite being more complex than all of their influences, these five songs are certainly more for the New Found Glory, A Day To Remember and classic Fall Out Boy fan than the Teen Idols or early Green Day devotee, since BGBT are often about the pop-ish melodies above all else. Occasionally, their love of applying a math rock complexity to a pop punk riff can seem a little messy, but when the right mood, ‘Existential Shred’s devotion to big hooks and melodic choruses will certainly push the right buttons. This is one of those EPs where you might well find yourself hoping there had been a little more once the last notes fade, but this easily their most focused collection of songs to date.