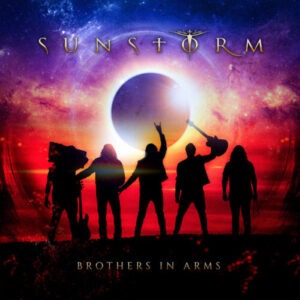 When the legendary vocalist Joe Lynn Turner stepped away from Sunstorm in 2020, it could have been the end of the line for the much loved melodic rock band. After all, his departure not only left them without their distinctive voice, it also led to a band with no original members. In addition, Joe was the reason why most people loved Sunstorm in the first place. For these reasons, for Sunstorm to continue seemed like a strange decision. However, they battled on, thinking that Sunstorm name would be enough alone to shift a few units.

After securing the talented but busy Ronnie Romero in 2021, the band secured not only another top drawer singer – capable of tackling a broad range of styles – but also someone who’d technically filled Joe’s shoes when Ritchie Blackmore decided to revive the Rainbow moniker. On paper, Ron was perfect for the Sunstorm job. Since they were attempting to replace the irreplaceable, the reality could have been different, but between some well written songs and Romero in great form, the new-look Sunstorm’s ‘Afterlife’ was a solid affair, regardless of whatever band name happened to be on the box. It was certainly good enough to suggest that Sunstorm had a future without Turner.

Their timely follow up, ‘Brothers In Arms’ (released in the northern hemisphere summer of ’22) gives fans more of the same, which seems nothing short of a miracle given that the personnel has changed yet again. This time around, they’ve lost their rather nifty guitarist Simone Mularoni and drummer Edoardo Sala, but those charged with taking on these integral roles fit Sunstorm’s current remit perfectly. As evidenced on this recording, guitarist Luca Priciotta (known for working with Doro and Blaze Bayley) appears capable of approaching various rock styles with relative ease, and drummer Michele Sanna often turns in solid rhythmic performances, despite never being required to do anything flashy. Most importantly, at least half of the songs on this album come loaded with massive choruses, which Romero approaches with a sheer delight.

The title track starts the album in a particularly grand fashion with a wall of keyboards that takes influence from Giuffria, before launching itself face first into a thunderous piece of melodic metal that fuses elements of ‘Odyssey’ era Yngwie Malmsteen with a hefty Euro AOR/melodic rock sound that would suit Khymera. Obviously, this gives the whole band a solid workout. There are plenty of moments where keys man Alessandro Del Vecchio (him again) is in the driving seat, whether tackling some busy fills or a retro lead break, but new boy Princiotta beefs up everything with some well played muted chords. The guitarist appears to be taking a back seat to begin with, but by the time his featured solo appears, he’s on fire. Presenting himself, peacock style, with several bars of deftly approached soaring notes, he takes the new look Sunstorm firmly into very energised territory. Now settled into his role as JLT’s replacement, it’s Romero who’s the star of this show, of course, and throughout this high octane workout, he finds a vocal space that’s tough yet melodic. The energy and force colliding with the more tuneful edge occasionally makes him sound like an accented Eric Martin with a cold, but in terms of power and presence, he hits everything head on.

More high octane rock fills drive ‘No Turning Back’, a tune with a massive drum sound courtesy of Michele Sanna, and an enthusiastic, vocal filled hook. Cut from yet more of the cheesy Euro hard rock mould than the AOR of early Sunstorm, it won’t necessarily please older fans, but there’s still plenty to love here. Del Vecchio’s keys provide a solid blanket over which Princiotta drops an effortless jagged guitar, and – as expected – Romero is in his element, chewing through lyrics about unity and destiny. The whole thing sounds like Sunstorm channelling Magnus Karlsson’s Free Fall, but for what it is, it sounds superb. Similarly punchy, ‘Lost In The Shadows of Love’ supplies a Euro metal banger where Del Vecchio gets to unleash his inner Don Airey, Sanna powers forth with some very busy tom work and Ron sounds like he’s auditioning as a replacement for Mark Boals with whatever virtuoso six stringer requires his talents next. It really isn’t Sunstorm, but it’s sort of great on its own terms, and is especially strong once Princiotti reduces the speed to introduce a heavier groove for a very powerful coda. In terms of studs ‘n’ leather cheese, you won’t find much better.

Those hoping for a more AOR themed Sunstorm shouldn’t feel short-changed here, though, as the album includes a few absolute belters in that department. ‘Games We Play’ offers the kind of musical backdrop that isn’t a million miles away from ‘Straight Between The Eyes’ era Rainbow in terms of pomp, but its marriage of huge bass sounds and big harmony vocals owes just as much to bands like Streets and Seventh Key, creating sounds that are both retro and confident. A harmonious chorus really shines brightly, and although that should be enough to be the number’s greatest asset, its actually Princiotta’s guitar work that leaves the strongest impression. He fills space between the vocal with some wonderful soaring sounds, but steering everything towards the inevitable climax, his lead work comes with a very stately sound. If moments of that track echoed classic Rainbow, it’s got nothing on ‘I’ll Keep Holding On’, which has a verse that might as well be ‘Stone Cold’. Despite the obvious influence, though, it’s still great, and Romero sounds very appealing when pushing his voice against the shamelessly 80s backdrop, while the rhythm section hold down a tight but simple groove. As before, an already strong number is elevated by some tasteful lead work, and in terms of hooks – both lyrical and musical – this is the 2022 Sunstorm at their absolute best.

‘Taste of Heaven’, meanwhile, latches on to fine, punchy melodic rock where a mid tempo groove calls back to mid 80s vintage sounds akin to Foreigner and Fortune, allowing Princiotta to wield a pleasingly broad sound, using vibrato-fuelled notes to cover retro organ and hard snare beats. Musically, it’s very much AOR by numbers, though none the worse for that, especially with Ron in good voice and some well placed backing vocals on hand to give everything a lift. At the tail end of the track, a brilliant twin lead guitar sound bookends another smart solo, and a final airing of a strong chorus cements Sunstorm’s place as a confident rock band whose retro heart still beats proudly. By contrast, ‘Miracle’ doesn’t seem quite as immediate at first due to a bombastic intro with Del Vecchio and Princiotta induging in a shameless call and response, but once you get past that, there’s plenty to recommend it in the melodic hard rock stakes. Another largely mid tempo arrangement lends itself brilliantly to more (very 80s) grooves, and armed with something that occasionally sounds like a Shadow King leftover, there’s ample opportunity for Sunstorm to show off a strong vocal and even stronger lead guitar break. Naturally, it adds nothing new to their catalogue, but a couple of listens will be enough for it to become a fan favourite.

‘Living Out The Fear’ picks up the tempo again, and casts Sunstorm very much in the mould of ‘Vigilante’ era Magnum on a punchy verse that makes great use of chopping guitar. Princiotta occasionally sounds as if he’s actually going to slide into the riff from ‘Vigilante’ itself, but given the natural sound here, that’s certainly not a complaint. With everything rising towards a big chorus where Romero delivers a huge performance with ease, it has all the makings of being one of the best post-Turner Sunstorm tunes to date. Supplying something a little different yet again, the semi-acoustic ‘Back In My Dreams’ presents a beautifully clean guitar sound against an emotive vocal, in a way that conjures the purest in European AOR sounds. As you might expect, Romero is a natural fit for the style, opening with an emotive cry, but he holds back just enough to ensure that he’s got more to give when a louder chorus presents itself. The smoother and slower arrangement allows for some occasional blues-tinged lead work from Princiotta too, accentuating the more sophisticated side of this particular Sunstorm, and his featured solo is absolutely stellar. It’s easy to forgive the melody occasionally slipping into something not a million miles away from Malmsteen’s ‘Dreaming (Tell Me)’, since – of all the material here – this track truly sounds as if it were written with the legendary Joe Lynn Turner in mind, and somehow got sidelined earlier in Sunstorm’s journey. That’s not actually the case, but there’s definitely an older heart to this number that would’ve suited Joe very well.

Throughout this album’s eleven songs, Romero conveys his usual combination of enthusiasm and professionalism, and new lad Princiotta supplies a decent amount of power in the riff department. Between them, this line up of Sunstorm has a strong musical core. Sure, the record won’t change the world and isn’t in the same league as Sunstorm at their Turner-helmed finest, but in terms of melodic rock and metal drawn from a traditional palette, it’s more than solid. It’s certainly strong enough for half of Sunstorm’s fanbase to glean enjoyment, and for Romero’s keener fans to love it almost immediately. The perfection of their ‘Eternal Fire’ albun seems a little further away, unfortunately, but those able to accept ‘Brothers In Arms’ on its own merits will discover a melodic rock record that has a timeless heart and broad appeal.