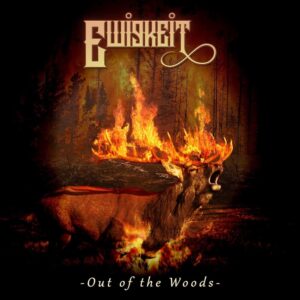 To move forwards, sometimes you have to go backwards. That’s certainly the case with Ewigkeit and their 2022 EP ‘Out of The Woods’. This follow up to the band’s excellent – and intense – pandemic inspired EP ‘Depopulate’ features three tracks that were written for James Fogarty’s former band In The Woods at some point prior to 2019. However, circumstances led to the band splitting, and James decided it wouldn’t be wise to let some potentially strong material go to waste.

The opening number ‘The Wolf Returns’ has a slightly muddy sound since it is sourced from a demo recording, but it’s perfectly clear enough to hear everything, and fully understand Fogarty’s musical intents. Beginning with a mid paced chug, the music takes on a solid approach somewhere between melodic doom and Alice In Chains at their most sludgy. A deep multi-tracked vocal is clean, but has a darker tone that some might also find has more obvious likenesses to Alice In Chains and the heaviest moments of Godsmack. It isn’t necessarily very original, but it shows Fogarty’s easy gift for heavy melodies and timeless sounds. Moving through a doomier instrumental break, the heavier aspects are increased, but between the deep six stringed chug and heavy toms, Ewigkeit latch onto some great stoner vibes, and when thi passage returns for an extended coda, the way it settles into a classic Sabbath-meets-Down sound comes close to presenting the finest riffs the band have recorded to date. Those looking for an obvious chorus hook might feel short changed at first since this really is all about showcasing some superb riffs and moods first and foremost, but a few plays will unveil a grungy piece of metal that has all the hallmarks of a genre classic.

Kicking off with twin lead guitars teasing with a blues doom riff that’s laden with echo, ‘Evergreen’ quickly shares a space with the more melodic aspects of Cathedral and Goatsnake, before ushering in an even heavier sound. As the verse slowly unfolds, a sludgy guitar set against a flat sounding drum part creates a very tense stoner metal sound, and Fogerty continues to wield that opening riff for extra atmosphere. It’s great, but a really measured vocal makes it even greater. For the verse, a clean doom-croon takes centre stage, but with a couple of phrases introducing a black metal rasp, it suggests things will get even more intense. And they do: for a middle eight, James looks to his extreme metal past and pulls out a fierce black metal shriek that’s sure to send anyone averse to such styles packing, before dropping back into the main riff via a great, dark instrumental section. In terms of a blackened doom sound, Ewigkeit might have peaked here – almost everything is perfect. Rounding out the release, ‘Namestealer’ is more marginal since its dominated by a strange rasp and chorale vocals that sound like the doom metal equivalent of a Gregorian chant, but musically everything remains brilliant. Looking purely at the music here, James continues to show how he is a master of a downtuned chug and minor key twin lead, using those aspects to serve up some top class gothic/doom metal along the way. It all feels a little more Paradise Lost than classic Sabbath or Candlemass, but there’s still much to love.

Obviously, Fogarty could have forged ahead with brand new ideas for Ewigkeit, but fans will be glad he decided not to let these older songs die since, in the main, they represent some superb metal. With a solid blend of stoner, classic doom and grunge, helmed by an often accessible vocal, this release proves that a massive heaviness can still be user-friendly, and that classic genre tropes needn’t rely on tired recycling. Recommended.