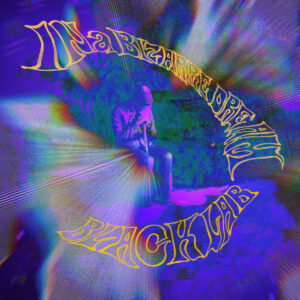 With its intense blend of doom and fuzzy garage punk noise, 2022’s ‘In A Bizarre Dream’ sounds like the natural follow up to ‘Abyss’, but thanks to a bigger sound that reinstates more of the bottom end – as heard on the debut – does a much smarter job. In lots of ways, it plays like the ultimate Blacklab statement, pulling the best elements from the first two records and delivering them with a bigger confidence. It isn’t an easy listen.

For those looking for pure doom, ‘Monochrome Dream’ takes a Melvins-esque riff, slows it down, and adds a layer of fuzz and extra distortion for good measure, setting up the kind of monolithic riff that lovers of the style will love in an instant. The recording is so pure; it’s absolutely loaded with the kind of lo-fi goodness that’ll make you think your speakers are broken, which is enough to make it an instant genre classic. That’s lucky, since any slight melodies it pretends to possess are offset by a really tuneless Japanese accented wail, which in some ways makes the track hard going. In some ways, it could be seen as a metal infused performance art. Whichever way you approach it, though, it’s far more intense than anything on ‘…Strawberry Moons’. Eventually cranking the gears for a faster riff that sounds like a heavily distorted Sabbath rattling their way through ‘Fairies Wear Boots’, Blacklab show off their previously obvious musical credentials, and make a once difficult tune seem surprisingly well balanced.

Also from the top tier of Blacklab sounds, ‘Abyss Woods’ quickly latches on to a massively heavy riff, falling somewhere between Crowbar, 20 Watt Tombstone and some generic groove metal, setting up one of the duo’s best tunes to date. Over the distorted noise, the vocals switch between a forceful cry and black metal growls, ensuring that anyone who’s easily swayed by a massive riff might think twice about Blacklab being an easy proposition. As the track progresses, a few moments of garage rock-ish distortion supply extra interest, and a discordant lead guitar break takes something vaguely bluesy and mangles it to sound like a selection of experimental electronic treatments, before everything bows out via a riff that continues to make most sludge bands seem non-committal. Adopting a similarly heavy sound, ‘Cold Rain’ wields a selection of slow and doom-laden riffs and couples them with a vocal that utilises angry screams and guttural roars in a way that takes influence from more of a funeral doom influence. There’s often an intensive heaviness, but that is partly counterbalanced by a dual vocal on the chorus where clean tones display an obviously Japanese influence. Although, again, the sheer weight of the sound can be hard going, it’s great to hear a band who seem unafraid to give some fairly generic doom more of their own character – which, if not entirely unique, is certainly distinctive.

In terms of sheer essentials, ‘Crows, Sparrows & Cats’ that outshines almost everything else on this record. A shift towards mechanical rhythms played on real drums set against a wall of fuzz hints at an interesting blend of garage rock, fuzzy metal and industrial tropes, and in doing so, presents Blacklab in a much sharper way. Making things even better, the microphone is handed over to Stereolab chanteuse Laetitia Sadier who supplies a very distinctive and slightly flat vocal which sounds almost detached from the music itself. A couple of verses in, and the repetitious groove really starts to take a hold, and then, with the addition of a few bells and a heavy beat that sounds as if things will drop into an old White Stripes number, everything shifts into a much heavier doom riff. Although that means it moves into something closer to typical Blacklab, the marriage of extreme heaviness and Sadier’s voice – a sort of dour Nico-ish drawl tempered by French Ye-Ye clarity – is always interesting.

Elsewhere, the music takes a few detours into other genres, which proves to a be a necessary – and smart – move to avoid fatigue setting in. Musical experiments with ambient drones (the title track) and dark, gothic rock (‘Evil 2’, following on from a generic doomer ‘Evil 1’) present Blacklab’s darker desires in a more palatable way but never really stretch beyond anything predictable. At best, a few of the cleaner tones throughout ‘Evil 2’ suggest a band capable of turning into Fields of The Nephilim on a budget. However, during ‘Lost’, the band’s signature fuzz is given some unexpected speed and Blacklab show how well they can handle something that falls squarely between arty, distorted noise and garage punk, hammering out riffs by the dozen – and at three times their usual speed – whilst an angry vocal spits sharp syllables, never caring whether any lyrics are audible. In terms of energy alone, it’s a winner, but taking the sheer force of the sound into consideration, it cements Blacklab’s place as one of the noisiest duos on the planet.

With the album rounded out by more tightly wound noise, fans really aren’t sold short on this third outing. ‘Collapse’ fills more than enough time when embarking on a workout where sludgy riffs are augmented by clattering drums, before dropping into an angry punk/sludge hybrid that takes the guts of ‘Lost’ and drags them across six unrelenting minutes, and ‘Dark Clouds’, again, flaunts the speedier heart of this noise-making duo. For those who eventually take a shine to ‘Lost’, this is likely to become a favourite, with vocals that shift between brattish yelps, hardcore growls and an almost black metal rasp.

Across a handful of riff-heavy workouts, Blacklab not only revisit all of their best sounds here, but also reinvent their devastating heaviness at various points along the way. ‘In A Bizarre Dream’ isn’t as much a brilliant addition to their catalogue as a fucking scary one. Superlatives like “intense” and “uncompromising” don’t even scratch the surface, but if there’s one thing for certain, if you’re the kind of person who thinks that the doom and sludge metal subgenres tend to be predictable, this is one listen that’s not to be missed. Whether you actually like it or not is immaterial.