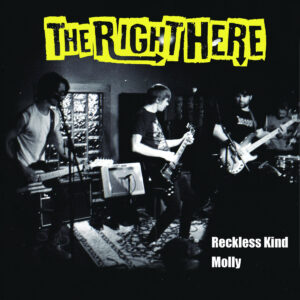 They aren’t especially well known in the UK, but The Right Here have been releasing enjoyable rootsy rock records since 2012. Capturing a sound that falls somewhere between Springsteen, The Gaslight Anthem and Nato Coles, the blue collar grubbiness within their work is laid on pretty thickly, but their gifts for knocking out riffs and hugely broad melodies makes their work widely appealing.

Their 2021 release ‘Northern Town’ was picked up for distribution by Rum Bar Records, placing the band in great company alongside Nato Coles, Watts and Nat Freedberg, A well rounded record, it placed the Soul Asylum-esque ‘Buy Me Another Round’ and ‘Every Once In A While’ alongside the punkier ‘Good Luck Trying’ and the countryfied ‘Drinks & A Dress’, giving the album a varied yet consistent heart.

This quickly released follow up from I-94 Recordings supplies an almost perfect companion, delivering a high octane original and The Right Here’s own take on a cult hit from the 90s. The self-penned ‘Reckless Kind’ taps into the band’s punkier side once again, unleashing a barrage of riffs set against an aggressive drum line that hits from straight out of the gate. Pretty much immediately, the influences from early Gaslight Anthem are apparent, along with traces of Grant Hart, but as before, The Right Here’s own character still shines brightly. Throughout the number, the lead vocals are as edgy as the riffs, and when it comes to a chorus, a simple shout along hook compliments the energy fuelled music that’s been set in place. Luke Lecheler ups the ante by injecting a brilliant lead guitar break of the pure punk ‘n’ roll variety, and if that weren’t enough, a coda loaded with gang vocals dropping aggressive “whoahs” takes this punk ‘n’ roll banger home, somewhat effortlessly. In some ways, this is the natural successor to ‘Good Luck Trying’, but in other ways, its sheer energy takes the band somewhere even more urgent than before.

That great track is complimented by a cover of Sponge’s ‘Molly (Sixteen Candles Down The Drain)’, an old US MTV favourite from the mid 90s. The Right Here don’t necessarily do too much with the arrangement, but a different vocal and more of a DIY sound are all that’s really needed to make it their own. For those paying closer attention, there are a few moments where the band’s rootsier heart comes through – particularly through the ringing guitar lead on the chorus – but it’s faithful enough to the original not to cause controversy or upset. A few wobbly backing vocals make it a little more marginal in terms of all round appeal, but there’s still much to love about The Right Here’s ragged charm, and the love they have for this old track is more than obvious.

Whether you’re approaching this release as a long time fan or as someone who didn’t really know The Right Here before, you’ll find a pair of tracks that often bring out the very best in the band’s no-frills, rootsy and retro sound. The recordings aren’t perfect, but in so many ways, that just makes them better. Playing like the ultimate 90s nostalgia trip whilst managing to cling onto a contemporary feel at the time of release, this is recommended to lovers of high octane jangle everywhere.