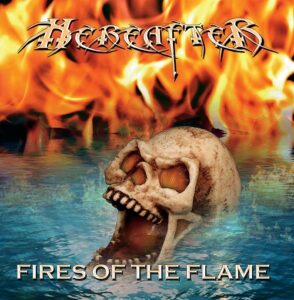 Formed during the global pandemic, US metal band Hereafter is a side project for two members of Corners of Sanctuary. As with all good side projects, it marks something of a shift for the musicians involved. Despite still sticking within the metal realm, this project trades in Corners of Sanctuary’s high octane, traditional 80s sound for something slower, groove laden, and almost doomy in places.

The four piece band teams Corners’ Mick Michaels and Mad T (guitars and drums, respectively) with ex-Blood Feast vocalist Chris Natalini and Burned In Effigy bassist Robert Bigler to create a heavy sound that values a steady riff above all else. To ensure an even bigger shift from the members’ day jobs, the songs even employ a very stylised vocal to accentuate a lot of the music’s very rhythmic heart.

It’s one of those releases where the listener gets a strong feeling for what’s in store right from the off, when ‘Different Kind of Something’ opens with a basic doomy riff, where semi-bluesy guitars collide with a deep bass and live sounding drums on an intro that has a big presence. The verse works the riff harder against a gravelly vocal that almost appears spoken, as Hereafter whip up something that sounds like a cross between a low budget metal band from the 90s and one of Tommy Stewart’s many, many musical vehicles, but without the invention. Despite the very basic approach, it’s clear the simple, direct riff has something, and the way the title is repeated as a hook definitely rivals the guitar riffs in terms of memorability. If it feels as if Hereafter are merely warming up, though, and those suspicions are confirmed with the arrival of ‘I Can Feel The Power’, a number that ostensibly brings a little more to their moderately heavy approach. With a slightly busier riff adding some extra chug, it’s easy to hear Hereafter’s musical intents gaining traction as they recycle traces of White Zombie’s ‘Make Them Die Slowly’ era material as a core influence. It’s presented with a much bigger budget and sharper quality, but still sounds pleasingly DIY, which says more about Zombie’s rawness and woeful budget than Hereafter’s sheen, but the marriage of cyclical riffing and heavy bottom end makes the overall sound hold up quite easily. As before, the vocals are very much a weak link. Although it’s always possible to hear the intent within Natalini’s chosen style, the flat way in which he delivers his lyrics has little appeal, and if he were merely aiming for an “extra instrumentation” approach, that also misses the mark a little through an over reliance of a monotonous gruffness.

The title track presents a huge step forward in terms of riffs, since Hereafter pepper their set in stone sense of groove with some louder, busier guitar work during the intro, and even take the time to fill the chorus with a ringing sound that comes a little closer to Corners of Sanctuary’s own work. The extra layers of guitar lend the number a vital lift, and even Natalini’s vocals upscale to suit the job in hand. He still favours something close to a left of centre spoken growl, but with a bit more enthusiasm and reverb applied, it works much better. By the time the chorus emerges with those ringing guitars, Hereafter’s DIY metal really finds its feet with a few double bass drums and a harder bass sound used effectively to bolster everything, and with a short lead break along the way, this definitely feels so much more complete. Released as a digital single ahead of the EP, ‘Devil By Your Side’ isn’t shy in flaunting those White Zombie influences, to the point where the riff reworks ‘Black Sunshine’ so heavily you’d expect it to come with an Iggy Pop voiceover. With a solid core riff, Natalini turns in another performance that’s a little better than before, with an almost punkish sneer, but in many ways, the vocals are the least important feature. With an unshakable groove delivered in the most solid way across a succinct two and a half minutes, the riff becomes everything – and if that’s how you remember Hereafter after everything is over, then its work is done. This certainly isn’t music for the head, or to be over-analysed in any way; Hereafter set out to bring the riffs, and – borrowed from Rob Zombie and J. Yeunger or otherwise – this closing number does a great job.

Musically, this release has moments that show promise. Between the hypnotic repetitious riffs and hard edged sounds, Hereafter latch onto something that could easily be expanded upon. With the traces of doom at the heart of everything and an obvious love of early White Zombie and the formative years of a groove metal sound, the music has a rather timeless quality. It’s a pity, then, that some of the vocals are so bad. If you’re happy to approach this on its musical merits alone, it’ll certainly work better; although Hereafter are something of a one trick pony, when played back at high volume, it’s a fairly solid trick – especially if approaching the tracks on an individual basis.

This release has its rather obvious flaws but, even so, there should be enough here for the less demanding metalhead to latch onto. However, the best advice to get the best from this EP is to split the tracks and drop one or two into a favourite metal playlist: when heard in short bursts, Hereafter definitely sound much stronger. One to file under “promising, but not quite ready”.