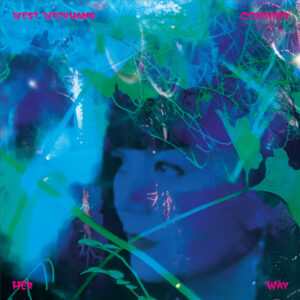 It was sort of expected that Jon would make West Wickhams a full time concern, but it wasn’t actually until 2018 – five years after those first rumblings – that the duo (also featuring Elle Flores) resurfaced. The digital single ‘He’s Acquired A New Face’ was released to streaming platforms and other outlets in 2019. Thanks to core melodies that drew heavily from early 80s gothic and new wave sources, the recording presented a more melodic band, promising so much for the near future. Unfortunately, the spread of the Coronavirus pandemic scuppered any real chance of proper promotion and live work, and a subsequent single ‘Who’s Out There?’ seemed to have a very soft launch as a result.

Released at the end of a northern hemisphere spring in a rather more settled 2022, the West Wickhams’ long awaited debut EP ‘Consider Her Way’ is a retro treat. Building upon the influences from those earlier tracks, its five songs pull together various light goth and new wave sounds, adding a wave of 90s indie along the way. It results in a listen that’s cold and detached, yet quite inviting at the same time.

The title cut opens with a combination of mechanised beat and chopping guitar, instantly creating a sound that isn’t far removed from The Cure during their formative years, and specifically the ‘Seventeen Seconds’ album. Jon’s clean rhythm guitars are overlaid by a crisp, ringing tone, while occasional bass notes pierce through the groove. Vocally, everything is far more sparse; occasional lines are thrown out into the ether, like cries for help, or unfinished slogans, with the title repeated as the main hook. As everything progresses, though, it’s clear that any vocals – despite even taking in the odd “la la” to fill space – aren’t anywhere near as important as the music itself. With an increase in volume and tone, the main riff fills the second half with ease, and if any Cure-isms were obvious from the outset, by the time the last few bars roll around, they become glaringly obvious – though never in a bad way. It’s great to hear Jon and Elle taking the heart of something classic and making it their own, and as such, ‘Les Mepris (Underwater)’ works a very similar trick, but weaves a little more dreampop into the overall sound. This very much builds upon the Wickhams’ early promise by allowing a cold, shimmering guitar to dance above the neo-gothic jangling rhythms, and its inclusion of reverb on the vocal and an occasional nod to a very 60s twang suggests a band who aren’t afraid of branching out. If anything here leaves an indelible impression, though, it’s a heavily filtered and multi-tracked vocal from Elle, used really effectively during the song’s second half to create a layer of sound. Hints of Cocteau Twins filter through, but at the same time, there’s a feeling that this detached, neo-gothic, floating entity is concerned with something far more ethereal.

Shifting towards the slightly rockier and more mechanical, ‘This Circus Is Over’ introduces a punchier bass set against a rattling hi-hat rhythm, and the cleaner approach allows Jon’s voice to be more audible. In keeping with the unwavering groove that takes hold from somewhere around the end of the second bar, his chosen lyric displays an equal love for repetition, but that – as you might expect – sets up a very natural sound. With a further focus on guitars here, and louder rhythm sounds overlaid by sharp lead work throwing out clean notes, this short number really taps into an 80s goth sound and has the potential to be the EP’s highlight, but in choosing to end it abruptly, it really sells the listener short. There’s little tension, and no sign of an expected climax. Maybe that’s the point; there are times when the West Wickhams feels as if they’re working with some relatively polished sketches, occasionally letting others eavesdrop on their work. As a result, none of the EP’s tracks ever outstay their welcome, or labour a musical idea until it becomes dull, but there are times – such as this – where a little more of a concession to grandness would certainly have created a much stronger first impression.

With elements of ‘The Zap Gun’ playing out like an early Cure demo colliding with an echo drenched Monochrome Set, there’s a slightly different take on a cold and clanky groove. With minimalist keyboards occasionally allowed to flesh out everything, and an angular lead guitar break taking centre stage with a succession of ascending notes followed by a much more aggressive instrumental workout, it’s all very satisfying. In some ways its the most focused track, before ‘Turning Into Someone Else’ teases with a soundscape of pulsing keyboards and sparsely delivered guitar. A lengthy intro gradually allows a Simon Gallup-esque rhythm to rise before a disquieting voice reprises lyrics from ‘The Circus Is Over’, creating a brilliant musical coda.

It might have been a long time coming, but this EP certainly builds upon the musical talents hinted at on those early West Wickhams singles. If you’re expecting the full scale noise and bluster of Dead Wolf Club at their peak – especially in the live setting – then even their best work might seem a little subdued, at least to begin with. However, these recordings present a DIY band who really value the idea that atmospheres and layers can be just as important as force, and although the hooks aren’t so big, there’s plenty within the retro soundscapes that should appeal to a wide spectrum of indie and dreampop fans everywhere. It’s the kind of EP that sounds better over time too, showcasing an act who really understands what it takes to bring those old Fiction Records and 4AD sounds to a new audience.