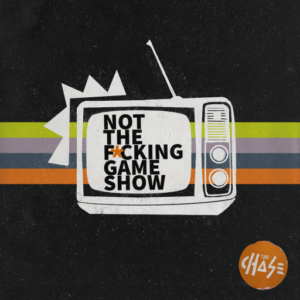 Indie rockers The Chase began issuing digital singles in 2018. Over the course of the next three years – and amid a global pandemic – they kept up an online presence by drip feeding their audience new material sporadically, one track at a time. Each new tune seemed to suggest bigger and better things, leading to high hopes for a full release somewhere down the track. With gigs back on the table for many bands by the beginning of 2022, things started to fall into place, and The Chase eventually released their debut EP, ‘Not The F*cking Game Show’ in May.

The EP’s lead track ‘Black Cloud’ was released as a digital single back in 2021, but if anything, it sounds far more impactful as part of this bigger release. The main riff crashes through like an old Strokes number bolstered by more of a rock ‘n’ roll heart. The repetitious and choppy feel from the rhythm guitar wastes no time in maintaining a presence, and contrasted with a spirited vocal that sometimes sounds like a more melodic take on The Offspring’s Dexter Holland, it really pushes forth The Chase’s punchier qualities. This isn’t just a straight knockabout, though; the track has various flourishes that accentuate some great musicianship, from a solid grumbling bass line to a coda where the already big sound is lifted further by a retro sounding bar room piano. In additon, areally catchy chorus ensures this quickly becomes a great slab of rock. Part 70s, part garage groove, and a pinch of pop, it packs a great deal into just two and a half minutes: all rock, no flab.

In direct contrast, the second single taken from the EP, ‘I’m Your Man’, couldn’t sound any different. Its mid tempo and driving keyboard riff set up a very 70s feel, and with that organ sound filling spaces between the verses, it’s hard not to be reminded of bands like Faces and even the pop rock of Ace, despite The Chase’s core sound being quite removed from both. From about halfway through the first verse and with a crashy guitar dominating, the band’s love of all things retro hits like a truck. There are moments here where their swagger is allowed to bloom rather brilliantly, and with vocalist Tyler latching effortlessly onto a repetitive hook, it’s the kind of track that’ll stick somewhere around the third play.

Tapping into something a bit harder, ‘Live To Die’ throws forth a massive keyboard sound that calls back to the new romantic and synth pop scenes of the early 80s, but contrasts that with even bigger drums and guitars that more than hint at the noisier elements of 90s indie rock, and of pre-Britpop bands like These Animal Men. As with the singles, The Chase have been able to take those influences and mould them into something that’s very much their own (maybe with a pinch of other 2022 scene makers, Skylights thrown in) and its great to hear Tyler absolutely going for it vocally when faced with the kind of shout-along hook that live audiences will take to their hearts.

As for the rest, the material mightn’t be as immediate, but there’s still plenty that showcases The Chase as a confident and tight musical unit. ‘Set The World To Rights’ shifts everything to the semi-acoustic at first, allowing Tyler to approach the melody from more of a soulful angle. Bringing the rest of the band in gradually, the musical backdrop slowly unveils something very much in the vein of an Oasis/Jet ballad, working an obvious Beatle-y core melody, but peppering that with a wash of late 60s organ work and clanging chord progression. For lovers of the style, its instant familiarity will be welcome, but for those hoping for something a little more energy conscious, it might feel like a step back from previous tracks. In an unexpected twist, ‘La La La’ brings a compliment of ska rhythms, a punchy bass and carny-esque organ, all offset by a semi-crooned vocal. A cornucopia of sound, it feels a little too busy at first, but closer inspection shows some great reverbed guitar and a strong melodic core. Interestingly, the la-la’s of the title are never laboured or delivered with a sledgehammer intent; instead the band uses the simple hook to boost a much tougher melody, leaving the vocal to echo in the back, sounding more like an ominous warning than a celebration. A couple of plays suggests a track that’s better than first appears, but whatever your take on it, the tight musicianship should be enough alone to offer huge entertainment.

Rounding out the EP, a live take of an earlier single, ‘In The Queue’ aims purely for fun, as the band strip the track down to its acoustic bones. With its strident chords and natural vocal giving the air of a busking workout, it may be minimalist, but it never feels like filler. Instead, its place here shows yet another side to the band on a short release that plays like a musical CV.

With songs that aim for the gut instead of the head, ‘Not The F*cking Game Show’ often feel more party rooted than cerebral, but it’s not in any way throwaway, and its collection of massive riffs and hooks mixes the contemporary and retro in a way that almost makes it impossible to date. The EP sometimes plays like the work of a band somewhere near the beginning of their musical journey and of one that will improve and mature, but for fans of riff driven melodic rock with an indie twist and of bands like Jet and Skylights, there’s plenty here that will already hit the mark. Come in for those brilliant singles, then stay for the rest: this is an eighteen minute hooky treat that puts The Chase firmly on the map.