It’s barely seven months since Electric Six last visited the Kent coast. In November 2021, the Detroit legends packed out the tiny Music Hall in Ramsgate, and tonight it’s the turn of its slightly larger cousin, the Booking Hall in Dover, to play host to the ever quirky Dick Valentine and his assorted friends. Unsurprisingly, the show is a sell out. Unbelievably, the band have attracted a few people in the audience who are seeing the Electric Six bonanza for the very first time. Using the Ramsgate show as a benchmark, whether a casual observer or died in the wool fan, everyone is in for a genuine treat.

By the time the night’s support, The Kut, is half way through a set of hard edged rock numbers with a slight alternative edge, the heat in the venue is immense, and a few people have already begun to cut loose. It’s showing immediate signs of being a night to remember. …And sure enough, halfway through Electric Six’s opening number, ‘Synthesizer’, there’s very much a feeling of being in the midst of something special. There has obviously been a couple of setlist tweaks since the last leg of the tour; in Ramsgate, ‘Synthesizer’ filled a much later spot and actually lost the set some of its momentum. Played as an opener, its mid tempo new wave flashbacks are far more effective in both building tension and allowing the crowd time to warm up. The sound in the venue is very clear, with a great separation between White Wolf’s guitar and a hefty bass sound, but Dick’s vocals are rather low in the mix. It doesn’t ever spoil a great groove, though, and by half way through a brilliantly punchy ‘Bride of The Devil’, any small gremlins have vanished. The chugging guitar sound builds further tension in the crowd and the band’s rockier side comes across brilliantly, before a throwback to ‘Senor Smoke’s ‘Rock ‘n’ Roll Evacuation’ cements the E6 gift for a more intensive garage rock frenzy, sending pockets of the audience into a full on bounce with its retro punk-ish heart.

Dick Valentine’s banter is short and snippy during the set’s early phase, choosing to count of the songs one at a time, leaving classic tunes like the much-loved ‘Naked Pictures’ and ‘The New Shampoo’ to do most of the talking. He’s not completely aloof, though: he takes time out to thank the audience for coming to see Electric Six when they could be “doing more important Jubilee things” and to call Boris Johnson “a twat” much to everyone’s delight. Predictably, the opening notes of the legendary ‘Gay Bar’ send the crowd into a mini whirlwind as they ring out above the attendant heads, and a very small mosh pit erupts, before being curtailed by the more sophisticated funk of the lesser known ‘Gay Bar Part 2’, showing off more of the band’s well observed funk chops. Now at the mid part of the set – or what Dick likes to call “Song nine…from one of the albums!” – everyone’s firmly on board and ‘She’s White’, another throwback to the best selling ‘Fire’ album is greeted with enthusiasm. At this point, the heat is unbelievably intense but the atmosphere is amazing; the venue smells like a potent concoction of spilt beer, candy floss and cheap perfume, and the crowd is firmly encased within a social bubble, forgetting the outside world and its escalating troubles. An already superb gig feels in danger of peaking, and the show is only half done…

As the set progresses, Dick’s amusingly stilted banter becomes even stranger, and it’s not always clear he understands how funny it is. ‘Roulette!’ – a standout cut from 2015’s ‘Bitch, Don’t Let Me Die!’ is introduced as “a song called Roulette!…about roulette…from the album ‘Roulette’…” before the band launches into a seriously funky jam that’s lost on pockets of the audience, but sends the first two rows into a meltdown, and the subsequent ‘Dirty Ball’ is supposedly “about dirty balls…from the album ‘Dirty Balls’…” (it isn’t). The rockier aspects of the E6 juggernaut really come through on this occasion, with the dual guitars really delivering a big sound, before Valentine’s affected vocal style – as expected – becomes even more affected and brings a superb sense of quirk to the distinctive Electric Six groove.

The set’s highlight, ‘Improper Dancing’, really shows how tight the current line up of Electric Six can be with a barrage of hard funk riffs, pummelled into the audience with a relentless power, and – indeed – it provokes a select few to burst into an impromptu dance, improper or otherwise. An older gentleman with grey hair and striped shirt appears to be doing “the swim” with a real vigour and his friend, a tall, thin, bespectacled lady, lurches and bounces so furiously, her pigtails almost appear in danger of leaving her head. To be fair, she’s barely stopped moving all night, but has obviously decided that this is her time to really let go. …And, frankly, who could blame her?  Subsequently, the massive hit ‘Danger! High Voltage’ is greeted with a huge roar, and a mass of feet shuffle and dance on a sticky floor, and the sight of a red haired woman gyrating is not one that’ll be forgotten by those in her vicinity. Considering that this has been a part of the Electric Six set since the dawn of time, it’s full credit to the band for treating it as if it’s still fresh, and the main riff on this occasion has all the spirit of those shows back in 2003. After claiming there would be no ‘Dance Epidemic’, the arrival of an intense ‘Dance Epidemic’ works White Wolf’s rhythmic funk chops with a genuine energy and the audience responds in kind. It might not be as sharp as it had been in Ramsgate, but that’s more to do with the larger room than the band’s approach to the actual performance.

The first part of the night’s encore is the evening’s only misjudged pick. ‘Germans In Mexico’ plays like a long drawn out drone, and although a lengthy spoken word introduction raises a laugh with its meandering narrative about taking the audience and “setting fire to them in a bag” before dumping them somewhere near Canterbury in some sort of ritual, the subsequent number sucks a lot of the energy from the room. Luckily, the brilliant ‘Dance Commander’ quickly sets everything back on track and sends everyone out on a high; sweaty, elated, fully immersed in Electric Six’s wantonly busy world of electro garage rock disco schtick, via a flawless performance that has three times the power of the album cut.

Seeing Electric Six again, this far down the line – long after the hits have dried up and the band are partly promoting a string of independent albums are only known to the devoted – has a feeling of experiencing something cult-like, but the experience never feels genuinely cliquey. The power in the riffs and speed in which the band are able to deliver a twenty song set is truly impressive, and their chosen material, almost flawless. Despite having eighteen albums under their collective belt at the time of this show, only nine get a look in (and, bizarrely, like the Ramsgate show, nothing from the most recent ‘Streets of Gold’ appears in the set), but it must be hard to curate something that really flows from such a large body of work. It must also be difficult to choose newer material when the band knows that it’s still the ‘Fire’ material most will want to hear, but tonight’s set has been taut, professional and – most importantly – brilliantly entertaining.

Electric Six’s set list for the Dover crowd hasn’t been too far removed from the earlier Ramsgate show, but it’s interesting how a different venue and a different running order has made the show feel like a very different beast. If nothing else, it’s been further proof of how the Electric Six live show is the band’s strongest asset, and how Valentine, in his attempts at being semi-detached and marching to his own drummer, actually becomes one of the best front men ever. There’s so much more to Electric Six than the over-exposed ‘Danger! High Voltage’ and ‘Gay Bar’, and this leg of the tour has been more than enough proof of that. If, somehow, you’ve still never seen Electric Six, or perhaps haven’t seen them since their days as festival regulars in 2003/4, you owe it to yourselves to catch up with them. You won’t be disappointed. 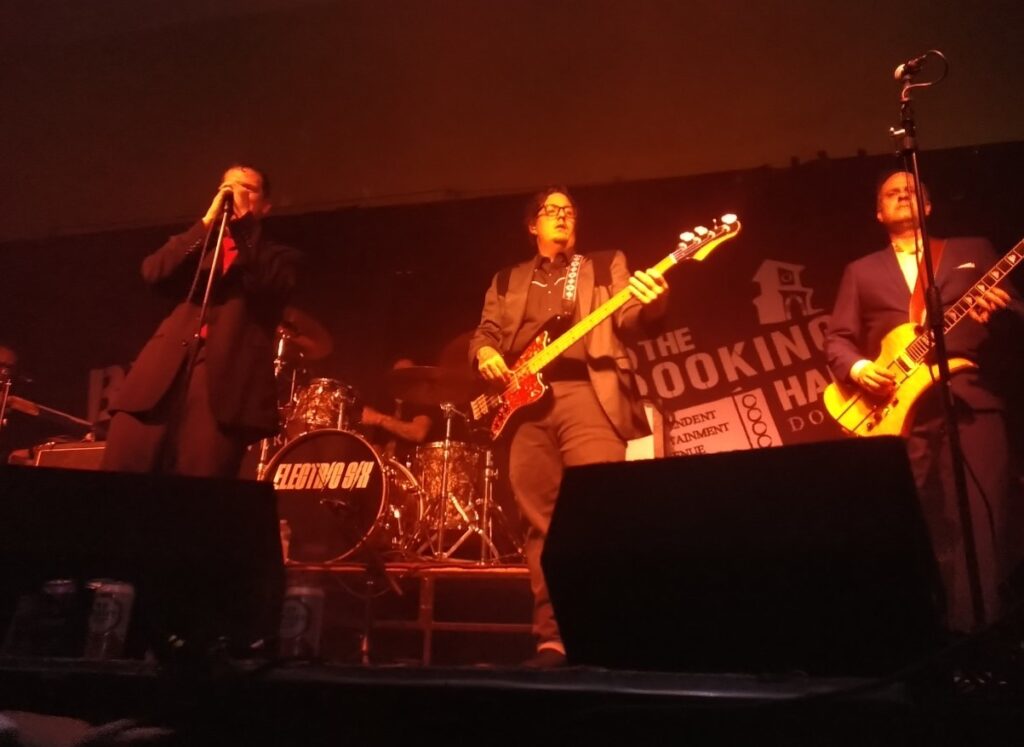