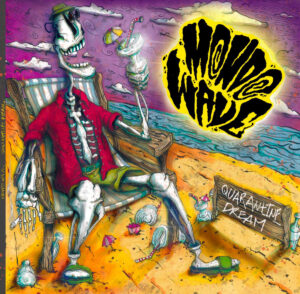 Mondo Wave’s ‘Quarantine Dream’ EP is potentially one of the greatest things to emerge from a troubled world. You might well think you’re tired of lockdown recordings and releases playing on the themes of viruses and quarantine, but this band are here to set you straight. Their 2021 release is a total blast; a short, sharp dose of garage punk that makes New Bomb Turks appear over polished and tired, and reduces The Hives to seeming like an over-commercial prospect. In a little over thirteen minutes, this will smash you into oblivion and make you remember all the best rough and ready garage punk noise of the 90s whilst still sounding new and exciting.

Following an intro sampling the Everly Brothers, ‘Say Aaah!’ crashes forth with a busy riff, heavy drumming and a wall of distorted vocals, as if the earliest Hives has been played back through various levels of echo and distortion. The band’s decision to take a punky core and dress it with an even more retro sound makes the Mondo Wave approach appear even more energised, but it’s the way the lead guitar cuts through everything with a siren-like riff really lends a vital kick. A sneering lead vocal provides the last ingredient and the end mix is so potent, Mondo Wave sound ready to explode. One line choruses don’t always work – left in the wrong hands, they just appear lazy – but Mondo Wave totally get away with such a direct angle here. The repeated refrain of “what did I do?” is over simplistic, but retains a reasonable amount of power through its vocal sneer, and the all round edginess is further increased via a rising guitar, creating the kind of punky banger that seems almost timeless.

‘Black Leather’ could well have been a super-charged cover of the old Johnny Thunders tune and still fit with the other material, but Mondo whip up something much better on their self-penned cut. A slower groove takes centre stage, with garage punk guitars shifting between a classic Stooges sound and a weird and woozy whirring groove, before an atonal lead break makes it seem as if your speakers are broken. It’s really ugly, and yet a few listens uncover a great tune that reinforces this band’s commitment to the garage punk cause. Somewhere within the musical melee, the vocals are as urgent as before; even the slower tempo does nothing to detract from their anger, resulting in another number that’s equal parts forcefulness and fun. Stretching out a little, ‘Dust Over Time’ has a much dirtier sound, and a bigger bass presence suggests the music was recorded live in the studio. Here, the punk is tempered by an aggressive twist on psychedelia with very 60s oriented rhythm guitars clanging relentlessly behind a spooky vocal, but (soon to be) fans will still recognise this as being the same band. It’s good to hear them exploring other avenues without losing any of their essential rawness.

‘Only You’ combines the usual garage punk core with a basic melody that sounds as if Dead Kennedys man East Bay Ray has stepped in on guitar. As you’d expect, that brings a little surf into the mix, but its slight. The shrill edges can make it hard to listen to – especially over a prolonged period – but, again, Mondo’s sheer sense of drive wins out and the occasional shouts of “Yeah you!” allow the performance to be catchier than the first listen suggests. Turning up the distortion further, the buzzing guitars at the heart of ‘Fade Into Time’ call back to the early Damned, which is enough to make it work, despite the general crashiness of the tune leading to something a little too repetitive. If you’ve enjoyed this EP so far, you’ll certainly enjoy this too with its hard combo of heavily treated vocals and thundering garage rhythms, but the unrelenting volume (it appears to be impossible to turn down!) and general bluster is a little more tiring. If nothing else, it ensures that ‘Quarantine Dream’ – when heard as a complete work – is a brilliantly uncompromising listen.

There’s nothing here you could ever call flashy, but Mondo Wave’s rehash of classic garage punk, peppered with a little surf ‘n’ psych, is definitely exciting. A hard and fast blast that’s almost guaranteed to get genre fans jumping, ‘Quarantine Dream’ is a download that punk/garage lovers need to snap up before it disappears…or the Everly estate issues a cease and desist.