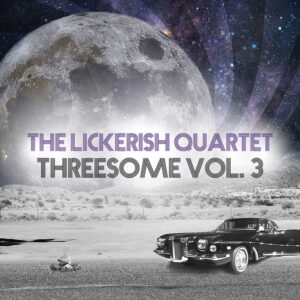 Expectations were high for the follow up, and ‘Threesome Vol. 3’ certainly gives Jellyfish fans a lot more of what they’d hope for. In particular, its lead track ‘Fortunately’ is far more immediate than anything on the previous EP. In opening with a mid-tempo shuffle and electric piano, it immediately calls back to classic Jellyfish, and a love for 10cc and Andrew Gold. That, in itself, is enough for the performance to work, but the addition of a retro lead guitar solo (something that, at first, sounds like if it should be a sax break), a wall of multi-layered harmony vocals and a brilliant pop hook take the track to glory. Eric Dover is in good voice throughout, but his work during the verses, rather understandably, takes a back seat to the heavily layered chorus and some complex instrumentation used elsewhere. The mix of smooth vocals, electric piano and handclaps that deliberately recall ‘New Mistake’ ensure it’ll become an instant fan favourite, and even if the flat drum sound makes everything sound so much cheaper than the nearest Jellyfish equivalent, it’s the kind of number that heralds a Lickerish return with confidence.

Opting for something slightly rockier, ‘New Days’ opens with a very 90s jangle, and then juxtaposes that with a late 60s beat group sound. This allows a punchy bass to shine on a slightly spiky verse, before everything slides into a slightly psychedelic chorus. The contrast of hard rhythm guitar, and Shondells-esque harmonies shows an obvious confidence, and the belated arrival of a harpsichord sound and descending vocal finally accentuates a rather obvious Jellyfish heart. This is more about layers, flourishes and eventual grooves than immediate hooks – bringing it a little closer to previous Lickerish Quartet works – but a few listens will uncover a real musical treat.

The early part of ‘You At Home’ focuses too much on synth strings and drum machines – unfortunately showing how much of a smaller budget has been employed in comparison to the Jellyfish classics – but looking past that, the arrangement and melody shows off some great quirks. There’s a spiky, almost XTC-like bassline at the heart of everything, supplying a genuine buoyancy throughout; a strong vocal that borrows from more modern pop like Portugal. The Man, an occasional new wave shininess that takes a few of the 70s derived quirks in a different direction and – eventually – a complex coda where brass and string sounds mix elements of a Maurice Jarre film score with a little Beatle-esque experimentation. Finally, ‘In The Meantime’ settles into some great, no frills pop rock that drops a couple of old Jellyfish callbacks into a track that isn’t a million miles away from the best Tail Fin Fiasco fare. As you might expect, jangly guitar parts and harmony vocals reign supreme, but those keeping a closer ear will certainly get a thrill from some of Roger’s keyboard patches, dropping in string and mellotron sounds as well as underscoring a busy guitar solo with a blanket of noise.

It’s safe to say that if you’ve enjoyed previous works from The Lickerish Quartet, you’ll absolutely love this release. These four songs will eclipse the first two EPs in terms of immediate pop charms, and the band seems to embrace the old Jellyfish sound far more than ever before. ‘Threesome Vol. 3’ ‘is no ‘Spilt Milk’, of course, but then, very little is – it’s unlikely that the classic line up of Jellyfish themselves would have equalled that (or even bettered it) had a third album been recorded. On it’s own merits, this confirms Roger, Tim and Eric’s easy knack for pop hooks and is easily the best thing they’ve set down for a long while, together or apart. If you have any interest in classic sounding retro pop, it’s an essential download.