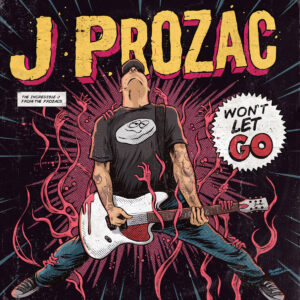 The title cut kicks everything off with a very melodic slice of punk where an overdriven bass sound cuts through a barrage of riffs. It’s more classic pop punk than straight Ramones homage, but there’s still enough edge in the lead guitar work to draw a parallel with ‘Enemies…’ era Screeching Weasel, which leads to a tough but balanced sound. As hinted by some of Prozac’s other works, though, its the vocal hook that counts, and between a brattish melody and a world of “oh-ee-ohs” cutting through a great chorus, this sets the standard for a great listen. A little rougher around the edges and flaunting an almost demo-like production, ‘For The World’ fills three minutes with a punky, punchy number that injects some ragged rock into some familiar punk tropes. Despite being a little on the repetitive side lyrically, it manages to win through due to a couple of musical flourishes that, again, are able to lift J’s efforts beyond bog standard melodic punk. In this case, a soaring lead guitar shimmers above the chunky riff, and during the mid section, an unexpected bass solo takes straight punk further towards the arty. As always, though, Prozac is the real star, and his bratty vocal takes the simple vocal and really runs with it, creating a poppy, punky workout that sounds better with each successive spin.

Shifting the mood, ‘Regret’ throws out huge trashy rock riffs, which straddles a great musical gulf between harder edged power pop and trashy glam due to some shrill lead guitar and a world of huge vocal waoahs . The lead vocal seems a little uneasy during the verse, dropping in between the chugging riffs in an almost robotic fashion, but the massive wordless counterpart creates a great hook even before J even goes in for the chorus. Perhaps due to the intermittent whoahs being so huge, the chorus itself doesn’t have any immediate impact. There’s a strong melody, but the words seem less important than the tune somehow; however, a few plays sets that straight, and between its simplicity and punch, there’s just enough here to deliver a two minute fun filled tune that suggests J’s gifts for throwaway power pop could be as strong as the punk with which he gained his earliest success.

If it hasn’t already clocked that ‘Won’t Let Go’ is an album unafraid to experiment with a couple of different styles, the emo-centric ‘Days Go By’ makes that abundantly clear. Armed with just an acoustic guitar for the opening verse, Mr. Prozac stresses the importance of retaining thoughts “of the ones we love” before the music switches to electric riffs, and power pop – and yet more Spector-ish flourishes – fill the air. The first verse is wobbly, but it’s a track that improves as it goes, with some pleasing musical twists. It’s unlikely to be an immediate hit with most, but there’s a mature appeal in the way the guitars ring out, almost recycling the riff from ‘Be My Baby’, and also in the way that Prozac is able to stretch his admittedly limited vocal and make it work.

Elsewhere, a punchy cover of Dirt Bike Annie’s ‘Thirteen Days’ showcases the best of Prozac’s punky charms when fully loaded with a dirty guitar chug, and ‘Here With Me’ works a great melodic guitar sound, adding another pop punk/power pop hybrid to the album in the process. Between some brilliant bass work and strong riff suggests something superb, so it’s a pity that the main lyrical hook sounds as if it were signed off after being half written. J has often championed the simple and direct approach, but the one line chorus really sells some great music short. Another standout, ‘Beat of Our Hearts’ mightn’t push any boundaries, but for fans of older Prozacs tunes – and of J’s old bandmate Glenn Robinson – it could be an instant classic. The riffs come thick and fast; the rollocking drums crash through harder than ever before, and from somewhere around halfway through the first verse, J’s classic yelp really comes into play in the most fun way. A careening, carefree sound augmented by yet more whoahs sets up a great tribute to 90s punk the way you always loved it, and a final lead guitar break with a multi-layered tone gives the music an unexpected richness. It’s very much a confirmation that, as trashy as this may all seem, it’s certainly not been tossed off.

There’s a lot of great music to be found here, but like all punk musicians, J isn’t infallible. The album’s only true misstep, ‘Claustrophobia’ opens with a pulsing rhythm and heavy bass, over which he delivers a vocal melody that sounds like an inebriated tribute to more old Phil Spector tunes. Despite this style being allowed to fly during ‘Won’t Let Go’, it’s clear here that J doesn’t always have the chops for such things, unfortunately. Thankfully, as the music builds, the tune is rescued by a great power pop backdrop where ringing guitars veer a little closer to recordings by Kurt Baker and The Connection, and if that doesn’t win over any doubters, a final round of high octane “na na nas” certainly will. From unstable beginnings, ‘Claustrophobia’ gains a strong musical grounding, but it still has the dubious honour of being this album’s weak link.

At least eight of the album’s eleven cuts are of a gold standard punky power pop, but if that’s not enough, the digital release adds a handful of welcome bonus tracks, including a great version of the Tom Petty hit ‘I Won’t Back Down’ (originally from the ‘Behind The Mask’ EP), an alternate version of ‘Behind The Mask’ (which, in all honesty, isn’t so different from the original) and Prozac’s brilliant, energised take on The Manges’ ‘Mandy’, which fans will remember from the earlier ‘Building Blocks’ download. All of these extras very much add to the quality and value here.

There are a couple of tracks that might not sit so well with the melodic punk and pop punk purists who’d like a follow up to the Doubtfire LP, and ‘Won’t Let Go’ has a few flaws, but overall, this is a seriously good album. It’s varied enough not to feel like it was created on the quick and the cheap for an easy buck, but still just about ragged enough to supply an energetic half hour that’s way more appealing and authentic than so much overly slick pop punk that fills Bandcamp during any given week. Whichever way you look at it, it’s the kind of record that deserves to widen J’s fanbase considerably. In short, despite one or two musical wobbles, any faith fans might have placed in Mr. Prozac off the back of the ‘Building Blocks’ single certainly won’t have been misplaced.