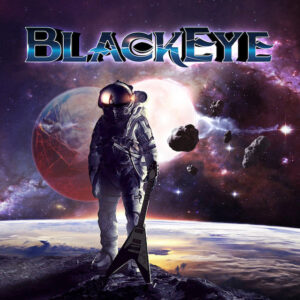 A new project for 2022, Black Eye teams Readman with Doro guitarist Luca Princiotta, DGM bassist Andrea Arcangeli, and Stormlord drummer David Folchitto to create a powerhouse of Euro riffs. Although pitched as a “melodic metal band”, that label is only relevant about fifty percent of the time. On the tracks when the band scale everything back to a solid chugging riff, or occasionally experiment with a massive pomp/AOR crossover, they sound great. When Readman and his cohorts go hell for leather into a world of speed driven Luca Turilli-esque bombast, they seem intent on only preaching to the converted, with sounds that are often anything but melodic.

The album’s genuine highlight comes from ‘Time Stand Still’, a massive AOR/pomp/metal hybrid that sounds like Pink Cream 69 jamming on an old Treat number. Across four very well arranged minutes, the contrast between Princiotta’s weighty guitar, Mattia Gosetti’s dense keys, and several broader, lighter musical strokes results in some brilliant retro melodic rock. Moving between a melodic cry and full on squeal, Readman takes this opportunity to show off his full vocal range, and the presence of a great AOR inflected chorus definitely helps a bunch of tried and tested melodic rock and metal ideas to fly. Likewise, ‘Midnight Sunset’, a slow piece bolstered by synthesised strings and fat bass notes, pushes forward with a mid tempo that calls back to the best Pink Cream numbers. Atop the very pompy sound, Readman shows how he’s still able to call upon his most melodic side, crooning ably as if something from his solo albums have landed in the lap of David Coverdale in an uncharacteristically theatrical mood. Princiotta’s lead guitar work, meanwhile, demonstrates a great gift for a lesser heard bluesy tone. It’s a far cry from Black Eye’s more metallic tendencies…and much better for it.

The purely metallic can work, too, of course. On tracks like ‘Break The Chains’ – an instant stand out – Princiotta’s slightly downtuned juggernaut sounds superb, and its darker tones really allow Readman plenty of scope to latch onto a massive performance, often landing somewhere in the region of Chas West’s finest wail on the West Bound debut. He occasionally lapses into wanton screaming, but there’s a feeling that this is merely a tool to show how much force Black Eye can inject into everything. The marriage of giant riffs and retro squeals, obviously, creates an incredibly solid slab of Euro metal. Yes, it has sound where the riff is almost everything, but when dialling back a little, Readman’s ample vocal style pulls the very best from a brilliant Dio-esque chorus. For lovers of that 80s style, there are flashes of brilliance throughout, peaking with a terrific guitar solo, suggesting that Black Eye are capable of really delivering with such a massive sound. ‘The Landing’ shows moments of equal promise, but suffers from a weird squealing pre-chorus and a little too much bombast, but its best moments come across like the Graham Bonnet Band giving their all, and that’s enough to save face. The main guitar riff here has a huge heart that calls back to classic Impellitteri works, always giving Princiotta plenty to work with. When the riffs subside, various orchestrated elements sound especially bold set against a huge vocal, and Black Eye’s combination of pomp and metal sounds big and impressive.

Elsewhere, ‘When You’re Gone’ opts for more of the same – hey, if it ain’t broke, don’t fix it – but manages to inject a much bigger chorus, taking the band into the realms of Ring of Fire and Mark Boals, but there’s a little more melody to be found thanks to an especially impressive lead guitar break where Luca slides between lightning fast arpeggios and bluesy fills without missing a beat. A huge bridge into the last chorus fills time with some brilliant Nightwish-esque orchestration (via a keyboard), again showing off a real potential when it comes to the big and bombastic. Eventually having built up a huge arsenal of sound, the band goes for one final big push and drummer Dave brings out a full barrage of double bass pedals, making Black Eye sound like a truck. For lovers of huge, Euro rock and metal, it’s definitely worth an ear.

There are times, though, where too much bombast can be a bad thing, especially in the hands of a band who don’t always understand – or sometimes care – that less can be more. During tracks like ‘The Hurricane’ and ‘Under Enemy Fire’, most pretence for great melodies flies out of the window. Attempts at recreating Rhapsody’s theatrical power metal quickly result in tiring affairs that only the most foolhardy would listen to more than a couple of times. ‘Under Enemy Fire’ has the benefit of a massive hook, but no real tune. Readman yells and screams his way through the entire thing like an 80s metal singer unable to hear himself, and after a couple of minutes it all becomes really tiring. ‘The Hurricane’ – one of the album’s worst tracks, used as the opener – never really rises beyond speed driven Euro metal by numbers, where Readman clearly believes that volume can trump everything and create a great performance. Never has four minutes with a man absolutely caning his lungs and vocal cords seemed more dated or tedious. It’s a world away from solid material like ‘Time Stand Still’ – with that track hidden away at the end; you might not even make it that fat…and assuming you do, it really doesn’t sound like the same band.

In terms of very European sounding metal, this album has a solid core sound, but that isn’t always enough. A handful of massive choruses lift the general bombast to something more memorable, and when thinking about melodies first, Black Eye actually have plenty of old school promise. Unfortunately, they don’t always value melody over sheer force, and so it isn’t often easy on the ears. Half of the material certainly isn’t as tuneful as the band thinks it is, and Readman’s penchant for screaming goes into overdrive more often than would be preferable. Basically, if you’re expecting something that’s a bigger version of Pink Cream 69 at their most appealing, or perhaps a weightier sounding version of David’s excellent self-titled solo debut, there are one or two tracks that fit the bill, but in the main…forget it. When the stronger material gets a chance to shine – as it does from time to time – this is certainly an interesting musical detour for the Pink Cream man, and provides a welcome opportunity to hear other Euro musos stretching out. However, with the best will in the world, this album can’t be recommended to everyone. Its half dozen really great tracks will certainly go a long way to making Black Eye’s first musical venture a welcome collection filler for Readman’s more devoted fans, but it’s hard to imagine many other people taking this album to their hearts in the long term.