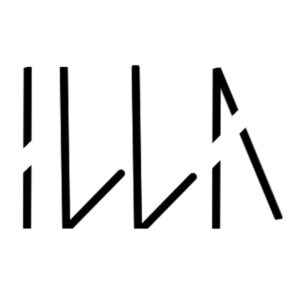 Formed by Tan (the ex-frontman for death metal band By The Patient) and Martin (the ex-vocalist for Danish black metal act Lupus), Illa presents something of a departure for both musicians. Combining a groove metal heart with some serious hardcore/metal crossover chops, this EP retains the kind of intensities you’d expect from both men, but uses their talents in a very different – and more accessible – way. Their four track debut is a riff heavy affair that’ll pretty much appeal to anyone with any interests in hardcore and crossover sounds, since its four tracks are a sharp reminder of why the metal infused influences from bands like Strife and Earth Crisis never seem to go out of fashion.

‘Regrets’ opens the EP very strongly with a brilliantly harsh riff where a couple of descending notes collide with something circular. It’s stripped down feel is very natural, but its solo presence has the knock on effect of making the following riffs sound even more aggressive than they already are. After a couple of seconds the full band makes a grand entrance and the sheer crunch is impressive. Using a few groove metal sounds to underscore some serious hardcore, there’s an obvious influence from ‘Sacrament’ era Lamb of God, but fans of the style will even hear elements of more modern practitioners of sledgehammer riffs like From Under Concrete Kings, and even occasional throwbacks to pioneering bands like Earth Crisis. The vocals are harsh, but never impenetrable; the shouted approach is the perfect compliment for the escalating riffs, while the lyrics – dealing with depression, comfort eating and feeling “trapped inside” – hit the listener like a proverbial fist. The messages here are some of the EP’s most direct, but in terms of grabbing your attention, it’s all pretty much perfect, and with the groove shifting between classic hardcore and a mid-tempo chug throughout, Illa quickly set out their stall as a great band with a genuine purpose.

‘True Self’ stokes up the circular chug, bringing in traces of ‘Trendkill’ era Pantera and a slight influence from a couple of Slayer’s slower numbers to bulk out a superb intro, before the previous sounds emerge leaving Illa sounding like a superb, super-charged and modern hardcore band. The slower, heavier riffs are dropped between the verses and are used brilliantly when punctuated with a heavy drum, and during the angrier moments, Tan absolutely canes his vocal cords as he takes the listener through a mantra about honesty and inner strength. The riffs are so solid that there isn’t any time for too much further embellishment – Illa aren’t big on flashy solos; the songs are about the message – but an extra layer of guitar creeps in at the end to further beef up the sound, suggesting that, for all of their bluster, Illa recognise the importance of textures beyond pure anger. Again, although short, this is another superb piece of hardcore with balls and brains.

During the title cut, it’s a real joy to hear the drums embark upon something much crashier when Illa mix their metallic hardcore with a few traces of Downset, before dropping into some bottom end riffs that’s are some of the EP’s finest. First, an intermittent chug punctuates some heavy drums, and then everyone settles into something that sounds like a much heavier version of Anthrax circa ‘Stomp 442’ – a mood reinforced by the collision of the downstroke and bass drum. For the vocals, it’s pretty much business as usual, with message driven anger that isn’t shy in stating its importance – and by now, if this EP has clicked with you at all, more of the same starts to feel like a very good thing indeed. Taking a moment to slow down a touch, ‘Wastelands’ sounds even heavier in places. The riffs come without mercy; the vocals even more so, and as the track progresses, they actually start to sound more like Max Cavelera circa 1994, which – obviously – isn’t really a bad thing. The slower, sledgehammer hardcore style present during the chorus doesn’t reach for originality, but the crunch of the production and the effortless way in which the riffs are delivered is enough to create some of the best hardcore sounds ever.

With these four tracks setting Illa’s main interests firmly in place with the minimum of fuss, this is an absolutely superb EP. The band’s fusion of forward looking hardcore and socially aware lyrical barbs are perfect for each other, and as a result, the material sounds ready to run rings around any potential competition. If you have any interest in crossover hardcore at all, this is a download you cannot afford to miss.