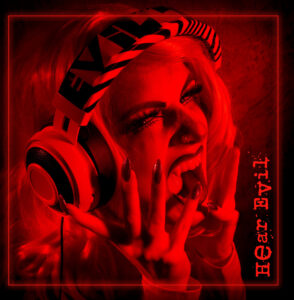 Nine months on, the second instalment ‘Hear Evil’ is a marked improvement all round. Its three songs come with the same massive crunch, but just as importantly, the lyrical hooks seem bigger and a little more cerebral. This is at its most obvious on the EP’s standout ‘Father Genocide’ which speaks broadly of “morality stripped from the land of the free” and “the devil’s reckoning” which, at the time of release, seemed even more poignant than the band ever could’ve guessed at the time of writing. With its damning message coupled with some great metal often drawing from 80s NWOBHM, thrash and a pinch of doom, it’s very much Bang Bang Firecracker firing on all six. Musically, the five minute workout really doesn’t skimp on some superb touches. From the opening bars where slow riffs are augmented by a sledgehammer crunch, through passages underscored by busy Cliff Burton-esque bass, blocks of classic thrash and even an instrumental interlude where darker tones tease with a deep groove, almost everything is on point. It’s lacking a shredded, old school lead guitar break, but since the main riff – all dark and ominous chug with horsey squeals – is so massive, the track doesn’t suffer for its absence.

Even more direct, ‘The Power of The 72’ comes across like a hybrid of a Euro power metal band and a couple of Blaze Bayley cuts, with frontman Kieron Berry tapping into a brilliantly gravel-edged vocal which sounds very confident. His strong presence very much drives the verse with some chugging guitar lines, but the broad appeal in his no nonsense style comes into its own when set against a melodic counter vocal on the chorus. Having set the groundwork for a great track, he then fills several bars with a scorcher of a lead guitar break, tackling a surprisingly bluesy tone for a full throttle metal banger. The rhythm section, meanwhile, adopt a solid presence throughout, always anchoring the solid groove. Although bassist Marcus Wrench would undoubtedly love to cut loose once again, he’s smart enough to know when to pull back and let a great vocal hook shine. More of an unashamed stomper, ‘Set The World Ablaze’ has traces of ‘Cowboys’ era Pantera beneath a crashing drum part (played impeccably by Bob Ansell), but often takes on a business like approach to a 90s metal sound where deep guitar riffs chug against a bass drum, Anthrax style. With Kieron dominating with another huge vocal that wavers between a croon and a menacing presence, the music doesn’t always have as much room to stretch out, but a solid guitar riff and a coda with jagged rhythms and stops delivers enough classic metal between them to sustain a lean and fuss free four minutes.

Overall, this is fantastic metal. It has enough of a retro sound in places to appeal to those who’ve not moved on too far from the old denim and leather brigade, but tempers that with a 90s edge that always helps Bang Bang Firecracker’s self-proclaimed “classic metal” heart to keep pumping. As before, the EP format only serves the band’s direct approach further: with three songs coming in at a little shy of fifteen minutes, there’s no time for the listeners’ attention to wander, or for the band to indulge in needless filler. It might not break any new ground musically speaking, but it really doesn’t need to. ‘Hear Evil’ brings riff after riff of solid metal greatness. Recommended.