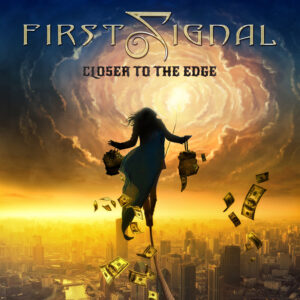 After releasing two solid melodic rock albums, First Signal delivered a genuine masterpiece with their third disc ‘Line of Fire’. On that recording, the union between vocalist Harry Hess and versatile guitarist-for-hire Michael Palace was truly inspired, and the resultant set of songs rivalled the early Harem Scarem output. In many ways, setting such a high benchmark meant that any follow up would likely feel a little inferior, but there’s still plenty about First Signal’s 2022 release ‘Closer To The Edge’ that comes to the gold standard of melodic rock, at least in terms of both composition and musicianship.

It’s always a genuine pleasure to spend time with Hess in good voice – and when on form, his ability to sell a huge chorus is as effortless as it was back in 1993 – and the increase in shiny keyboard sounds throughout this album is very welcome indeed. Both of these factor very highly during the opening pair of tunes, with ‘Don’t Let It End’ contrasting a world of stabbing keys from 1987 with a crunchy riff that brings the melodic sound more up to date. A couple of the riffs may be a little too heavy, but Hess’s melodic streak pulls everything together, and via a soaring vocal, the heart of the best First Signal still beats strongly. The even slicker ‘I Don’t Wanna Feel The Night Is Over’ pulls elements of Harem Scarem’s debut and blends them with extra harmonies and an absolutely killer guitar solo. In lots of ways, it’s exactly what’s expected from Hess, but any predictability makes it all the more enjoyable. By the end of this second track, fans will almost certainly love the quality of the old school song writing and massive hooks, so it’s a shame, then, that the final mix sounds so lacking in dynamic range – even a little distorted at times. These shamelessly retro tunes so deserved a sympathetic, clean final mix and not the dense wall of sound that appears to have been foisted upon them. Still, if you don’t care too much about that, you’ll have a ball, and once you’re ears have tuned in, it’s obvious that these are the first steps to another great release.

‘Show Me The Way’ is a definite highlight, since it offers a strong, driving guitar riff set against some pompy keys and a vocal melody that’s a dead ringer for a number of tunes from the Jeff Scott Soto back catalogue. With a barrage of filtered, harmonic voices dropped between Hess in full flight throughout, the effect is like experiencing a mash up between early Harem Scarem, early 00’s Soto, and one of the better second division bands from the Frontiers stable, and the rock balladry of ‘One More Time’ acts as another direct throwback to the Scarem debut, and an obvious successor to ‘Line of Fire’s strongest moments. Despite another odd mix where a slightly abrasive guitar tone seems bent on smothering parts of a great chorus, there’s a superb song in here. With Hess on form, and a terrific lead guitar break that fills several bars with some very emotive vibrato and sustain that’s very sympathetic to the vocal itself, its easy to imagine this song becoming a future fan favourite. In comparison, ‘Got To Believe’ takes a little longer to embed itself due to a rather slight intro, but once its rockier elements kick in, fans will hear the heart of early Harem Scarem beating very strongly, but given a slightly more modern twist via some crying bluesy leads from long time collaborator Michael Palace. It doesn’t try and break any massive ground for the band or genre, but is impeccably played – and in this case, that’s more than enough to make it stand firm.

A softer number, ‘The Hurting One’ mixes AOR flair with a few keyboard noises on loan from The Beatles circa 1969. Unsurprisingly, this takes First Signal into a world that sounds like a blend of Harem Scarem meets Chip Z’Nuff, or even revisiting a deep cut from Scarem’s own ‘Karma Cleansing’ LP. It starts well by mixing the obviously poppy with an AOR slant, but after exploding into a very 80s chorus where harmonies collide with a solid rhythm, it becomes almost perfect from a compositional viewpoint. In contrast, ‘Mystery’ ploughs ahead with a punchy rhythm, over which crashy riffs provide a pleasingly rocky backdrop for Hess to work with. He really shines here and that voice is unmistakable, but musically it’s a little more Work of Art and Blanc Faces, which only shows First Signal’s willingness to branch out. Elsewhere, the title track mixes AOR and pomp effortlessly. In many ways, there are elements of the arrangement that feel like a Hess project on autopilot, but there’s a great pleasure in hearing his voice cry above busy keys during an all too brief bridge between verse and chorus, and the massive harmonies therein – although heavily filtered – are lovely. A brief guitar solo threatens to recycle Neal Schon’s work on ‘Who’s Crying Now’ before doing a quick U-turn into busy tapping is especially smart, showcasing Palace in effortless form. Again, First Signal aren’t reinventing rock music, but merely reminding everyone of their fine AOR credentials, but as before, the end result is hugely enjoyable.

Aside from a heavy moment or two during the opening number, ‘Closer To The Edge’ doesn’t offer any big surprises, but by coasting confidently and delivering more than a handful of massive choruses, it gives the band another solid addition to their growing catalogue. It isn’t perfect – occasionally, the compressed mix has a lot to answer for – but is still actually better than most things Harem Scarem have released since ‘Karma Cleansing’ in the mid 90s. For most discerning melodic rock fans, it’ll certainly be a welcome addition to their collection.

Buy the album here: FIRST SIGNAL – Closer To The Edge