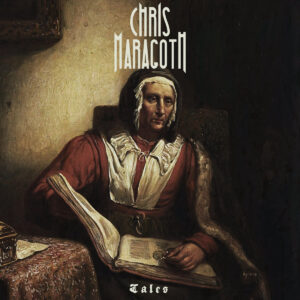 Chris Maragoth, a composer and multi-instrumentalist from Germany, made his early musical steps as a member of various short lived bands and as producer of black metal act Draug. In many ways, though, his solo career has been a factory reset in both terms of melody and the potential to reach a wider audience.

His digital single ‘The Entrance’ (released in 2019) paved the way for his brand of DIY goth rock and prog metal with its world of synthesized strings, Munsters-baiting harpsicord melodies, dour choral sounds and harmonic riffs. However, by the time of 2020’s ‘Lost & Separated’, he’d very much expanded on that, and the addition of Nadine Hope’s soaring vocal allowed him to tap into more of an Evanescence inspired sound. The budgetary constraints were often obvious, but it was clear that Chris believed in his art, and that was enough to make it hold up – at least in the short to medium term – from a listener’s perspective.

His 2021 release, the ‘Tales’ EP, presents three numbers that further expand on his DIY symphonic/goth rock vision, and providing you can look past its audio and budgetary shortcomings and focus purely on the intent, the featured performances have enough of charm to stand on their own merits.

With a rumble of thunder, a theatrical piano, and a mournful cello sound, the opening bars of ‘Tales of a Girl’ suggest Chris is taking us into straight into Evanescence territory, but the track then takes a dramatic left turn as the titular performer ushers in a wall of harmonic guitars much closer to a world of Euro prog metal. His tone is great, even if the sense of force is somewhat diminished by the demo quality recording in hand, but soon enough, that becomes almost irrelevant with the arrival of a vocal. Reprising her role from the previous EP, Nadine Hope is in very good voice, and in many ways, she’s the one steering the performance to glory via another very confident performance. It’s barely a few bars after her first notes have faded that everything settles into a more predictable symphonic rock sound – sort of a Nightwish on a budget of €37.50 – but the union between the guitarist and vocalist is very strong. Across the following four minutes, Nadine swoops and soars in the manner of someone taking on a much bigger mantle, and the clarity of her voice as it dances through a huge chorus is impressive. Michael’s heavy chug from the second verse and beyond is also great. Any feelings of this being generic are perhaps justified, but there’s plenty here – whether from some strong guitar work, an unexpected bass interlude, or the eventual appeal of the chorus melody itself – that makes it a worthy addition to the genre.

The EP’s highlight, ‘Tales of My Demise’ opens amid the sounds of the ongoing storm, only this time, the sounds of cawing crows suggests we’re in a damp, foggy graveyard, and the scene is akin to a cold opening from a classic Hammer film from the mid 60s. Chris arrives with a melody that blends the unsettling melodies of an old horror score with moments carrying a folk rock lilt, and the mix of sparsely used piano against a buoyant acoustic melody is very effective. Crashing, metallic power chords usher in a sense of doom, but its then all change again for a gothic waltz, where the piano and strings lead everything somewhere more ominous. Eventually, a symphonic metal groove takes centre stage, and Chris’s overall feel, showing both a general force and ear for a melody, could match some of the genre’s stronger talents. Once the melody subsides, a thinner, almost banjo like sound appears to teeter on the edges of wanting to play the theme from Steptoe And Son. It’s a very bizarre twist but in being so daring, it accentuates the composer’s desire to throw so many different ideas into this concise piece, all of which sound very good for a one-man recording. Finally, almost acting as a glorified coda, ‘Tales of Love & Tragedy’ brings everything full circle with another storm, a striking clock and the kind of musical box melody that would make Dario Argento rather over excited. The bell like melody stretches itself into an equally quirky piano riff which, again, sounds like an overture for a horror movie, and by fading out through the further sounds of music box chimes and laughing children, it has the power to bring some very unsettling nostalgia despite being an original piece.

In lots of ways, when looking at the influences and moods on an individual basis, ‘Tales’ can feel a little generic. However, there’s plenty about the way Maragoth uses these musical traits – especially in teasing with elements of horror scores – that results in an enjoyable listen. With just enough variation between each track, this shows how Maragoth’s world is growing, but it all sounds even better if you sequence each of his singles and this EP together for a long-form listen. There might not be much here to win over those who’ve been unmoved by goth- and symphonic rock in the past, but for lovers of bands like Phantom Elite, False Memories et al – especially those who really don’t expect perfection in terms of production – this will almost certainly provide a welcome musical distraction.