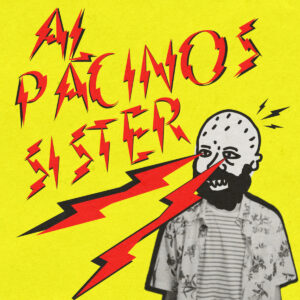 There’s a little more to this band than that, though. Al Pacinos Sister (note the lack of punctuation) certainly draw from a couple of early American hardcore legends, but a very British accent and incredibly DIY production job give their hardcore sound a twist, almost as if the Keith Morris era of Black Flag has collided with early Idles and been reinterpreted somewhere in a garage on a housing estate somewhere in Otley.

‘Not That Punk’ opens the release with a thirty second burst of noise centred around a shrill guitar riff that bounces back and forth, offering a massive, sharp hook that sounds like the core of an old Minutemen number, whilst dual vocals shout with abandon. The vocals are half buried within a wall of noise so, in some ways, the lyrics are unimportant. What’s clear here is that the band use these voices in such a way there are slight callbacks to top UK noise-makers Get The Fuck Outta Dodge, and the relentless grumbling is almost as aggressive as the music itself. The title track works a buzzsaw riff that sounds like a direct descendent of Circle Jerks’ classic ‘Live Fast Die Young’ interspersed with an even more brutal thrashcore heart. For lovers of traditional retro hardcore noise, that’ll be enough to see it through. The guitar work is incredibly sharp, which is lucky since the vocal – again – remains half buried in an unrelenting musical swamp. As with a lot of APS material, of course, it’s the sheer energy that counts, and in reworking straight hardcore to their own lo-fi model, this band comes up trumps here once more, even if the finer points of the performance aren’t always clear.

‘David’ is an obvious standout in terms of production and riffs. Adopting a much punchier sound, the heart of the track falls somewhere between ‘Nervous Breakdown’ era Black Flag and a couple of tunes from Natterers, showcasing some taut riffs against a shouty vocal throughout. Despite only clocking up a full minute, the speed of the riffs and the inclusion of a brilliantly atonal Greg Ginn-esque guitar solo gives it the air of a hardcore tour de force, before ‘Hugs Not Drugs’ returns the band to a buzzing, frenetic noise where a slurred and brilliantly ugly vocal accentuates a manic arrangement. Here, crashing drums and even more speed driven riffing blends American hardcore tropes with the anger of the UK underground, offset by an irreverent humour. At the midpoint where you suspect this’ll be just another slab of knockabout noise, everything takes a left turn to introduce a lightning fast, muted guitar riff that’s used effectively to crank the tension beneath a natural vocal. It doesn’t always add much in the way of melody – or suggest that APS are in any way interested in attracting an audience not already well versed in their obvious influences – but it certainly hints at how their brutalist musical approach could be stretched without losing any of its power, should they so wish.

Cranking through four songs in as many minutes, this EP is devastatingly short. It’s also utterly uncompromising, and potentially quite brilliant in its own simple and direct way. Obviously, this kind of no-frills hardcore rarely leaves room to be too inventive, but ‘Trained In Karate’ definitely offers some genuine excitement for fans of the genre.