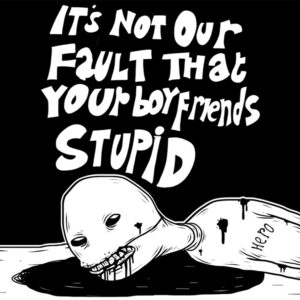 Get The Fuck Outta Dodge are insanely prolific. ‘It’s Not Our Fault Your Boyfriend’s Stupid’ is the duo’s fourth release in a little over fifteen months. Unlike most bands, a global pandemic didn’t slow them down. If anything it amplified their work ethic, since James (bass/shouting) and Ren (drums/more shouting) could effectively work within their own bubble, and their quick and cheap recording approach more than lent itself to working within a limited set up.

This album was recorded in one day with Artic Monkeys producer Alan Smyth and continues the Dodge aural assault with a maximum intensity. Despite the same lo-fi drums and bass set up, the album’s best tracks aren’t by any means a predictable rehash of past works, however. Between Smyth’s technical knowledge and a duo absolutely brimming with confidence, fans will discover various new elements within the world of noise, some of which make the material feel somehow broader than before. This is at its most obvious during ‘Dial M For Control’ which introduces the kind of stoner bass sound that powered the earliest Melvins recordings and has a much cleaner mix that stops the (dis)harmony of the dual vocal being drowned out quite so much. Everything’s still really shouty, but with less of a “boombox recording from a basement” vibe, the contrast in Ren and James’s voices provide more of melody, relatively speaking. The basis for the music remains pretty much intact from the band’s earlier blueprint – tight and angry, and devastatingly natural – with the drums smashed into oblivion and a deep rattling bass pushing everything forward, resulting in a solid Dodge sound. The bigger focus on technicalspects also makes its presence felt during ‘And How’s That Working Out For You’, again, giving the bass a much warmer sound throughout. The old fuzz is there, but its now carrying a slightly more commercial tone, without actually being commercial, and due to those four strings being attacked with the same vigour, there’s a genuine anger lurking beneath everything. With part of the hook reworking the main melody from an older classic ‘Let’s Get Fucking Physical’, there’s plenty here for older fans to love, without actually feeling like a lazy rehash or cheap throwback.

An instant highlight, ‘I Am Not A Robot’ whips up a repetitious groove that’s bizarrely funky, with James’s bass locked into a heavily overdriven riff. The verse is almost too overbearing with the bass centred around the same repeated note, but Ren’s drum sound and counter vocal soon lift the piece to bring it closer to a more typical hardcore workout. In the past, such an arrangement might have sounded unfinished, but the way Smyth has brought out the vibrancy of the bottom end gives the kind of completeness that peak Death From Above promised, though rarely delivered quite this well. In terms of massive riffs that sound brilliant played back at high volume, ‘Our History’s A Lo-Fi Mystery’ is an immediate hit with a dirty bass driving against a heavily smashed snare drum. James chews into a lyric that never goes too far beyond rhyming words spat with a cocksure tone, but in many ways, that’s all that’s really needed. With his natural delivery interspersed by Ren dropping in a few insane yelps from behind crashy cymbals, these seventy one seconds serve up more brilliant bass and drum furies that – at this point – probably couldn’t be mistaken for anyone else. In a musical sidestep, ‘You Get Your Hindsight’ applies a dual shout to a crashy rhythm that could be written off as a fairly predictable Dodge thrasher, but closer inspection to the production and mix presents something a little grimier, almost; something with an uncompromising, filthy core that adds yet another slight variant to the band’s arsenal of noise.

The huge bass sound cutting through the intro to ‘Vampires Are Closer To Me Than You’ initially teases with a mood that suggests that someone had been listening to the Josh Homme dominated Arctic Monkeys album ‘Humbug’, such is the heavyweight sound. After a few bars and the inroduction of a fine drum part, more of a typical Dodge sound covers everything with a great confidence. It’s by no means a quick rehash of the past, or even a reworking of anything else found directly on this release. In stretching out again, the duo adopt a groove laden stance that’s much bigger, and a call and response vocal gives a simple sledgehammer of noise a brilliantly catchy hook. Elsewhere, there’s a couple of tracks where James and Ren go about things with a business like approach: ‘Dirty City Cowards’, in particular, sounds like a relatively safe and natural successor to ‘Karen’ with a riff that intercuts the bottom end fuzz with an almost bloopy sound, whilst Ren’s shoutiest vocal revisits a couple of key moments from the ‘…Future…’ EP; ‘Original Pioneers of Justice’ sounds a lot like a ‘Buzzkill’ outtake, and ‘Get To The Yacht’ offers a barrage of drums and shouting that extends on tracks like ‘Art of A Good Put Down’, cementing the Dodge lo-fi sound as one that’s got plenty of legs despite a straight and simple core. You could never label any of these as bad – they’re great, and certainly help to pad out an impressively growing catalogue – but they don’t necessarily reach their full potential as part of this bigger sounding recording. Any feelings of being on autopilot are quickly counterbalanced by the the superb ‘Holy Moses’ which appears to rework the riff from Zeppelin’s ‘Immigrant Song’ in the mould of ‘My War’ era Black Flag, showcasing James’s best playing throughout. His deep, four stringed grumble gives the piece a massive heart throughout and Ren’s aggressive drumming is especially on point. In just over a minute and a half, this raises the bar for what two men on a limited budget can achieve, and it definitely deserves to bring them new fans.

Cranking through ten tracks in under fifteen minutes, ‘Not Our Fault’ pretty much instantly stakes a place as vintage Dodge. Some of the songs aren’t as instant as previous works, but they show an all round sonic improvement. The aggression here is every bit as intense as the best bits of 2020’s ‘Buzzkill’ “long player”, but with the broader dimension that a better bass sound brings, GTFOD take some big steps towards recording that modern garage punk classic they’re obviously capable of delivering.