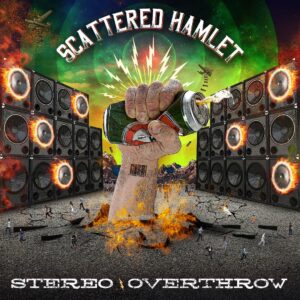 Formed in 2010, Scattered Hamlet are a band who combine the old style southern rock riffs heaviness of stoner, and more than occasionally, are keen to attack with the force of Motorhead’s hard edged, mid-tempo tracks. Wavering between elements of Black Label Society and no nonsense rock ‘n’ roll, whilst often sounding like they could drop into ‘Killed By Death’ at any moment, you could certainly say that, in terms of a hard driving outfit, they’ve got most bases covered.

A timely follow up to their 2020 EP ‘Wishing Well’ (which pitched a few self-penned bangers against a punchy cover of Twisted Sister’s ‘Stay Hungry’), their 2021 release is pretty much everything you’ve come to expect from a Scattered Hamlet record…and more. The title track kicks things off not so much with a massive rocker, but a huge statement of intent. Barely a note has emerged from the speakers before frontman Adam Joad informs everyone that “the boys are back and they’re ready to go”, and with that, the rest of the band tear through an old school rock ‘n’ roll riff, blending the guts of classic AC/DC with the southern attitude of HellYeah. This fusion of styles certainly isn’t new, but the kick up the arse given to the riffs is more than enough to make it all feel exciting again. The guitars are grubby; the drawled vocals grubbier still, and regardless of a couple of lyrical clichés, there’s plenty here within this three minute slab of rock – as over-familiar as its constituent elements may well be – to make sure you’re paying attention. As an opener – and album primer – it’s brilliant. It doesn’t take itself too seriously, all the while sounding like a force of nature, and Sean Sheppard’s lead guitar sound adds a really intensive edge ensuring this cannot be ignored. Released as a single ahead of the album, ‘All Talk’ finds Joad pitching his best southern style against more riff oriented noise where drummer Grant Jenkins locks everything down with a heavy stomp. Joad and Sheppard fill plenty of space throughout with their two-pronged guitar attack, and although the rhythm guitar work is especially chunky, Sheppard’s howling leads bring enough of a strong melody to give everything the required balance. It’s particularly impressive how he appears to channel both Angus Young and Slash simultaneously for his featured solo, providing a huge musical highlight, but if anything leaves an impression, it’s the simple shout-along chorus that sounds very much like it was written with live performances in mind. Simply put, if you’ve liked anything from the Scattered Hamlet catalogue so far, this is catchy enough to become an instant hit.

Another genuine standout, ‘Lowdown’ tempers the heavier edges with some furious slide guitar work and a brilliant blues harmonica. The dirty southern edges make it unmistakably the work of the Hamlet, but in terms of groove and punch, older listeners will certainly get welcome flashbacks to Aussie legends Rose Tattoo throughout. Quickly grabbing hold of the stomping groove and running with it, this track represents Hamlet on full power, despite a more melodic streak. A call and response vocal on the chorus will make the listener think that’ll be the track’s musical pinnacle, but just as soon as that makes its presence felt on the second go round, the band switches to a slightly quieter interlude for a burst of swamp rock (complete with a jaws-harp accompaniment) before switching everything again for a couple of blistering solos and heavier breakdown. By the time the final verse and chorus sets everything back on track, those previous deviations seem so natural that you almost forget about them. Also by bringing the main hook back for one final blast, it leaves the listener with something of an earworm, and proof that these guys – as simple as their big shout-along hooks might seem on the surface – certainly know a thing or three about effective arrangements.

Despite flaunting one of the US’s pro-gun slogans, ‘Don’t Tread On Me’ is a great number that’s more complex than first impressions suggest. Joad takes busy vocal bits from the young Steven Tyler, gives them a southern twist and works them in tandem with a semi-funky riff that sounds nothing like the rest of the album. That said, a world of shouty gang vocals on the chorus sets everything straight, and a little more sharp edged guitar work ensures this is a very confident sidestep. In addition, its macho lyric makes for an obvious bedfellow with the massively sloganistic ‘Death or Dishonor’ which, although not the album’s best four minutes, still boasts some solid playing throughout, and another growling vocal that commands a genuine presence. ‘The Creek Don’t Rise’, meanwhile, fleshes everything out a little further with some decent swaggering rock that calls back to the pre-grunge early 90s, and although it’s in danger of being overlooked due to a few of this album’s songs being so much more in your face, a few plays helps to uncover a few interesting guitar tones and another great solo which starts with an obviously metal bent before shifting into enormous bluesy tones that show Sheppard’s talents off in a really natural way.

In another change of mood, ‘Low Class Blues’ introduces howling blues guitar leads against a heavy, stomping groove. A dual vocal makes the band sound even more intense than usual, even though the music seems keen to work with a more melodic core. It doesn’t necessarily stretch the boundaries as far as ‘Don’t Tread On Me’, but it definitely suggests Scattered Hamlet aren’t a band that are ever likely to be stuck in a rut. This feeling of adventure is further shown during ‘Rattlesnake’, when the lads scale things back to work a much sleazier sound with the drums out front and centre. Sure, the chunky elements will be enough to thrill their longer term fans, but the overall swagger feels very different in places. The trashier sound isn’t as sympathetic to the vocal, but from a musical standpoint it’s decent enough, with a chugging backdrop and another smart, very old school solo helping everything to stand firm.

On ‘Stereo Overthrow’s ten cuts, Scattered Hamlet’s self-proclaimed “honky-tonk metal” doesn’t just rock – it truly rips, unapologetically at times, with an unquestionable force and attitude. The lyrics may not always venture too far out of old rock clichés, but that really doesn’t matter. In filling a gap between the blues/swamp/groove elements of Clutch and a good time party band with an 80s heart, Scattered Hamlet almost feel like a one of a kind experience, and there’s more than enough enjoyment to be had here. Certainly enough for you to question why they’re not much bigger…