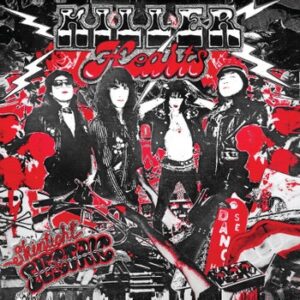 In many ways, it suggested that, somewhere down the track. Killer Hearts could serve up a cracking full length album. …But what if their earlier brilliance was enhanced by the EP format providing a quick adrenalin hit? Well, there are no such worries here. This ten song collection almost feels like a musical drive-by, with the noise hitting hard and fast – in and out in under half an hour, with the riffs coming through aggressively enough to make even the most jaded genre fan sit up and take notice.

The album opener ‘Get Some’, is archetypal Killer Hearts. Its two minutes overflow with edgy rock ‘n’ roll riffs, with the band channelling the sounds of Supersuckers at their speed driven best. The relentless rhythm is augmented by smartly played, shrill leads – sharp enough to be very musical, but with a carefree edge befitting of the style in hand, to give the feeling of a careening, unstoppable musical force. With the punkiness underscored by a rattling bass, the Hearts quickly set a great style in place and if the music doesn’t grab you, the repetitive hook – very much designed for group oriented shout-alongs – certainly will. Moving further into punk territory ‘Strange Heathen’ is absolutely loaded with muted chords delivered at top speed, making Killer Hearts sound like a more polished Dead Boys, whilst a chorus hammers home the kind of call and response vocal that accentuates the band’s 70s trashiness, A riff dropping in a couple of sharp stops suggests a love for the Ramones’ debut – as is only right – and a high octane lead guitar break with a metal-oriented fretboard slide at the close more than hints at the kind of musicianship that could run rings around most garage punks. Eventually tailing off with a repetitive refrain where a vocal sneer isn’t shy in sharing its ingratitude (the impeccably delivered “thanks for nuthin’” supplies something of an unlikely earworm) this number quickly offers itself as an album standout. Simply put, this is great garage punk that’s not to be missed. Cranking the riffs up a notch further, the expletive driven ‘Good Time Motherfucker’ falls somewhere between a Dead Boys classic and the street trash sleaze of Indonesian Junk’s 2021 release ‘Living In A Nightmare’. In terms of punk ‘n’ roll riffs taken at speed, it’s perfectly executed, not even slowing down to accommodate an aggressive lead guitar break or the tempering anything to fit more naturally with some unexpected backing vocals. You can almost imagine the sweat dripping from the walls as guitarist Brandon Barger tears up his fretboard and the accompanying rock ‘n’ roll piano stabs whip up a frenzy deserving of an old Stooges jam. Again, a great performance trumps any originality, and Killer Hearts stand a great chance of winning over most garage punk fans with such intensity.

‘Dynamite Tramp’ doesn’t bring much new excitement, but between a solid riff and a punchy quality that sounds like David Johansson channelling the best bits of New Bomb Turks, it has more than enough retro charm, cementing this band’s appeal and suggesting they’re already able to take on some of the genre’s best, whilst ‘Dead End Kid Forever’ cranks the bass throughout, offering a straight up punky banger that should appeal to fans of the equally brilliant Electric Frankenstein. The energetic vocal has no real finesse; words are slurred to the point where they just about scan, but aided by an absolutely killer drum part and a dominant guitar solo that showcases Brandon’s love for some classic CBGB’s sounds, it more than hits the spot. Those looking for even more of a retro sound should head straight for ‘Scream & Shout’, mixing a punky edge with a high energy harmonica tipping the hat to a much older set of influences. By turning up the distortion on the lead guitars, it suggests that a lot of time has been spent listening to The Stooges, but this is by no means an obvious knock off. For fans of the style, all of the ingredients will be hugely familiar from the get go, but what’s clear is that Killer Hearts recycle everything with love, and more energy than anyone. As with the best bits of the LP, it could be the greatest thing since The Hives broke through twenty years earlier.

‘Do Your Thing’ and ‘Backstreet Lucifer’ are reprised from the EP. Although they’ve not been re-recorded, the mixes presented here certainly sound a little clearer; although that might just be speculation, as they seem to take on a bigger confidence too when heard as part of a broader work. What is clear, though, is that the passing of time hasn’t diminished any of their DIY grubbiness. ‘Lucifer’ is a casual reminder of Killer Hearts’ harder musical chops with its taut bass and Supersuckers-esque thrashing, but ‘Do Your Thing’ should be considered one of the key numbers within the band’s early catalogue. With the kind of unhinged vocals that Howlin’ Pelle Almkvist brought to the masses, a raucous rock n roll solo, occasional atonal sax calling to X Ray Spex fans and a jubilant backing vocal that sounds like a street gang hankering for attention, it’s one of the greatest garage punk hits this side of Goldie Dawn’s equally trashy ‘Gone With The Wild’. With ‘Action 247’ showing off some deep bass grooves and fuzzier vocals against the usual rollocking piano sounds, Killer Hearts take a sidestep into more of a contemporary garage rock sound, but it suggests a band who aren’t keen to be stuck in a rut. It’s all very commendable, but not quite as exciting as the set closer, ‘Buried In Leather’, a tune that wastes no time in flaunting more of that ugly Dead Boys love via a speed-oriented groove and a world of distortion, reminiscent of overlooked Scandinavian band The Nightmen. Granted, its mix of punk ‘n’ roll and garage sleaziness isn’t so different from the bulk of what’s gone before, but its delivery is so intense; it’s pretty much the perfect snapshot of everything this band sets out to achieve.

Although this album plays firmly to garage punk traditions and never really seeks to push boundaries, it’s no less exciting for that. Most of the songs are brilliantly played, and when all ten tracks are spun one after the other in quick succession, Killer Hearts sound so tightly wound you almost feel as if they could burst. That energy and tension really rubs off, resulting in the kind of record that deserves to be filed alongside Indonesian Junk’s ‘Living In A Nightmare’ and The Hives’ ‘Veni Vidi Vicious’. During a turbulent year when music has been a welcome distraction from the world at large, this return from Killer Hearts is definitely one of ’21’s highlights.