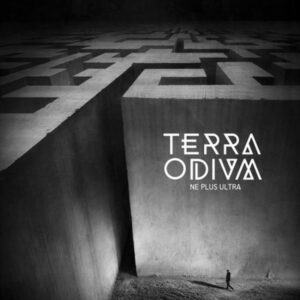 The heaviest track, ‘The Shadow Lung’ kicks off with a fantastic downtuned riff that almost collapses under its own weight, with guitarists Bollie Fredriksen and Øyvind Hægeland battling it out for several minutes, while drummer Asgier Mickleson contributes a technically brilliant rhythm throughout, accentuating the arrangements jagged edges. When hearing Terra Odium at their absolute heaviest in this way, it’s hard not to be impressed – at least briefly – but everything falls apart once Øyvind starts to sing. Faced with a riff that would suit a melodic death growl, or perhaps a My Dying Bride-esque gothic darkness, he opts for something that sounds like Bruce Dickinson being tortured in an actual iron maiden. Most of the first couple of minutes are spoilt by his tuneless wailing, and with the band then shifting into a more intense arrangement, he lets out a deafening shriek that’s actually embarrassing. From there, the number struggles to recover and with Øyvind screeching against a relentless barrage of riffs that appear to get more pneumatic while a low budget string section bolsters the insane bombast, it’s all too much like hard work. The fact that the most interesting bits of this number represent some of the best music on this album is massively worrying, to say the least.

‘Crawling’ spends almost seven minutes approximating a Symphony X rip-off. Granted, it’s well played: the twin guitars are tight and really dirty and Steve Di Georgio’s bass brings a weighty bottom end, but compared to Symphony X themselves, it all seems rather messy. The orchestral stings should be effective, but instead, come across as distracting as they pierce through the wall of guitars, while the vocals dart in and out of the riffs in an unsure manner. Although Øyvind sounds better when keeping to a lower key, he never seems like a natural fit with the music itself. That said, there’s something here that should appeal to an undemanding prog metal fan…at least until the band reach the middle section. Unfortunately, at that point, everything just goes to pot. With an increase in heaviness comes an increase in Øyvind, and he screams incessantly, as if trapped in his self-made musical nightmare. Thankfully, an instrumental break full of downtuned riffery restores a little balance, but it’s hard to escape the feeling that Terra Odium have tried too hard to create something so complex, they’ve forgotten to write an actual song. ‘The Road Not Taken’, meanwhile, is absolutely terrible. Casting aside most of the dirtier sound for something very 80s, this trots out several second rate riffs against strings that sound synthesized. Obviously, Øyvind is in his element, getting to channel Dickinson as well as the more extreme output of Geoff Tate and other 80s wailers, but all too often, he simply cannot match those he strives to immitate. He even makes the ugly noise that often emerges from Dream Theater’s James LaBrie sound like the acme of vocal perfection. Adding insult to injury, most of his chosen melodies – and that word should be used loosely – take on an unnecessary pirate-y bent. Valuing bombast over everything, this feels like a painfully long seven minutes and should be avoided.

The opening of ‘Winter’ thankfully brings something of a highlight when the riffs hint at a love for some of the more technical thrash bands. A dual lead guitar break shredding atop a superb, ominously dark riff offers a brief glimpse into Terra Odium at their very best. It’s moments such as this – few though they are – that suggest this band does harbour some good ideas deep down and are capable of bringing great metal to the masses, but something is often lost in translation. ..;.And true to form, within a couple of minutes, the flash of inspiration gives way to a mire of relative ugliness. Interestingly, the band do not choose to bludgeon everyone with a riff-based sledgehammer here; instead, they offer twisted quasi melodies via a brilliantly played bassline and an alarming disquiet. It would work in the hands of someone with a frontman who could channel the atmospheres required but, unfortunately, Øyvind’s sub-par Bruce Bruce is a complete mismatch. To add insult to injury, he’s left holding the melodic reins for what feels like an uncomfortably long time, before being rescued by a great riff on loan from the Testament back catalogue topped with some brilliant twin lead work. Again, from an instrumental perspective, this is superb – it’s a much needed, if brief, slab of entertainment. Even if it’s never enough to rescue the entire track, it gives another brief exposure of some potentially fine musicians. At this point, unless you’re very forgiving of prog metal in general, though, you’ll certainly find yourself wishing that Mickleson and Fredriksen will eventually surface in a much better band.

‘It Was Not Death’, meanwhile, opens with a few quiet atmospherics, a bit of tuneless clanking and a spooky noise, before a semi-acoustic riff straight from Sepultura’s ‘Beneath The Remains’ stokes up the unease. Adopting a deeper tone, the vocals rarely sound like anything better than a karaoke Bruce Dickinson, but by keeping the volume under restraint (at least for a while) they are actually the best on the album by some distance. After four minutes, the track has more than set a mood, but failed to offer anything more. By six minutes in, it’s still meandering in a similar manner, save for the addition of a few Scorpions derived whistles. Christ, it’s…boring. Finally, a heavy riff cranks up and fills the last minute, but by that point, most of the audience will have given up. A lengthy epic,‘The Thorn’ brings a pleasing, downtuned riff – again very much on loan from Symphony X – peppered with horsey squeals, but it’s utterly relentless grinding barely shifts from its original melody, eventually making even a great sound seem overwrought and dull. It isn’t until the featured lead break rises with some great twin lead work and a very eastern melody that things pick up, but even then, any musical brightness is all too brief before everyone drops back into the main riff. As before, that riff sounds great for about a minute, but eventually sounds like the ultimate in musical drudgery. In closing, ‘The Clouded Morning’ sometimes suggests something far more interesting via the juxtoposition of sweeping orchestras and really fast rhythmic clanking, and there are interludes throughout where the combination of strings and really heavy riffs suggest the cinematic, but in all honesty there’s seldom anything you wouldn’t find on other (far more enjoyable) prog metal albums. The high point comes from a loud solo where the guitarists obviously channel Dave Murray and Adrian Smith, and a freaky carny inspired keyboard solo does a good job in maintaining the overall unease. The first three minutes more than suggest the work of talented musicians but by the time the track reaches its second half, everyone reverts to stomping and grinding to the point where it’s all little more than a heavy old dirge…while Øyvind, true to form, sounds like a man trapped in 1987.

The record label insists that if you’re a fan of Death or Dream Theater, you’ll love this album. Don’t be fooled by such an oddly broad claim: Terra Odium make Dream Theater sound like masters of easy melodies and Øyvind, in particular, makes the hopelessly tone deaf James LaBrie sound as gifted as Chris Cornell by comparison. They also have only a few of Death’s technical aspects and none of the speed. The rhythm section is often superb and there’s some top notch lead work, but with a lack of obvious songs and a complete non-singer, that doesn’t always count for much. Even approached a couple of tracks at a time, this record has the ability to drain all human spirit. Unless you’re an obsessive prog metal fan who values volume and sheer force above absolutely everything, this is definitely an album to avoid.