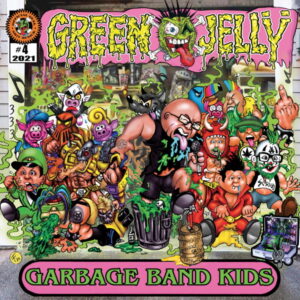 Another album ‘333’ followed in 1994 to casual indifference, but it would take fifteen years for the band’s fourth full-length ‘Musick To Insult Your Intelligence By’ to appear and instanrly begin gathering dust on record shop shelves. Never knowing when to give up, the band got back together in 2009, released another undersold album and then took another ten year holiday before creeping back out into the wild during the 2020 pandemic.

Their 2021 album, ‘Garbage Band Kids’ is childish, relatively tuneless and often hopelessly misjudged. The hard sell comes from a roll call of guests including members of Suicidal Tendencies, Kittie and Fishbone, but when the long past his best – and desperately unfunny – Weird Al Yankovic is potentially the biggest star, there’s not much to be excited about. Apparently, the material was created by over a hundred songwriters – including various fans – but, again, those huge numbers count for nothing if the material is as unfortunate as some of it more than happens to be. Green Jellÿ obviously failed to notice that when Tommy Lee asked fans to write the lyrics for the second Methods of Mayhem album, that resulted in a colossal car crash. Maybe he didn’t care. Either way, the bulk of ‘Garbage Band Kids’ is…utter garbage.

The opening track ‘Pukebox’ begins well enough with a punky drum part and rattling bass, before an average guitar chug quickly offsets any potential melody. Things descend from average to flat out awful once Bill Manspeaker opens his mouth to unleash the kind of shouty vocal that makes Andrew WK seem like the very acme of Todd Rundgren level talents, and his championing of ‘partying all day and all night’ just seems a little sad. A chorus that brings in the shouty refrain of “pukebox, pukebox, we hate you” has a vague merit purely by virtue of sheer repetitiveness, but scratch even the slightest bit beneath the surface, and it’s all incredibly empty and pointless. On the plus side, a sharp lead guitar brings in some early 90s style metal thrills (even if it isn’t enough to save face) and Manspeaker openly challenging Yankovic to “a parody smackdown” is genuinely funny, especially so when you consider these are two grown men long past their prime and not thirteen year olds amid a “my dad’s bigger than yours” spat.

From then on, most of the album aims even lower. Not content with having received a cease and desist from the makers of Jello for copyright infringement, ‘Silence of The Squarepants’ openly goads Nickolodeon with a thrash metal tune featuring their under-sea cartoon hero Spongebob. Manspeaker shouts and growls like a drunken man-baby while the rest of the band hammer through something that sounds like a mangled concoction of bad Suicidal Tendencies and Overkill, culminating with a guitar solo that sounds like it was ripped from an old Dictators record. Despite a couple of sharper musical moments, this is actually embarrassing. It’s hard not to feel sad for a grown man who thinks the world either wants or needs to hear this. ‘Fuck It’ offers a decent drum part and some solid but bog-standard rapping, but an empty and repetitive, expletive filled chorus comes across as lazy, making this sound like the worst bits of later (Hed)PE and something Mike Muir would have chucked in the bin during the sessions for Suicidal Tendencies’ ‘Suicidal For Life’. ‘Beat My Meat’, meanwhile, features a grown man singing about being a butcher via a bunch of innuendo driven lyrics while sounding like he’s being sick into an empty dustbin. It’s the kind of recording that’s so phenomenally awful it can’t even be saved by a few riffs aiming to add a retro cool by hatking to cult thrashers like D.R.I. This really is the sound of musicians absolutely embarrassing themselves.

‘Drinking Song’ marries lazy pirate metal homage with a bunch of kazoos. Across three minutes, a hackneyed old melody is put through its paces while Manspeaker and his mates yell with abandon and it honestly is every bit as bad as you think it will be. Seemingly a little better, ‘Hey Hey Hey’ works a fat bass line and swaggering riff, resulting in something that sounds like a badly played Suicidal Tendencies ‘Send Me Your Money’, and by trying less hard to be amusing, it actually works better, but empty song writing soon leads to it feeling like a fairly hollow experience. At least it gives the feeling that the assembled goons backing Manspeaker on this occasion can actually play, something that more than comes through on ‘Champion’ – easily the record’s highlight by default – when a wall of fuzzy guitars and alternative 90s groove occasionally hints at a love for Swervedriver, before a rattling drum part and choppy guitars descent into some half-decent funk metal sounds. It’s the kind of arrangement crying out for a much better song at all times, though, and the ugly vocal really doesn’t help. After the second listen, it still feels like precious listening time has been wasted.

Despite these marked improvements, any enjoyment proves fleeting as, elsewhere, Green Jellÿ’s stock in trade reverts to being seldom more than empty, cheap and juvenile noises.‘Freeto Feet’, featuring weird horror themed spoken word bits set against more laboured chugging and retching vocal sounds all too often feels like pointless filler and ‘Back Street Dentist’, despite a really distorted bass bringing some brilliant low frequency grooves, never escalates beyond sounding like a quick Diesel Queens meets Butt Trumpet rip off, and even in terms of shock value, its lyrics really can’t challenge the latter, choosing instead to reinforce the “blood and snot” angle, as if angling for the audience of perpetual fourteen year olds who might – might – find some goodwill for a Green Jellÿ comeback. As if ‘Garbage Band Kids’ wasn’t full of filler already, re-recorded versions of ‘333’ and signature piece ‘Three Little Pigs’ make up the distressingly long playing time. Reagrding the re-recorded ‘Pigs’, there’s little to no point in it existing. The arrangement mirrors the 1993 album version, merely recycled in a slightly chunkier fashion, coupled with a vocal that sounds a fair bit deeper. The “ganga” reference from the earlier 1992 recording is reinstated, but no attempt at updating the lyrics has been made. In the hands of a smarter band, this would have provided an ideal opportunity to shoehorn in a more contemporary angle for social commentary or satire, but Green Jellÿ are very clearly happy to cash in on their thirty seconds of fame in the hope that it somehow makes this album a more saleable commodity.

When two of the album’s three (vaguely) redeemable features are its artwork (courtesy of one of the original Garbage Pail Kids creators) and a re-recorded ‘Three Little Pigs’, you know you’re in trouble. Then again, this was hardly likely to be a world beater in terms of musical comedy, retro thrills, enjoyable metal, or any combination of the three. Since the band’s original fans will all have been pushing 50 at the time of this release, the chances of anyone being excited by a Green Jellÿ comeback were slim to none. Once you factor in that a new generation of metallers were hardly likely to either know or care who the Garbage Pail Kids were, or be vaguely interested in late-middle aged musicians attempting to be amusing, this album feels…rather pointless to say the least. To add insult to injury, it can’t even claim to be useful by being a digital only affair, and on the basis of most of the material here there are a lot of CDs eventually on their way to landfill, so after wasting your time and offending your ears Green Jellÿ could even be helping to wreck the planet, making ‘Garbage Band Kids’ the ultimate in waste.