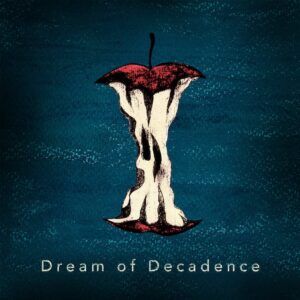 Slave Steel’s independently released debut LP ‘Entanglement’ came with a brilliant riff heavy sound that introduced the band with a great confidence. A few of the vocals were a little scratchy in places, but the material had the kind of strength and confidence you’d expect from a band with far more years behind them. As if realising there was a little room for improvement, the band took three of the album’s songs and re-recorded with superior vocal takes for a self-titled EP in 2017. This proved to be a good move, taking a much bigger step towards capturing that perfect sound.

Much like the material chosen for the self-titled release, the four tracks that make up Slave Steel’s 2021 release ‘Dream of Decadence’ have origins that date further back. ‘Ogre Cage’ was first released in video form in 2019 – at a time when the world hadn’t been derailed by the Covid-19 pandemic – and the remaining songs were issued sporadically throughout the following year. Although the material been circulating for some time, the opportunity to hear it properly sequenced and in one place really lends everything a welcome extra punch.

The lead track ‘Ogre Cage’ wastes no time in introducing the band’s talent for a riff when it leads the charge with a heavy sound that borrows heavily from early 90s thrash, tempered by a more modern borrom end. Almost in an instant, the music sets itself in place as a brilliant hybrid of classic Testament, ‘Arise’ era Sepultura and ‘Sacrament’ era Lamb of God. A deep growling vocal owes more to the most extreme end of Pantera and a touch of Cavalera Conspiracy, but the elements combined srill sound inspiring and fresh, despite being an amalgam of some very obvious influences. By the middle of the first verse, with frontman Pil Nazzari in full on growl and bassist Marco Agosta lending some excellent extra weight, everything sounds so much more confident than before. A second black metal infused rasp gives an extra dimension to the chorus but this aspect of Slave Steel’s sound is definitely played down in comparison to their earlier work. It’s a good move which has the effect of making this a little more accessible. By the track’s end, you won’t necessarily have latched onto any vocal hooks – while the performance is stellar, any lyrics are made semi-impenetrable via an extreme delivery and slight accent – but you’ll certainly come away loving the riff. In a place where the riff dominates to the point of becoming all, this is an absolutely first rate performance.

Having set the tone, the rest of the EP really doesn’t let up. The title track kicks off with an absolutely stellar riff that resembles Pantera’s ‘Primal Concrete Sledge’ played in a slower, heavier manner. As a showcase for Daniele Manganaro’s preferred downtune, it is brilliant; as a pre-amble for even heavier sounds, it’s incredibly effective. Gaining speed, Riccardo Priori reaches for the bass drum pedals and injects the rising groove with a couple of death metal pneumatics before everything settles into a very Lamb of God-esque musical assault. Between a superb riff, a vocal that taps into an aggressive perfection and even more fantastic bass drum/tom interplay, it’s a top drawer metal workout. A lengthy lead break full of long vibrato fuelled notes pushing Manganaro into the spotlight adds more of a melodic edge, but never takes too much from the all-round heaviness. It’s really impressive how each band member gets more than enough time to shine despite the track only clocking in at four minutes. Back in the early 90s, there were thrash and technical death metal bands who failed to achieve anywhere near as much in double the time. ‘Blessed Is This Mess’ fuses the expected groove oriented sound with a couple of hardcore breakdowns, and with a couple of higher register guitar fills piercing the sludgier backdrop, there’s more than a hint of early Machine Head at play. Slave Steel take this in their stride with Manganaro playing up a storm, while the throaty vocals accentuate a rising anger throughout. Of particular note is a brief interlude where the main riff subsides to reveal a few bars where tech metal and djent influences shake things up, but never quite enough to sound forced or distracting in any way. Pulling into a huge finish, the track shifts one last time, toughening up the main groove and adding a choir of voices for extra bombast. It may not be as melodic (relatively speaking) as a couple of other tunes here, but in presenting a riff and cementing the band’s commitment to heaviness it does a fine job, giving potential fans a lot to enjoy.

Stretching out to over six minutes, ‘Shut’ peppers the groove metal sound with flourishes of prog metal melodicism, but in the main, holds firm with a jagged Lamb of God oriented anger. The tough pneumatics delivered by the rhythm section are superb throughout, with Agosta’s four strings often lending a very audible rattle. Although the first three minutes centres around the push and pull of those pneumatics and an occasional riff that sings out with an eastern flavour, its repetitive style never becomes dull. In fact, the band’s insistence on clinging onto the riff for a little longer than expected makes a dramatic shift into a faster, thrash inflected second half feel all the more powerful. When opting for a greater speed, the whole band sounds as impressive as many of the thrash legends, but with Nazarri injecting a few darker tones via a brilliant vocal, it never sounds dated, or like a band just wallowing in nostalgia.

These four tracks are certainly Slave Steel’s finest recordings to date. The compositions are tight and the production sound runs rings around their debut. For fans of the more melodic end of extreme metal and straight up groove metal with a classic Lamb of God and Bless The Dead core sound, it’s a release that’s almost guaranteed to push the right buttons. With a barrage of classic riffs in the hands of a band who seem unafraid to take them into even heavier places than before, this EP is very much worth investigating.