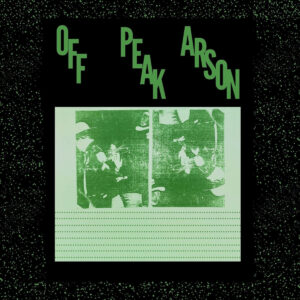 Off Peak Arson is a new band for 2021, but garage punk/noise rock fans will certainly recognise a couple of the musicians involved. Tyler Harrington (vox/bass) has previous connections with The Wirms along with OPA guitarist Skyler Gambert, as well as being a member of the insane Musclegoose. For this project, they’ve collaborated with drummer Devan Theos and guitarist Matt Thornton, both of whom are members of Ten High, and between them, they make a ferociously brilliant noise.

The lead track ‘Garbagehead’ kicks in with a real intent as Devan’s drums whip up a storm with an almost tribal mood, while the twin guitars conjure all manner of distorted shapes. The first part of the vocal channels the finest of the original Riot Grrrl movement, before everything branches out into an interlude where bendy lead guitars mix elements of the early, raw Flaming Lips with call backs to The Wirms. Dropping into a slightly punkier chorus, the band reaches for maximum noise, but those paying close attention will note that Skylar is still keeping one ear on the artier side of things, as he and Matt colour the wall of sound with various dive bomb sounds and other effects.
Finally slowing down for a few bars, a massive riff crashes in; the way this draws from both garage rock and late 60s blues rock traditions lends a burst of melody, before the band slowly gears back up for a rattling groove that accentuates their garage roots. It’s something of a kitchen sink affair, but in terms of introducing old friends in a brand new scenario, this number does a fantastic job.

In a change of mood, ‘In Perpetuity’ opts for a mid tempo groove driven by Tyler’s bass. His playing has a pleasingly fat sound and he continues to have a great presence even when overlaid by layers of echoing noise and guitar delay. The addition of Devan’s ethereal vocal almost gives this piece a different melodic slant, but in terms of re-awakening some retro 90s vibes and complimenting the fuzz rock grooves, it sounds great, despite the layer of distortion rendering the lyric almost inaudible. As the band works their way through this number, its solid melody really gains traction: the bass continues to be something of a highlight, but there’s also plenty to enjoy within the heavily distorted guitar leads as they throw out shapes of noise that draw heavily from a post-punk past. The melodic yet spiky ‘Paranoid Hum’ carries undertones of Wire during a superb intro where Matt Thornton cranks an angular guitar riff against solid drums – clear proof that this is a band who can carry a great melody if they so choose to – before exploring a drum heavy verse where Devan and other band members work through loose harmonies behind more distorted sounds. A couple of listens in, and it’s very clear that Off Peak Arson have a superb rhythm section: Tyler drives the core of this tune with a hefty sound that appears to come very naturally, while Devan’s crashier approach dominating a brief – and much louder – chorus takes an influence directly from a swathe of fantastic US hardcore bands from the 80s. Everything combined, this results in a retro piece of noise rock that’s not to be missed.

‘Warm Satellite’ presents something with even more of a melody – occasionally hinting at older bands like Superchunk and Pavement – but a distorted vocal and heavy drum part still continues to provide an obvious link with the previous material. Where this track really excels, though, is during a slow and moody extended coda the twin guitars rise and chug their way through a vaguely hazy, vaguely grungy groove that could’ve been lifted from the Smashing Pumpkins debut album. Any recycling is done with pure love, of course, and this is actually the kind of track that sounds better with each listen, while ‘Disarrayed’ rounds everything out with a fast, straight up garage rocker. An intro teases with more 90s vibes, before the speed intensifies, the drums crash in with a real intent and a dual vocal shouts with abandon. A heavy and distorted mid section goes even deeper into No Wave traditions, with echoes of The Wirms, early Sonic Youth and the much missed Mad Doctors showing, yet again, the work of a band that sound genuinely exciting when cutting loose.

Five songs is just enough to really get the measure of this new band, but it still has the potential to leave fans of retro alternative sounds wanting more. This is a good thing in some ways; it certainly avoids the risk of anything sounding repetitive or stale, and ensures there is absolutely no filler here. Although the material sometimes sounds like the sum of some recycled influences, as a whole, this EP offers far more than recycled nostalgia. It showcases the musicians in a much broader fashion than their parent bands and that creates a debut that could be one of 2021’s best DIY releases. Highly recommended.