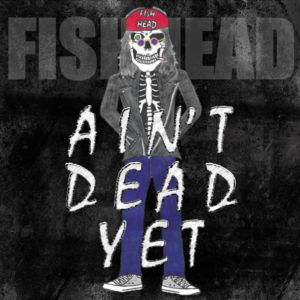 The unfortunately named Fish Head, a metal obsessed band from Royal Tunbridge Wells, care not for fashion. Like another Kent based band, Sacrilege, they seem perfectly happy to exist in a little bubble where metal stopped evolving somewhere around the late 80s. Unlike Sacrilege, though, their 2021 release ‘Ain’t Dead Yet’ actually includes a few decent songs and a lot of energy.

Recorded during a year of lockdown, the album’s production values leave much to be desired; the songs rarely rise above sounding like the roughest New Wave of British Heavy Metal discs from 1981 and half the lyrics might be culled from a bucket marked “favourite clichés” (in addition, the end mix means the finer points of some particularly unrefined lyrics aren’t clear). What Fish Head lack in finesse – and abilities to choose a decent band name – they make up for with truckloads of spirit, an obvious ability with a strong riff and a hell of a lot of chutzpah. Also, by throwing in several obvious and cheeky nods to their heroes, they give listeners the feeling that half of their output might just be delivered with a knowing wink. That, obviously, makes some difference with regard to how their best material should be perceived.

The title track gleefully throws out riff after riff sounding like Hanoi Rocks on speed, an approach that really pushes guitarist Jack Lyttle’s talents. The way the riffs come thick and fast conveys a real sense of urgency and there’s something about the brazenly lo-fi production values that actually adds to the rawness. The vocals seem less impressive; he shouts various lines at speed against something that like a super-charged AC/DC ‘Whole Lotta Rosie’, which leads to a feeling that although a sense of gusto is important here, very little care has been taken in terms of overall meter. The arrangement sounds as if it could fall apart, and yet despite almost everything, the track endures long enough to be lifted considerably by a great lead guitar break that has flourishes of Dave Murray’s work on Iron Maiden’s ‘Killers’ LP. Having set some half-decent metal in place, they appear to tear it all down in favour of a bluesy boogie for a middle section where Lyttle and his mate Russell Clear (bass/bv) indulge in a few bars of something carrying more of a groove, always pushing the rhythm section to the fore. With a stomping rhythm overlaid by heavily wah-ed guitars, it sounds like a piece of music that was written for something else and then – bam – the band pulls the chorus out for one last rousing blast, bringing everything full circle. It’s the kind of opening track that may not impress on first listen, but once you’ve heard it a few times – and obviously had time to adjust – it sort of sounds as if they’re on to something…

Adopting a much muddier sound, ‘Too Late’ applies Motorhead’s speed and grit to a recording that has Venom’s “recorded at the end of a corridor” style ugliness. Once you get past the demo-like fidelity, it’s another track with a few points of interest. Russell’s bass rattle carries so much weight here, but another aggressive lead suggests there’s some musical talent being shared with the world, even if the claustrophobic end mix rarely gives the material its full due. Moving through the aggressive NWOBHM inspired ‘Get Out’ – complete with massively sweary hook – Fish Head continue to value speed over almost everything else, but as before, once this is used to facilitate the kind of lead guitar breaks you loved from old Diamond Head records, the track seems to improve. By the time it’s all done and dusted, you might even find yourself wishing you could hear it in a more suitable clarity. That’s more than can be said for ‘Into The Fire’ – very much a low point – with its odd juxtaposition of 90s alternative rhythms and old school trashiness. Musically, it’s as if someone’s heard the Mind Funk debut and really misjudged it; vocally, it’s worse: Lyttle growls and wails through the four minutes valuing volume over everything, and by the time he’s repeated the title for the umpteenth time, it all feels like it’s been dragged out for far too long. Much better, the double whammy of ‘Against The Wall’ and ‘Set It Off’ provide the biggest highlights when the band try their hand at tunes that appear to be inspired by very early Saxon and Diamond Head respectively. The former doesn’t try to be clever in any way; it merely sets about driving a few great riffs into listeners’ skulls as if it’s the summer of ’81 – something Fish Head do very well when fully focused – and the latter, although not as sharp, has a few traits that call back to Brian Tatler and co – chiefly the crowd-friendly, shout-along hook and a couple of tasty leads. As long as you don’t expect anything as professional as ‘Wheels of Steel’ or ‘Lightning To The Nations’, these songs are the most likely to leave a lasting impression.

Aside from featuring a handful of decent old style metal workouts, this album also has an ability to disarm the listener via some far more blatant “borrowing”. In the middle of thrasher ‘See You In Hell’ you’ll discover some speed driven, David Ellefson-esque bass work backed several jagged riffs that sound as if they’ve been lifted straight from Megadeth’s ‘Peace Sells’ album; ‘Stand Alone’ brazenly rips off the early melodies from Guns N’ Roses’ ‘Civil War’, not only in terms of tune but also in clean guitar tones, right to the point you’d expect Waxl to pop up and warn us of “young men dying” at any second. Even more unexpectedly, the album’s sole ballad ‘Leaving You’ appears to be stitched together from bits of old Thin Lizzy and Whitesnake crooners. This has the welcome bonus of showcasing more finely played, clean toned guitar, but it’s all wasted once a husky vocal struggles to convey the necessary (and expected) levels of emotion. Finally, the subtle as house bricks ‘Fuck’ melds an expletive driven hook to a great riff – a riff so great, it’s a shame the band didn’t write it. It’s a dead ringer for Rose Tattoo’s ‘Nice Boys’, presumably acquired by Fish Head through an ongoing G N’R obsession rather than any genuine interest in the old, hoary Aussie rockers themselves.

This is not a classic album by any means, but then again, it was never designed to be. Sometimes, it isn’t even very good, and yet there’s something about it – at least fifty percent of the time – that suggests Fish Head are more than capable of delivering the goods. By somewhere around the fifth play, it’s likely that Fish Head’s schtick could start to wear thin for the more discerning listener, but for a few more obsessive, less demanding fans of old school metal, ‘Ain’t Dead Yet’ might just provide a welcome distraction from the world at large. Sometimes, that’s just what you need.