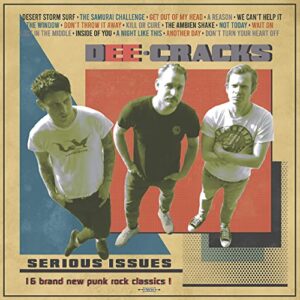 Over the years, Austrian punks DeeCRACKS have often been a reliable source for good, honest, ragged street punk. Following the release of their ‘Call It A Day’ EP in 2013, the band have gone from strength to strength, but with its combination of straight up punky riffs, nods to 60s surf rock and occasional flirtation with something more commercial, their 2021 release ‘Serious Issues’ is easily one of their best LPs to date. In sixteen songs and less than half an hour, the band’s love of speed and directness is often at the forefront, but sharper songwriting and a few melodic twists also give the album a varied approach ensuring it never becomes stuck in a rut, or worse, sounds like “just another punk/Ramonescore album”. In punk terms, ‘Serious Issues’ is a bit special.

Kicking off with the instrumental ‘Desert Storm Surf’, the album instantly throws a curveball and shows a band who know they’ve reached peak confidence. The lead guitars adopt a suitable 60s twang, but dressed with a slight garage punk fuzz, it helps create the kind of instrumental workout that never feels out of place on a punk disc, and by sliding straight into ‘The Samutai Challenge’ – a tune heavy on the drums and melodic hardcore crunch – the energy remains high, despite the mood changing rather dramatically. Taking on the mantle of a ragged pop punk, not far removed from Screeching Weasel and early No Use For A Name, DeeCRACKS show a flair for the taut and tough style. With Matt’s vocals always providing a familiar link to the band’s earlier work and a shouty refrain providing something of an instant hook, this is classic DeeCRACKS – and that’s before taking into account a cheeky lead guitar riff filling space along the way. Closing the trilogy of bangers used as opening bait, the band switches styles yet again and in chugging through some finely tuned, harmony driven punk that’s close to peak Down By Law – but tempered by the occasional Ramones lift – they show an easy knack for a straight melodic punk style.

Delivering straight up Ramonescore, ‘A Reason’ reverts to DeeCRACKS on autopilot in many ways, but the combo of jagged riffs and Matt in full on growl gives long-term fans something they’ll love in an instant, while the similar ‘Wait On’ could easily be an old Ramones cut from ’77, save for the throat rawing vocal performance. Neither track breaks new ground, but both help to lend this half hour journey some timeless pop punk charm. Taking an even poppier stance, ‘A Night Like This’ casts DeeCRACKS in the mould of pop punks who are obsessed with the old Phil Spector tinged 60s sound. This performance makes an even better stab of the style than The Queers did back in ’95, while ‘Don’t Throw It Away’, somewhat unexpectedly, sounds like a gruff twist on an early Sum 41 classic, complete with optimistic, sun-filled chorus hook. Given Matt’s Dicky Barrett-esquevocal style, this seems like a stretch for DeeCRACKS in many ways, but thanks to a combination of fine song writing and a ringing lead guitar, it becomes something an album highlight.

Almost as if to pander to the few fans who may feel the more commercial angle on parts of this record are a “sell out”, the poppier tunes are balanced out by a couple of hardcore inflected pieces. These are just as flawless. The thirty second blast of ‘Another Day’ sees the band throw themselves head first at a speed driven riff and come out winning, and the hard and fast ‘The Window’ showcases a fearsome bass rattle and forceful vocal that sounds like the most natural fit for Matt’s gravelly tones. For those looking for something a little closer to old style DeeCRACKS, ‘Lost In The Middle’ couples a repetitive hook with a superb hard edged riff, and the single release ‘Kill Or Cure’ is a sharp reminder – if one were necessary – of how tight the three piece band sounds when faced with the need to churn out riffs akin to the Ramones debut on steroids, always promoting a metal-edged rhythm guitar for that extra punch. With a simple hook and a duration that barely clocks a minute and a half, this is the ultimate exercise in proving a decent punk song can still thrive within a minimalist framework.

‘Serious Issues’ often plays like the ultimate overview of DeeCRACKS’ musical history, while simultaneously presenting a band who sound more than keen to move forward. Straddling a fine line between classic punky intensities and a commercial potential, there’s plenty here to enjoy from both a fan’s perspective and for the newcomer alike. In fact, it honestly wouldn’t be a stretch to suggest it could be one of 2021’s best punk records. Between several fantastic choruses, a few really melodic turns and a hefty dose of straight up Ramonescore, ‘Serious Issues’ has a bit of everything you’d want from a great punk disc…and more. Don’t miss it!