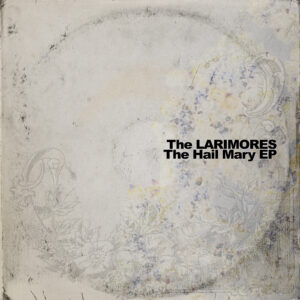 The end of the year saw another shake-up within Smith’s world when his friend, Great Affairs co-founder and long-time collaborator, Patrick Miller decided it was time to leave the band. A final blow to end a horrible year, maybe, but it gave Denny yet another opportunity to explore his options. Approaching the situation the best way he knew how and ever the workhorse, he embarked on a new project.

The Larimores teams Smith with another Nashville based fixture, singer songwriter Joshua Ketchmark. Those familiar with the scene will know Ketchmark from old; he released a couple of great EPs back in 2012 (‘The Bittersweet’ and ‘The Dreamers Disease’), one of which was produced by Smith, the other by Great Affairs man Kenny Wright. With those previous links, The Larimores doesn’t feel so much like a completely new project, but more of an opportunity for Smith stretch out with extended musical family.

Their four song EP ‘Hail Mary’ sounds like everything you’d expect, considering their combined talents. The toughest of its songs, ‘For The Record’ provides an instant stand-out by offering a barrage of ringing guitars across four minutes of wholesome roots rock. With Smith’s slightly gravelly voice complimented by a selection of thoughtful harmonies, it sounds in many ways like an old Billy Falcon tune you’d long forgotten, but there’s also so much about it that feels like an overspill from ‘Everybody Moves…’, despite Ketchmark occasionally dropping in with a smoother harmony vocal. With the vocals and guitars abetted by a tough rhythm section – which on this track includes drummer Criss Cheatham of August Christopher – the studio based project have all the necessary qualities to please fans of the style, whether or not they’ve followed any of the musicians previously. Another brilliant offering, ‘Beautiful & Tragic’ places Smith’s vocal against an arrangement that calls back to all of your favourite 90s rootsy pop, where traces of The Connells and Toad The Wet Sprocket mesh with bits of the more AOR-centric sound from the Jamie Walters debut. The chorus is fantastic, but digging deeper, the arrangement has a few lovely flourishes – especially its great lead break and a brief acoustic interlude where a couple of bars’ worth of muted notes accentuate The Larimores’ love of all things retro. There’s plenty about the arrangement and performance that sounds like business as usual for both Smith and Ketchmark, but when the end result is as good as this, where’s the sense in trying to be too clever?

A little more relaxed, ‘Thrift Store Heart’ offers some really bright sounding acoustic work set against a punchy bass (supplied by Dave Webb). The kind of track that needs a few plays to embed itself, its slightly confessional lyric and introspective sound is – in the band’s own words – an attempt at capturing something in the Paul Westerberg vein, and if the song writing doesn’t always convey that, there’s plenty within the musical arrangement that does. The natural production style, in particular, more than helps this sound like something directly inspired by Paul’s ‘14 Songs’ LP from ’93. With its best elements brought to life by that very understated production/mix, this is a great rock/pop performance. Taking a sidestep from the expected, the piano oriented ‘Over The Moon’ works something a little Beatle-esque, or perhaps something Lennon-ish, but derived through a Enuff Z’Nuff prism. Against a selection of clean chords, Smith’s slightly worn and weary voice has little to hide behind at first, but once the rest of the band chime in, the hazy 60s vibes suit him well, even if he’s soon outshone by the music itself, which shifts from a basic Lennon homage into a brilliant middle eight that’s straight from the Jeff Lynne catalogue and back again. With a few extra harmonies applied and the late arrival of a chiming guitar, this reaches a climax of sorts, but its magic always lies within its relative simplicity. Smith has more than hinted of a love of Enuff Z’Nuff in the past, but with the help of Ketchmark’s equally strong ear for pop and some strident piano work from multi-instrumentalist Stacy Hogan, he’s truly nailed his ultimate Chip & Donnie homage.

Despite the four songs exploring four slightly different moods, this EP hangs together brilliantly. This, of course, has a lot to do with both writers being dab-hands with a chorus or two and their abilities to call upon a network of great players within the Nashville scene. With Ketchmark’s influence helping Smith to embrace a lighter sound at times, and with other top notch session guys given almost as much exposure, ‘Hail Mary’ provides an excellent snapshot of these musicians’ combined talents. If you’ve followed Denny Smith’s career this far, you know you’ll want to add this to your digital collection (unfortunately, there are no plans for a physical disc), but if you’ve somehow not had the pleasure of hearing Smith or Ketchmark’s previous recordings, there’s still so much to enjoy here. Adult oriented pop-rock has rarely sounded so good.

Read a review of Denny Smith’s ‘From The Dark’ here.