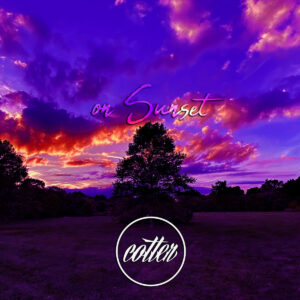 Ohio pop punkers Cotter use their debut EP ‘On Sunset’ to deliver a barrage of emotionally charged messages. Its title, agreed on by the whole band, ‘On Sunset’ refers directly to their formation on Sunset Drive, but also – in their own words – how “heartbreak occurred, [the band] started and something beautiful came at the end of from it.” For those who’d rather not get too immersed in the song’s personal messages, most of the songs are loaded with absolutely classic pop punk riffs. Whether they’re tackling the Sum 41-esque bounce of ‘Blackout!’ or the obviously Fall Out Boy derived ‘Clumsy’, their musical talents shine brightly.

This is immediately obvious once opener ‘Chicago Handshake’ hits its stride somewhere amid the first verse. Following a few ringing chords, a chunky riff springs up that takes the heart of 90s emo and squeezes it hard until every bit of influence powers an incredibly buoyant riff. Moving forward, vocalist Howard Mesharer displays a natural gift for a melody. His Patrick Stump-esque warble might not suit everyone but his delivery has a huge presence and, as a singer, he sounds like the perfect man for the job on a chorus that echoes classic Panic! At The Disco. A couple of plays marks this out as a genuinely feel good track and the way gang vocals lead into a refrain about loading up the car, dropping the seats down and hitting the road makes this feel truly anthemic.

Taking a chunkier stance, ‘Cigarettes & Razorblades’ stokes up the muted riffs, and finds Cotter at their most direct, lyrically speaking. When recounting a painful breakup through the imagery of self-harm scars, phrases like “I told myself I’d rather die than have another dream” and the abuse of “swings coming at my head / For the need to take control” could seem hopelessly bleak, but contrasted with a great tune, the song feels much more balanced. A buoyant and ringing guitar, a brilliant rhythmic punch and another really captivating vocal really take the edge off those unflinching lyrics and, more than ever here, those who crave melody above all else will be drawn towards the chorus. Throughout a great hook where the protagonist assures everyone he’s “worked shit out [and] doing fine” there’s a much needed positive vibe and more of those FOB-ish traits re-emerge. The lyrics might seem as if they’re the be all and end all here, but the arrangement is certainly strong enough for those who just love classic pop-punk to enjoy the performance at face value.

The most basic offering, ‘Blackout!’ happily recycles the kind of riffs that Sum 41 and Good Charlotte made their forte at the tail end of the 90s, but with the addition of some great, shouty chorus vocals and an especially noisy bass drum used extensively throughout, this never sounds like a direct lift. An unexpected shift into something heavier midway allows drummer Andrew Brzeckowski a chance to hammer his bass drum further and although things never stretch to a metalcore heaviness, you get the feeling that Cotter could really clear some cobwebs if they so desired. Shifting back into the main melody for one last rousing chorus, the band sound utterly jubilant – more than ready to put their dark past to bed forever. Obviously, this doesn’t reinvent the wheel in genre terms, but those looking for straight up, no nonsense pop punk, it’s a track that’s guaranteed to hit the spot. ‘Clumsy’, meanwhile, sets up a brilliant punk/emo crossover, kicking off with Zack Lukkarila weaving a smart lead guitar part through a chunky riff. His intricate lead work makes a strong feature throughout each of this song’s instrumental passages – an obvious musical highlight – but for most people, it’ll be the chorus that wins out. Taking their tried and tested Fall Out Boy love to extremes, the hook sounds like an unashamed emo anthem celebrating the awkwardness of love, delivered with some great gang vocals and the kind of soaring melody designed to uplift. Fans of various other pop punk bands will surely find it instantly familiar, but when everything is as well written and flawlessly played as it is here, the enthusiasm trumps originality at every turn. This has all the makings of a pop punk/emo classic.

Following four absolute belters, ‘Mind Your Head’ changes the mood. Bringing this EP to a mellow close, this heartfelt rock ballad could almost be the work of a different band. The extensive use of harmonies makes it sound a little “boy band” at first, but with the addition of a couple of extra guitar layers, things start to toughen up. As soaring lead guitars inspired by various late 80s big hair classics start to dominate, the cheese factor is high but the performance is lovely, especially since those notes compliment an especially emotive vocal. Topping a melody that screams “unrequited love”, Cotter take this opportunity to share a message that’s rather closer to “pointed anxiety”, but do so in their usual open and thoughtful way. It never feels heavy handed or uncomfortable; this is an easily relatable message, one that would either resonate with the teens and twenty somethings in their audience, or perhaps reawaken old memories for a few older listeners. Either way, once you’ve adjusted to the change in style, it’s a great song and one that shows Cotter are more broadly talented than your ten a penny identikit pop punks.

Although only five songs and merely a snapshot of Cotter’s musical wares, ‘On Sunset’ is one of 2020’s best pop-punk discs. The songs are eloquent and thoughtful; the vocals are incredibly strong and the riffs strike that perfect balance between crunchiness and pop-ish melodies. By working to a timeless blueprint, Cotter’s debut EP deserves a place in your collection, alongside Fall Out Boy’s ‘From Under The Cork Tree’ and Good Charlotte’s ‘The Young & The Hopeless’. Yes, it really is that good – and further proof that bands no longer need major label backing or huge budgets to create fantastic music. A highly recommended listen.