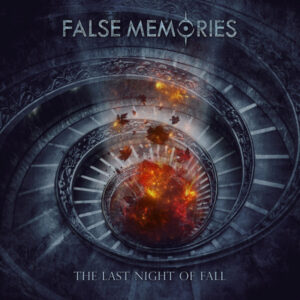 A new arrival at the Frontiers Records label for 2021, Italy’s False Memories were promoted in their pre-release materials as leaning towards “a gothic, doom metal vibe”. Although the band’s darker tones are something of an interesting move for a label that predominantly deals with melodic metal and a wealth of old school AOR, massive hair and the occasionally misjudged leather trouser, it soon becomes clear that nobody at the label has a clear idea of what “doom metal” actually entails. You won’t find any eight minute epics on this band’s third release ‘The Last Night of Fall’, nor will you find anything dominated by deep, booming voices, or any riffs that could be considered oppressively slow. Occasionally, the band unleash something of an unexpected heaviness – as is the case with album highlight ‘Deep Breath’ – but, in the main, False Memories have a strong relationship with a melody and something of a “safe” feel. In short, for all of the hard sell with a focus on darkness and heaviness, the label have signed their own Nightwish. False Memories can be a little more intense and often more interesting, but they definitely sit more within that musical sphere. For the more adventurous melodic rock fan, such a familiar Euro-goth sound should be enough to warrant a purchase, but this in no way should be considered “doom metal”. Luckily, despite an over familiar sound and the possibility of finding themselves in something of an over saturated market in terms of style, False Memories come armed with some decent songs, and in Rossella Moscalletto they have a very self-assured vocalist.

Following an intro where treated vocals and thin piano set up a basic melody and rhythm, the opening track ‘Black Shades’ sets up the band’s sound rather simply via a floaty melody where the vocal takes centre stage. Shifting into melodic metal riff where the heavier tones are contrasted by an equally bright vocal, there’s little doubt that Rossella has a great voice, but by the time the band settle into the second verse, everything seems to come so much from the Within Temptation and Nightwish school of light gothic metal, it becomes a little too safe. That’s not to say that lovers of this style won’t like it – chances are, they’ll love it – it’s just that with the talent on board, you might find yourself hoping the band would branch out a little further. A brief instrumental break bringing a slight prog metal slant certainly adds a little more of a necessary interest and shows that Francisco Savino and Moreno Palmasano make a great team, but that mightn’t necessarily be quite enough for the more demanding listener.

‘Rain of Souls’ settles into even more of a comfort zone, offering little more than an identikit Nightwish tune from a decade earlier. As before, though, there’s a lot to like about the vocal performance, and the way the band handles a huge melody seems very natural, but there’s still a feeling that False Memories are capable of delivering a little more than they do here. The first fantastic musical rewatd arrives with track four, ‘Hysteria’, which finds the band shifting a little further into prog metal territory. The arrangement opens with a really cool off-kilter piano riff, loaded with off-key notes before muted guitar chords dance around a wonky, almost waltz-like time signature. This really comes into its own by the second verse when the slightly spikier arrangements challenge the vocal for dominance, and the dirtier guitar sound provides a great counterpoint to a very clean vocal. There’s still a great deal at play that could be easily likened to the many Within Temptations of the rock world, but between the slightly proggier groove – unexpectedly, there is a very much a groove here – and a superb vocal, it’s clear these guys could more than hold their own, despite a lot of similar competition.

The use of a few jagged thrash riffs contrasted with a cold goth rock lead during the intro of ‘Deep Breath’ immediately sets up another of the album’s more interesting arrangements. By tackling something heavier, the band’s abilities with a massive riff becomes abundantly clear, and the way the heaviness is underscored by brilliant meaty bass groove during the verse suggests someone within the ranks is a great arranger. The mix of heaviness and clean vocals makes this another highlight despite not offering anything radically different, while the superior ‘White Crows’ takes a similar sledgehammer riff into even better places due to Rossella really pushing her vocal range. Unexpectedly, during the opening of this track and subsequent chorus, she manages to channel the shriekier sounds of Paula Cole circa 1997, but thanks to the all-round crunch, such extremes feel quite natural. Coupling that with a couple of quieter movements where the gothic traits sound alternately like something on loan from Danny Elfman and some faint industrial tinged coldness, there’s plenty packed into these four minutes – it’s almost a complete False Memories showcase in itself. ‘Sea of Nothingness’, meanwhile, strips everything back to basics with a very Nightwish sounding affair, but as before, a few listens will uncover just enough to hold the melodic metal fans’ interest, especially with an increased use of synth strings and a dark, brooding riff carrying through one of the record’s denser arrangements. The production is good enough to bring clarity, though, and although Savino and Palmasano favour something of a grungy sound here, the contrasting vocals and bell-like keys bring more than enough in the way of a strong gothic melody. If you can make it through that, a brief semi-acoustic interlude offering a slightly folky lilt, coupled with a clean, soaring guitar setting up a great lead break will almost feel like a burst of sunlight.

Picking up the pace, ‘Erased’ opens with a hard edged, choppy riff set against electronic treatments, and this suggests something very interesting is afoot. Upon reaching the verse, however, they totally wuss out and work through some Euro-goth by-numbers sounds, where Rossella’s voice dominates. As before, there’s absolutely nothing wrong with this – False Memories have more than proved to be great at it – but tracks like ‘Hysteria’ and ‘White Crows’ have shown the band to be more than capable of better. That’s not to say this is bad, of course; some more on point lead work and a strong vocal performance come together in fine form, and even though it’s all very predictable, it’s an enjoyable listen in its own way. In closing, ‘Don’t Forget’ winds everything down with a descending guitar riff and synth strings, before the expected crash of a heavy, neo-gothic riff brings another final burst of moody goodness. A bass heavy verse gives Moscatello plenty of room to move and – as with half of the album – this very much feels like her show, but as before, closer listening uncovers various nice flourishes. From a clean and almost bluesy lead guitar filling spaces, and an extra layer of ringing guitars calling between the slabs of heaviness, it offers enough interest, but the best moments come from a very 80s sounding lead that, although far too low in the mix, is very well placed in terms of creating a necessarily climax.

There are various aspects to this album that feel about fifteen years out of date at the time of its release, but that really shouldn’t stop fans of the style finding plenty to enjoy. Between Rossella’s soaring vocals, a few great hooks, and a sound that comes with a decent crunch pretty much throughout, ‘The Last Night of Fall’ is a very confident work. It mightn’t be groundbreaking – and it certainly isn’t doom metal, or even especially doomy by any stretch – but its all played with conviction, and in many ways, that’s more than enough to see it through. If you’re looking for a slice of chunky but melodic metal, something that isn’t too challenging but still finds time for the odd distinctive twist, then this album should more than hit the mark.