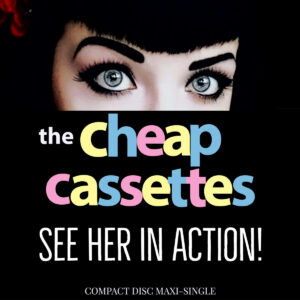 Everything about The Cheap Cassettes’ first full length album ‘All Anxious, All The Time’ did, indeed, scream “cheap”. It’s ten songs sounded like old demos and the choice of artwork – complete with basic Microsoft Word style font – really didn’t give the strongest first impression. However, if you were able to make it past those cosmetic flaws, some of the songs suggested a retro band with a big heart and an even bigger gift for delivering a hook.

Their ‘Kiss The Ass of My Heart’ EP – delivered some four years later, via the Rum Bar Records label – presented a marked improvement. The core of the material came with a much better audio quality and in the case of the title track, it almost felt as if you were eavesdropping on a long lost demo from The Knack. From such rough beginnings, it was more than clear that The Cheap Cassettes were a band with great promise…and indeed, the EP gained some really positive – and well deserved – press from various power pop blogs around the globe.

Originally released as a digital three tracker in 2019 and expanded and reissued on CD in 2021, ‘See Her In Action!” finally delivers a mini masterpiece. While its three studio recordings don’t necessarily branch out too far from the sounds sharpened on the previous EP, their audible crunchiness lends a great deal to its chorus heavy material. The title track wastes no time in offering a great riff when ringing guitars throw out something akin to ‘Let It Be’ era Replacements, before the verse drops into something that’s a cross between an old post-punk band and rock ‘n’ roll revivalists Watts. Frontman Charles Matthews has a voice that has a fair amount of grit and no care for perfection – but for all of the sloppiness, he delivers a performance with a big heart; his kind of slurred and freewheeling attitude evokes peak Westerberg. The rhythm section latches onto a tight but loose approach throughout, suggesting the work of a hardened bar band, which – ultimately – allows the Cassettes to deliver this number with a massive confidence. Often, great songs deserve more than a one line hook, but given this trio’s love of all things trashy, the repetitious “see her in action” that runs through the bulk of this energy fuelled performance is honestly all that’s required to make it stick. If you like the style, it’s almost guaranteed you’ll love this.

Moving into ‘Only Lovers Left Alive’, the energy is increased via some brilliant rock ‘n’ roll swagger delivered by a shrill lead guitar, before introducing the kind of verse that sounds like bar room rock 101. Thanks to a spirited vocal and a shameless flaunting of some serious Replacements love on a great hook, it’s immediately cool. Charles is backed by the kind of ragged harmonies that would suit label-mates The Dirty Truckers and The Cheap Cassettes steer a tried and tested style to glory. Chuck in a rollocking lead break and – generic or not – it becomes one of the band’s best tunes to date. Best of all, though, the short and punchy ‘Lil’ Bit Everyday’ really shows off The Cheap Cassettes’ musical credentials as they hammer through a tune that fuses the proto-punk sounds of The Real Kids with the kind of simplistic hook UK mod band The Jags would’ve propelled up the chart back in ’79. The natural vocals on the track actually add so much to an already familiar melody – especially appealing for those people who still reach for those albums by the skinny-tie power pop brigade – while the riffs on the verse actually sound a little like a much tighter version of their sometime label-mates Indonesian Junk. It’s a great exercise in whipping up a retro past, and it takes barely two minutes to deliver on all fronts.

The CD reissue gives potential fans extra value with the addition of a pair of live recordings, and although these maintain a certain roughness, they also give a fair representation of the band in their sweaty, natural habitat. The previously unrecorded ‘Red Line Blue’ blends more Replacements love with something that sounds more like Indonesian Junk than ever. The audience sourced recording misses so much from the vocal – Charles sounds miles away and ultimately drowned out by his own guitar – but even so, there appear to be the roots of a decent tune here, while a cover of The Replacements’ ‘Valentine’ (taken from a different show and in a much better fidelity) finally delivers on all of the homages within the Cassettes’ own catalogue. When heard waist deep in this ‘Pleased To Meet Me’ era tune, the band sound truly at ease, almost as if their very reason for being is to become Seattle’s best loved Replacements tribute. The recording, although still raw, accentuates their abilities as a power trio, and more than the studio takes, really shines a light on Mike Isberg’s tough bass sound.

It may still be far too short, but with its combination of studio tracks, live material, new songs and a well played cover, the expanded ‘See Her In Action!” EP plays like the ultimate Cheap Cassettes primer. If you’re a big Replacements fan, you owe it to yourself to hear these guys tackling ‘Valentine’, but more than that, you owe it to the band to stay for the rest. This EP is so much fun: in terms of ragged garage pop/power pop with an instantly familiar sound, you won’t find much better.