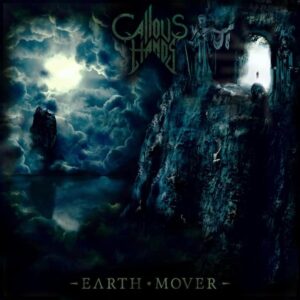 At the beginning of 2021, Callous Hands were still a relatively new band. They’d played a handful of gigs and shared a few digital singles via their Bandcamp site, but hadn’t yet released a full debut recording. Plans had been made to record an album during 2020, but – like most other bands without swanky home studios – the lads had their plans derailed by the Covid-19 pandemic. Determined to make their mark in a rapidly failing world while dealing with line-up changes, the Brummie heavyweights still managed to record three tracks during the spring and summer, resulting in the ‘Earth Mover’ EP.

So, the debut album effectively became a debut EP, but in this case, it’s very much a case of quantity over quality, since its three tracks deliver some absolutely bloody massive riffs. …And ensuring those all important first impressions stick, Callous Hands have presented three performances that are markedly different from each other. Sure, in the band’s own words, it’s all “as heavy as fuck”, but there are enough musical twists and obvious variety to entertain all but the most demanding metalhead.

The strongest effort, ‘Heed The Call’ takes the most oppressive elements of groove metal, throws in a few melodic progressive death metal flourishes, and applies a massively throaty vocal to the most intensive hardcore/progressive metal hybrid you’re likely to find. Throughout the five minutes, the whole band are on fire. When traversing the twisted technicalities of a busy verse where frontman Kieran absolutely vents against a classically heavy riff, or dropping into a massive hardcore/groove metal breakdown that shows some amazingly tight riffs set against a heavy triggered drum, you’ll experience a metal band that sound as if they have decades’ worth of experience playing together. More unexpectedly, the performance takes a massively melodic turn during the coda, when the pneumatic edges give way to a more spacious arrangement where guitarist Eddy offers impeccably played soaring notes, almost as if he’s auditioning for a prog band. When all of this is experienced together, it becomes greater than the sum of its parts – a must-hear for all fans of tech-heavy extreme metal sounds.

Elsewhere, ‘Luf’ blends some classic metal riffs with a hardcore stance, quickly setting up a sound that draws heavily from ‘Wrath’ era Lamb of God. As with the other Callous Hands recordings, it’s by no means a straight copy; they dress the familiar sound with harder mechanical edges, always making a huge feature from triggered drums, some sharp as hell riffs and the kind of extra complexities you’d find on a classic Gojira disc. Atop the classic, modern metal sound, Kieran puts in another powerhouse performance, ensuring this absolutely slays throughout, while the even more aggressive ‘Orchestrated Primal Screams’ takes the bulk of their hardcore sound and intersperses the jagged heaviness with brief passages of sludge coupled with doomy vocals. Eventually settling into a spiky yet buoyant groove that sounds like a cross between one of Slayer’s mid-tempo breakdowns and ‘Enslavement’ era Soulfly, there’s even time for Callous Hands to tip the hat to some classic thrash, making this number a genuine tour de force when it comes to a riff or six.

While the individual elements here may not be new, the way the band throws each of their influences into a musical blender creates something as exciting as you’ll find for the style. Yes, it’s pretty much all “as heavy as fuck”, but it’s also brilliant. The material carries so many twists, you certainly won’t feel it’s merely generic. Even if there’s a lot about their craft which feels instantly familiar, it’s impeccably played and when heard at volume, it really hits the mark. Maybe being sidelined by a pandemic wasn’t such a setback after all: with this “three songs and out” approach, there’s every chance that the band’s overall impact has actually been increased. With ‘Earth Mover’, Callous Hands deliver a fantastic debut, quickly setting themselves up as a band to look out for.