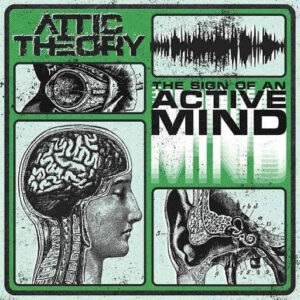 It’s also clear that whoever sequenced this release genuinely understands the importance of making a great first impression. The disc’s opener ‘Marionette’ might not carry the biggest of choruses, but in terms of shouty refrains and enormous, swaggering riffs, it hits like a juggernaut. From its opening stompy riffs overlaid with a brief wailing lead, the band are instantly able to grab your attention; moving into a drum heavy verse, the track sounds like hard rock battle hymn, further exploring the band’s tough sound. At this point, if Attic Echo have pricked your ears, you’ll be ready and waiting for the big punch. Finally – attacking what acts as a brief chorus hook – frontman Lewis Wright unleashes a louder tone, and the combination of dirty riffs and gravelly vocals ushers in some classic vaguely alternative sounding hard rock. None of this sets out to bring listeners anything new, but what it does, it does well and – something surely not lost on the band themselves – it all sounds ten times better with the volume cranked.

Capturing the very best of Attic Theory’s emotive style and aggressive riffs, ‘Cold Heard Reality’ shows off more of a melodic verse driven by clean guitar sounds, before diving into a chorus where huge riffs crunch with the kind of sound you’d fine on one of Tremonti’s albums. Naturally, such a hard and jagged sound suits the gruff vocals throughout, but if anything really makes this track, it’s the twin guitar attack from Tim Cunningham and Peter Donnelly, whose skills shift between the verse’s chopping, melodic hard rock moods and the chorus’s dirtier riffs with ease. More importantly, the number’s lead break comes with the kind of melodic fury previously brought by many of your 80s heroes.

Although the EP format keeps Attic Theory restricted to a brief musical remit, they really aren’t afraid to mix things up and demonstrate their gift for recycling different classic rock and metal styles. ‘My Own Design’ takes an abrasive hard rock sound and covers it in a blanket of vaguely alternative beats and distortion, resulting in the kind of rocker that’s more than solid. Again, Lewis shows a great vocal confidence and the riffs pack a decent punch for a DIY release. ‘Saints Among Us’ cranks a much dirtier riff suggesting this band could really embrace an intensively heavy sound, and there’s even time for a proper old school homage when ‘Doesn’t Matter’ kicks off with a high octane riff that calls back to the glory days of the early 80s and the New Wave of British Heavy Metal. Introducing a much more abrasive approach, the lads show a natural gift for high octane old school metal; if you’re a fan of the speedy twin leads of Tygers of Pan Tang and Praying Mantis, bits of this track will surely raise a knowing smile, despite being overlaid by a vocal melody that’s much closer to the rest of Attic Theory’s usual fare.

Best of all, ‘Your Light’ allows Wright to explore a more soulful side to his voice. Much like Big River’s Adam Bartholomew, he shows off a decent range and volume throughout these recordings, but really comes into his own when scaling things back. Despite showcasing a superior rock croon, it’s also a track that exploits Attic Theory’s furthest musical extremes: with verses taking a bluesy bent, the song sets itself up as the ultimate power ballad with universal themes of love and loss, and then – bang – the chorus crashes in with the heaviest riff on the whole release. Taking elements of Killswitch Engage and early Disturbed and transposing them in more of a classic/melodic rock way, Attic Theory become a musical sledgehammer. The weight and tone of these riffs is astounding and although it isn’t always easy on the ear, the way Wright manages to equal them with volume is impressive. In terms of a rock band showing absolute belief in their material and performance, if this doesn’t win you over, nothing will.

As you’d expect from an EP as varied as this, some tracks work better than others, but whichever suits Attic Theory best will be solely down to listener preference. What links the material effectively, though, is a particularly old school heart: we’re not always talking sweaty leather trousers here, though, but far more of a retro quality in the Candlebox/Creed mould. For lovers of the more melodic end of the 90s alternative spectrum and classic rock with a heavier slant, this release is definitely worth exploring.